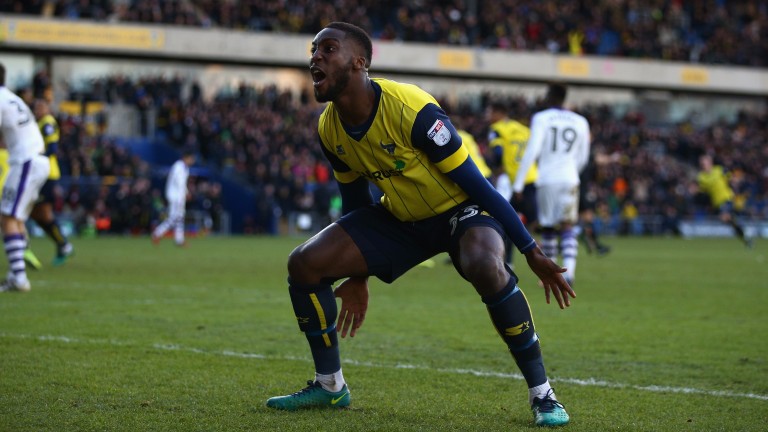 Oxford v MK Dons
Cup kings Oxford can get back down to business in the serious stuff of Sky Bet League One by landing a telling blow against MK Dons at the Kassam Stadium.

This is a key game given both have ground to make up on sixth-placed Southend in what is sure to be a scrap for the last playoff position that sees 13th-placed Oxford and 14th-placed MK Dons only six and eight points respectively off the pace.

The table says Oxford, two points better off with a game in hand, are a slightly better side than MK Dons and the shot statistics which are often a great performance indicator suggest there is little between the sides with both probably better than their positions indicate.

Milton Keynes (second) and Oxford (third) are riding high in the shot ratio (share of match shots) statistics, while in shots on target Oxford are fourth and the Dons joint-sixth.

Throw that together with the league table and these sides are clearly closely matched, which makes the fact that bookmakers cannot separate them more baffling given little seems to have been factored in for Oxford's home advantage.

Oxford, through to the FA Cup fifth round and the semi-finals of the EFL Trophy, have won nine of their last 12 matches and that includes home victories over Newcastle, Bradford and Scunthorpe as well as a stunning 4-0 triumph at Rochdale's Spotland fortress.

MK Dons are also going well with three wins in four. with a 4-0 thrashing of Peterborough the highlight, but they should not be considered the equals of Oxford at the Kassam.

Millwall v Southend
Oxford have a trip to Middlesbrough waiting for them in the FA Cup fifth round, while Millwall are at home to Leicester thanks to a memorable run which started with a home win over Southend.

However, the Essex side can get their revenge with a positive result at the Den to follow up a deserved 3-1 league success over the Lions in September.

Phil Brown's travellers have lost one of their last 17 league matches and that was 4-2 against leaders Sheffield United when Southend changed to a midfield diamond with a negative outcome, although the Blades scored with all four shots on target.

They have bounced back brilliantly with home wins over Rochdale and Scunthorpe and an away point at Fleetwood, who equalised in injury-time.

Millwall are unbeaten in ten matches but they have drawn four of their last five league games and look a little short at odds-on prices.

Colchester v Barnet
It could be the perfect weekend for Southend if they do their job at Millwall and local rivals Colchester suffer at the hands of Barnet in Sky Bet League Two.

Much like Millwall, Colchester look too short for a side who are winless in three. Even worse than the results, their performances have dipped with barely-deserved draws at Newport and Blackpool between a 4-0 thrashing at Exeter.

Barnet are not as good as Exeter but they have lost only three of 14 Sky Bet League Two matches on the road this season and those defeats came at Doncaster, Portsmouth and Luton - the front three in the ante-post betting for promotion.

The Bees were excellent on their last away trip, a 1-1 draw at Carlisle with ten men when they were the better side.

Carlisle v Blackpool
A Charlie Wyke goal put Barnet on the back foot in Cumbria but it could be a tough final few months of the campaign for Keith Curle's side following the departure of Carlisle's 14-goal forward to Bradford.

Replacement Jamie Proctor scored in last week's 2-1 win over crisis-club Leyton Orient - Carlisle's first success of 2017 - but he was later sent off and is suspended for the visit of draw-specialists Blackpool.

The Tangerines have gone ten games without a win in all competitions but they have suffered only two defeats in that time and the probable return of forward Kyle Vassell is a major boost.

There is the potential for Vassell to play alongside Jamille Matt and when those two have started Blackpool's record is P10 W7 D1 L2.

Banker
Lazio 4-5
Milan beat Bologna 1-0 with nine men on Wednesday but their squad is now decimated by injuries and suspensions and Lazio should be worth the wait for Monday's match. The Romans have won ten of 12 home games, excluding the derby with stadium-sharers Roma.

Blowout
Colchester Evs
Take your pick from the three lays in the main column but of the trio Colchester are arguably the most vulnerable with Barnet continually underrated by the layers.

Hotshot
Timo Werner 9-2
The Leipzig forward has scored first in four of Leipzig's nine home games this season and he has notched in each of his last five outings at the Red Bull Arena. Hamburg could be on the end of a Werner backlash after Hong Kong flu kept him out of last week's defeat in Dortmund.

Whenever the England national team exit a competition a lack of passion is often cited as a reason, while it is also used as a stick with which to beat managers who prefer to sit stony-faced in the dugout.

So how bizarre that Huddersfield's David Wagner was criticised for charging down the pitch to celebrate Town's dramatic winner against Leeds last Sunday.

The German had every right to go crazy - it was a last-gasp goal, in a derby with both teams fighting for promotion - but Leeds boss Garry Monk saw things very differently.

"They're my values; humility, respect and class, and I don't think he [Wagner] showed that," said Monk afterwards.

Monk may want managers to act like, er, monks, but it's all part of the razzmatazz of the greatest sport in the world.