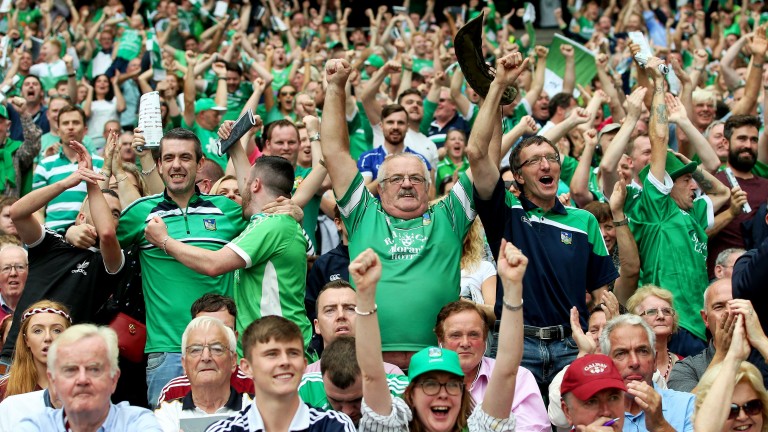 Should Limerick be favourites to retain the Liam MacCarthy Cup?

Patrick Aherne Paddy Power
I think they should be joint-favourites. Munster is an absolute bear pit with five really good sides and they have a giant target on their back.

Shane Foley Jockey & hurling fan
They deserve to be favourites. They were the best team in 2018 and they have looked the best team so far in 2019 so it is hard to find any negatives about them at this stage.

Darren Hughes BoyleSports
They’re favourites with us at 11-4 and next best in our market is 5-1 so that’s as clear a yes as you can get from this camp.

David Jennings Racing Post
I don’t think so. Would you be surprised if Cork, Galway or Tipperary won the All-Ireland? I certainly wouldn’t so it is no surprise to see the market so open.

Jim Parker Ladbrokes
They have impressed this season but I don’t think they are as far ahead of the pack as some commentators are saying. Very few teams were showing their full hands in the league, while Munster is going to be tricky to get out of. They are rightly favourites but shouldn’t be any shorter than they currently are.

Which top team could struggle this summer?

PA At the prices we’re happy to lay Limerick. Their trip to Walsh Park will be very tricky against Waterford and Cork and Clare will feel they’ve unfinished business after last year.

SF Kilkenny could struggle. They are hampered by injuries and now Joey Holden is out too. He’s a huge loss so it’s going to be tough for them to make a mark.

DH It might sound daft, but I have a feeling Galway will struggle to reach the semi-final stage.

DJ Dublin and Wexford seem poised to have successful summers so it would come as little surprise should Kilkenny find life tough, especially with so many injuries to key players.

JP At the outset I felt Kilkenny would have a strong year but they have been unlucky with injuries in defence. Eoin Murphy, Cillian Buckley and Conor Delaney in particular are big losses and they could struggle to get out of Leinster, especially with Dublin and Wexford both going well.

Give us one player who can take the championship by storm this summer?

PA Cathal Mannion had a very good league and a new free role around midfield is playing into his strengths.

SF TI am a big fan of Declan Hannon and I have a feeling he can be the one to guide Limerick to back-to-back All-Ireland Championships. He dictates everything from centre-back and is a terrific playmaker.

DH John Conlon from Clare is a classy customer who is only going to get back and I can’t wait to see him dismantle defences this summer.

DJ Seamus Harnedy is a class act and makes Cork tick. Expect him to light up the Munster round-robin series once again with his flair.

JP Peter Casey looks a real threat every time I see him and seems to have nailed down a regular spot in the Limerick full-forward line. Away from the main contenders, Danny Sutcliffe  looks to be back close to his All-Star form and should have an excellent year.

Who are your picks for top scorer and Hurler of the Year?

PA Jason Forde could take on more free-taking duties for Tipperary and could rack up a nice tally if they come in Munster’s top three.

SF Declan Hannon would be my Hurler of the Year pick and I’ll opt for TJ Reid for top scorer. He was third in the scoring charts last year with 2-63 and is deadly from frees.

DH Peter Duggan would be my idea of top scorer, while John Conlon could have a big say in the Hurler of the Year award.

DJ Patrick Horgan scored 2-46 in his six games last year and, in expectation of Cork reaching an All-Ireland final, he could top the scoring charts. His teammate Seamus Harnedy could be the one to collect the most coveted gong if the Rebels rule this year.

JP There are question marks over who will take the frees for at least three of the main contenders. Aaron Gillane will be hard to beat while Oisin O’Roourke is each-way value especially if the Dubs finish third in Leinster. For player of the year, either Seamus Harnedy or Darragh Fitzgibbon for Cork.

What is the best bet in any market?

PA Galway to win the All-Ireland Championship. They looked good value at the current prices. Injuries are piling up for other teams in Leinster and, with Canning back for the business end, they’ll be tough to beat.

SF I’d have to say Limerick to win the All-Ireland Championship. Even at their current odds they are still value.

DJ Cork to reach the All-Ireland semi-final at 5-4 with BoyleSports. The 6-1 about them lifting Liam MacCarthy appeals too but it’s better to play it safe and bank on them reaching the last four.

JP The injury to Eoin Murphy has left a lot of value in the All-Star goalkeeper market. Nicky Quaid at 3-1 and Anthony Nash at 5-1 look excellent prices.

Who lifts the Liam MacCarthy and why?

PA Galway are the value option at the prices with an easier route than all the other Munster teams. The return of Joe Canning in time to inject his quality into the All-Ireland series is another plus.

SF Limerick. They are a very young team who will benefit from the experience of last year. Their confidence must be sky-high and they have no injuries worries. There are good vibes coming out of the camp.

DH Limerick. I am convinced they have improved from last year. They topped Division 1A of the league and were pretty comfortable winners of Division 1 as well. Galway would be dangerous but they have a lot of hurling to do before Joe Canning returns to the side.

DJ We have short memories and all anyone can remember is Limerick from last year. However, Cork were every bit as good as them in the All-Ireland semi-final and now have a squad capable of going the whole way.

JP There are six realistic contenders but for me it’s Cork. They should have reached the final last year and are one of the few teams that can match the speed and physicality of Limerick. The addition of Aidan Walsh adds another dimension to their attack.