Otaegui onslaught can continue in Crans

Improving Spaniard to maintain his gallop 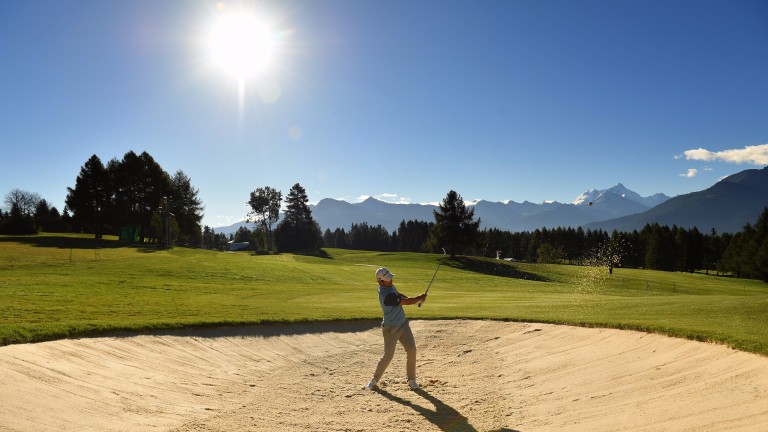 Tournament starts 7.30am Thursday
Live on Sky Sports Golf from 10.30am

Palmer's top tip
Adrian Otaegui 40-1
The FedEx Cup playoffs are having a half-time interval, so all golfing eyes are feasting on the beautiful Crans-sur-Sierre and enjoying magnificent views of the Swiss mountains this week.

The first two days of the European Masters are set to be played in perfect conditions, showcasing the wonderful venue, but rougher weather is expected for the weekend. Joyous Spaniard Adrian Otaegui will be looking forward to tackling whatever Crans throws at him and the dashing youngster is the best value option.

Otaegui is in the form of his life. The maturing 24-year-old landed his maiden European Tour title in the Paul Lawrie Match Play last month. He was three down after nine holes of the final, trailing local hero Marcel Siem in Germany, but bravely won six of the next eight holes.

Otaegui has made the step up to European Tour champion and the elevation had been coming. He burst into life at the start of July, finishing seventh in the French Open, and followed up with 20th spot in Ireland, 19th in the Scottish Open and fifth in the European Open, before his Match Play breakthrough. A first strokeplay triumph could quickly follow.

His Crans form figures of 40-53-58 are unspectacular, but solid enough for a Tour newcomer making his way on the circuit. His worst round on this layout is 72 and with the confidence gained from his heroics last time out, much better can be expected this year. With a game based on driving accuracy and sharp putting, Otaegui is well suited to Crans.

As a nervous maiden in 2013, Otaegui finished runner-up in the Rolex Trophy, a Challenge Tour event staged in Switzerland. He was beaten by a single shot. And his best finish of last year came in neighbouring Austria, another one-shot defeat in the Lyoness Open. He is clearly comfortable in this part of the world.

The poor weather forecast for this weekend will not concern the selection, either. Several decent efforts in Britain and Ireland prove this Spanish bull can perform without the sun on his back. There are reasons for believing the market leaders may disappoint at short prices and there is plenty of juice in 40-1 Otaegui.

Next best
Benjamin Hebert 80-1
Dylan Frittelli demonstrated in the Lyoness Open in June how positive vibes for a country can create tournament-winning form – both his maiden Challenge Tour title and his European Tour breakthrough came in Austria. Benjamin Hebert may repeat the process this week.

Two of Hebert's six Challenge Tour victories came in Switzerland, including his first one, the 2011 Suisse Challenge. The Frenchman romped to a four-shot victory. His Crans record is nothing to write home about – 61-MC-36 – but he closed with three 68s last year and has arrived at the tournament this time with more self-belief than ever.

Hebert has been pleasing his bank manager this season, starting with fourth place in the Alfred Dunhill Championship. Consistently good golf has followed, the highlights being eighth place in the Nordea Masters, eighth again in Ireland, and sixth spot in Denmark the week before last.

The strength of Hebert is his precision – he lies 11th in the driving accuracy statistics and third for greens in regulation – and he is well suited to the demands of Crans. As with Otaegui, vast improvement on his previous Crans spins looks likely.

Jazz made his Asian Tour breakthrough in February, courageously winning the Bangladesh Open by four shots, fending off local hero Siddikur Rahman. Another victory followed on the Mena Tour in May, and a hot summer has resulted in two runner-up finishes.

Jazz was beaten by a shot on the Asian Tour in the Queen's Cup in June, then was second again in the Fiji International last time out, a tri-sanctioned event with European Tour representatives. Making his tournament debut in Fiji, he opened with a 74, improving his score each day and closing with a sensational 64 through which he missed only one green in regulation.

Jazz has some Crans experience to draw upon – he opened with a 65 as a nervous teenage debutant in 2015 before dropping to 37th place, and he missed the cut last year.

Expect a bold effort on his third visit from a player riding the crest of a wave this year and viewing any further success as a mere bonus. The youngster spent a fortnight living as a monk last Christmas and credits his time in the temple for creating the inner calm which has aided the best season of his career.

Others to note
Bernd Wiesberger
The Austrian, a consistent ball-striker playing close to home, is the most tempting of the market principals. He has not been firing on all cylinders in recent weeks, though, so the price is not quite large enough to warrant an investment.

Alexander Noren
The favourite is a two-time Crans champ and the world number 12. He boasts obvious credentials, but got married last weekend and has not been as busy as usual on the range. Hard work has been key to his success – few players practice as much – but the Swede may not find top gear this week.

Tommy Fleetwood
The Southport man is enjoying a career-best season and has two Crans top-ten finishes to his name, but he has not played since the USPGA and his first baby is due next month. He may not be at full throttle.

Matthew Fitzpatrick
The accurate Sheffield star possesses all the tools to tame Crans, where he was runner-up in 2015, but he has not bettered 35th place in his last eight tournaments.

Chris Wood
The lanky Bristolian is one of the best players in the field, but, like Fitzpatrick, he has been largely unimpressive this summer.

Thomas Detry
The talented Belgian youngster looks like a winner waiting to happen on the European Tour. He may need time to settle, though, on his Crans debut.

When to bet By 7.40am on Thursday
Where to watch Live on Sky Sports from 10.30am on Thursday
Time difference Switzerland is one hour ahead of the UK and Ireland.

Course overview The tournament was played the week after the Open Championship in 2015 – in July rather than September – but moved back to its traditional slot last year. The famous Crans layout, renowned as one of the most beautiful in the world and with views to die for, was opened in 1908.

There has been a European Tour event staged there every year since 1972. A Seve Ballesteros redesign in 1999 made it much tougher, creating lots of run-off areas around the greens. This made approach shots difficult to keep on the putting surfaces and made chipping more challenging too.

It has average-size fairways but its mountainside location means most of them are either severely uphill or downhill. The sixth and seventh are driveable par-fours where players are looking to pick up shots. Small, firm, unreceptive greens are the main problem for the competitors, although they are aided by the fact that the ball flies further than normal at the altitude.

The story of last year Alex Noren defeated Scott Hend with a birdie at the first extra hole of a playoff, the pair having tied on 17 under par.

Weather forecast It could be a game of two halves. The first two days should be clear with sunny spells, but showers and sleet are expected for an unsettled weekend. Light breezes are likely throughout.

Type of player suited to challenge Length is useful for gamblers on the two driveable par-fours, but overall this is a track where accuracy from tee to green and course-management are the keys to success.