Osaka may find it tougher to stop Serena Williams

Japanese ace could struggle to repeat Miami victory over legend 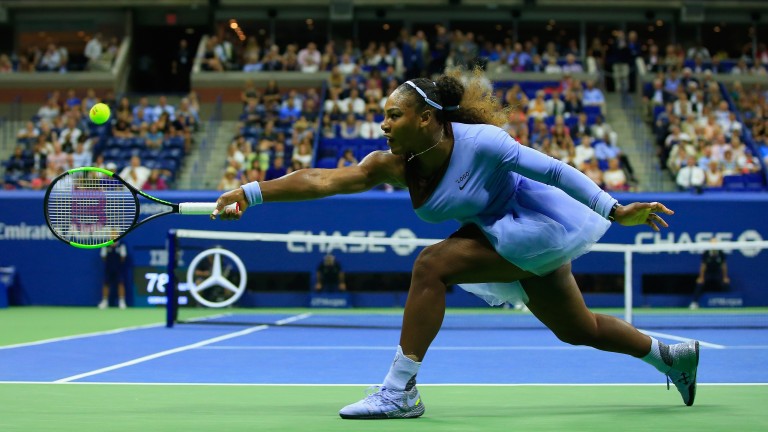 Serena Williams reaches wide on her way to victory over Anastasija Sevastova
Chris Trotman
1 of 1
By Adrian Humphries 8:00PM, SEP 7 2018

The US Open, coming as it does towards the end of the season, is the Grand Slam in which there should be no excuses formwise – the injury-free players are pretty much fit as fiddles – and this year's Flushing Meadows tournament has produced a cracking women's final.

The title decider pits the best older player in the game, Serena Williams, against an opponent who has viable claims to being the best youngster in the sport, Naomi Osaka.

The problem for the newbie is that her seasoned rival is also unquestionably the best player in their sport's history.

Osaka, 20, has the boon of having a victory to her name over Williams – a 6-3 6-2 triumph in Miami which came immediately after her title triumph in Indian Wells.

But with the element of surprise now gone, it could be bounce-back time for former long-time world number one Williams, who is hoping to equal Margaret Court's all-time record of 24 Grand Slam singles crowns.

The American reckons she won't be seen at her best until next year. But given that Williams can ease past most rivals when playing well below her peak, punters may be wise not to pay too much attention to those comments.

The fact that Osaka, the first Japanese woman to contest a Grand Slam final, will be facing her childhood idol could be more important.

Osaka, born in the Japanese city of the same name, was just one year old when Williams lifted her first Slam singles title in New York in 1999. She moved to New York aged three and spent her formative years in the Big Apple before relocating to Florida.

Williams and Osaka have each dropped only one set in this year's tournament – Williams in her fourth-round thriller against Simona Halep's conqueror Kaia Kanepi and Osaka against New Haven champ Aryna Sabalenka.

There is also not much between the final combatants in terms of first service speed, with Williams peaking at 120mph and Osaka at 119.

But whereas Osaka's highest ace count was nine in her three-setter with Sabalenka – her best tally in two sets has been only five – Williams registered a whopping 18 in three sets against Kanepi and has posted 13 aces in a couple of two-set outings.

Williams also won 24 of 28 points when approaching the net against Sevastova, so there are few weaknesses in her all-round game right now.

Madison Keys had 13 break points in her semi-final clash with Osaka but failed to convert any under the Ashe Stadium roof.

But after losing to Angelique Kerber in the Wimbledon final in July, Williams is likely to be extra keen to get her name on the Slam singles board this year.

This is her last chance to do that so there should be plenty of determination on her part.

Osaka is potentially a much more dangerous opponent than Anastasia Sevastova, who Williams thrashed in the last four, and Kanepi.

The powerful 20th seed is also probably more of a threat to the title favourite than Karolina Pliskova, whose 2016 victory over Williams at Flushing Meadows counted for little in their quarter-final clash this year.

An upset cannot be ruled out, but Williams has been superb this week at finding ways to defeat solid opponents and it could pay punters to have an interest on her posting a sixth straight-sets win.