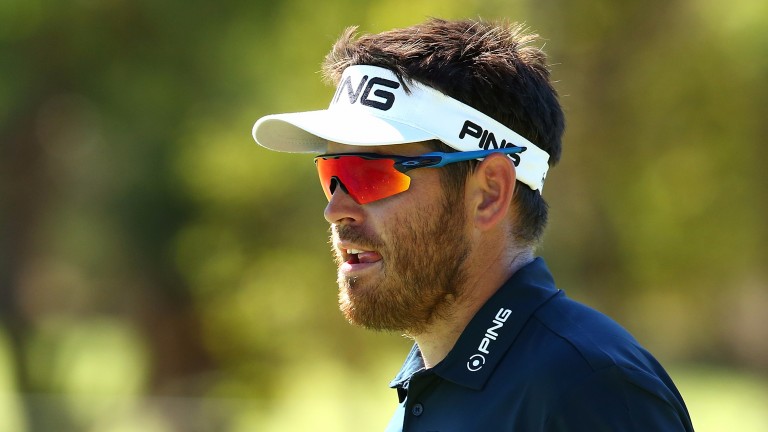 Louis Oosthuizen can emerge triumphant on a tight leaderboard
Paul Kane
1 of 1
By Steve Palmer 10:39AM, MAY 14 2017

The Players Championship field is often the strongest assembled in the entire golfing season and the leading duo after three rounds underline that fact. American duo JB Holmes and Kyle Stanley were 150-1 and 200-1 respectively ante-post, dismissed in elite company, but the purring pair have reached nine under par at the famous Florida layout.

Holmes birdied the notorious 17th hole and made par at the super-tough 18th to set up his Sunday opportunity. Stanley played his last 14 holes without dropping a shot, a fantastic effort on a danger-strewn track, hitting his approach to the 17th to just two feet of the cup.

Lurking over the shoulder of the leading pair is 2010 Open champion Louis Oosthuizen, who holed an 11-ft putt at the 18th hole to stay just one shot behind. Holmes is 7-2 favourite with a round to go, with Oosthuizen 4-1 and Stanley 9-2.

The pre-tournament market leaders have struggled to make an impact. Dustin Johnson shares 44th place at two over par, while Rory McIlroy is in 20th spot, eight shots off the pace. Jordan Spieth missed the cut.

The Players Championship was a difficult puzzle to solve before the start, bookmakers throwing enhanced each-way terms at punters to attract interest in the ultra-competitive affair, and the tournament is still extremely tricky with only 18 holes to play.

The favourite is 7-2 and nine names are 22-1 or shorter, reflecting a tight leaderboard and an open event. Anybody three under par or better will probably still be harbouring title hopes.

Three youngsters with the potential to become top-class US Tour champions are on the board at must be respected. Si Woo Kim and Emiliano Grillo have already registered a victory on the toughest circuit of them all and the precise pair have given themselves a sniff of the prestigious Players crown.

The Korean and the Argentinian, two and three shots respectively behind JB Holmes and Kyle Stanley, will probably be regularly contending for Sawgrass glory over the next decade. Has this particular edition come too early in their careers for them to successfully finish the job?

Patrick Cantlay is the other young gun to consider. Cantlay is a former world number one amateur who is bristling with potential having overcome injury problems. Seemingly fearless and bursting with form, can he make his US Tour breakthrough on one of the most intimidating stages of all? It is a massive ask, but do not rule it out.

Holmes had been in poor nick prior to this week and is a surprise package. There is no urge to support him at skinny prices given how erratic he can be and the numerous water hazards at Sawgrass.

Stanley found an impressive groove on the back-nine in round three, but Saturdays are a different kettle of fish to Sundays, and the 29-year-old has shown himself in the past to be extremely susceptible to final-round nerves.

Kim, Grillo or Cantlay may find the courage to become Players champion and sky-rocket a career, but safer bets for punters are two Major champions who will almost certainly find the Sawgrass pressure more bearable. Louis Oosthuizen at 4-1 and Sergio Garcia at 9-1 are the most appealing options.

Garcia recovered from a slow start in round one with an ace at the 17th and the Masters champion has not looked back since. The Spaniard loves Sawgrass, where he has a victory and two runner-up spots to his name. From just four shots off the lead, the latest member of the Green Jacket club is well in the hunt, but will giving a three-shot start to Oosthuizen prove too much?

Oosthuizen has not finished worse than 48th place all year, hitting his ball solidly, and this week the South African has brought improved putting to the table. He revealed he has been working extremely hard on this department of the game and his stroke has looked excellent this week. When Oosthuizen is putting well, he is a match for anyone, and 4-1 about King Louis is the best outright value available at this stage.

Final-round twoball punters are pointed towards Hideki Matsuyama, who had worked his way to 11th place and in contention in round three until an absolute gutbuster at the 13th hole. The Japanese raider dumped two balls in the water and three-putted for a quintuple-bogey eight.

Betfred may have overreacted to one bad hole by making the world number four 4-5 to beat Adam Hadwin in the 2.30pm (UK and Ireland time) contest.

The leading pair of Holmes and Stanley are due on the tee at 7.30pm. A sunny day with moderate breezes is forecast.