Only way is up for woeful Rams

New coach has to provoke some improvement 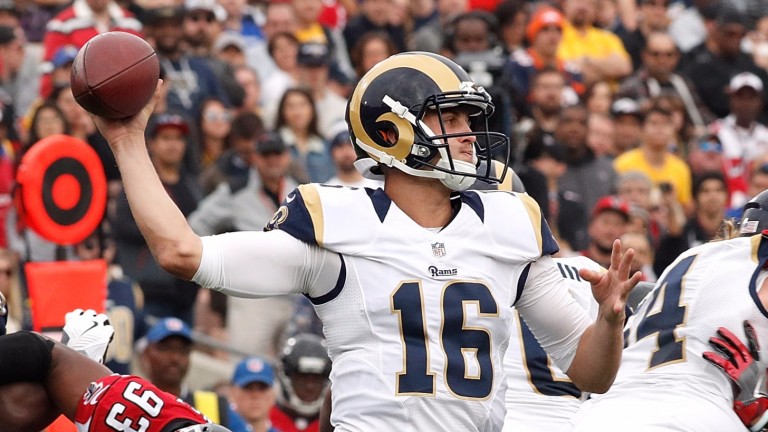 With just three games in the regular season remaining, there will be plenty of NFL teams considering their summer rebuilding jobs and the Los Angeles Rams have started already.

They sacked head coach Jeff Fisher on Monday after a dismal 42-14 defeat to Atlanta - they only posted points after the Falcons had fielded their reserves - and his temporary replacement John Fassel has had just a few days to prepare for a daunting trip to Seattle.

No team have been bigger underdogs this season and with an average of 14.9 points per game, many will fear the worst against the Seahawks' celebrated secondary.

That puts further pressure on number one draft pick quarterback Jared Goff, although it was encouraging to see him score his first rushing touchdown in the dying embers of Sunday's game. Maybe one Ram has a bit of fight left in him.

Despite the huge handicap mark, the Rams did beat Seattle in week two in a touchdownless game in Los Angeles, but worrying for them is that the Seahawks have to pick themselves up from their own disappointment.

Russell Wilson was intercepted five times in a 38-10 defeat in Green Bay last week and although tipped passes meant that they were not all entirely his fault, the quarterback will be desperate for a big performance.

The fact a victory would mean they became the first team to clinch their division should prove a huge motivation, but it is a dangerous game to bank on a team to win an NFL game by such a huge margin.

Pete Carroll's side have won all six of their home matches this season but they have not been at their imperious best for much of the campaign and have benefited from the weak nature of the NFC West.

It is not a match that makes much of an appeal from a betting perspective, but backing the Rams not to be a complete disaster may be worth a small interest, particularly if the Seahawks take their foot off the gas in the closing stages.

A change of coach looks unlikely to provoke an surprising victory, but they should be able to improve a bit. They can't get much worse.

Team news
Los Angeles
Safety Maurice Alexander and defensive end Robert Quinn should be available after concussions, but they may still be allowed more time to recover with the Rams unable to make the playoffs.
Seattle
Defensive end Demontre Moore is still out with a foot injury, but linebacker Brock Coyle could be back after a similar issue. Running back Troymaine Pope is set to sit out with an ankle problem, while full back Will Tukuafu is recovering from concussion.