One football myth that should be shown a red card 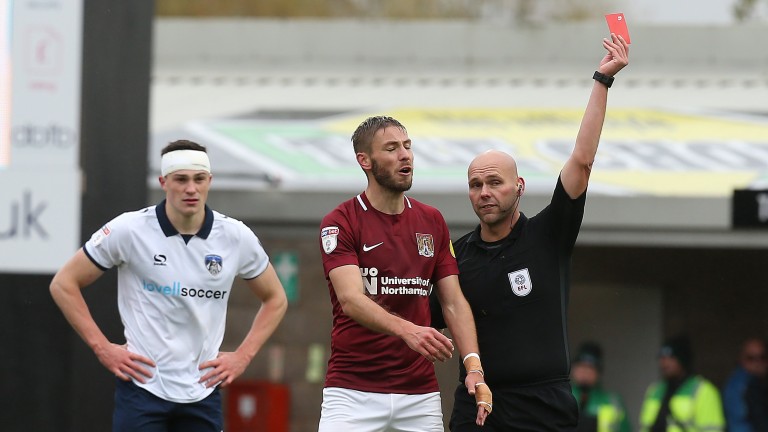 Sam Foley was sent off last Saturday in the 42nd minute of Northampton’s Sky Bet League Two game at home to Oldham. Northampton led 1-0. Three minutes later they scored again. Oldham got a goal back in the 72nd minute but Northampton held on and won 2-1.

Oldham manager Frankie Bunn said afterwards: “They banked in and it does become difficult … we’ve loaded the front areas, we’ve got full-backs playing like wingers, we’ve tried to move the ball quick and we just couldn’t find the gaps. We sneaked the goal and I thought we were going to get another one but we just ran out of time.”

Others would have used an old cliche: it is harder to play against ten than 11. Most of the time, though, it isn’t. What happened at Sixfields was unusual.

Let me illustrate the change in another way. Going through a whole match with ten players would be like kicking off with 11 and giving your opponents a goal start. One would tend to have a similar effect to the other.

Afterwards the balance of play shifted significantly. But the total number of goals scored did not go up by much. Teams who still had 11 players scored more goals than they might have done otherwise, but teams who now had ten scored fewer. The increase for one was more or less cancelled out by the decrease for the other.

Sometimes, as I mentioned earlier, a referee shows a red card and awards a penalty or a free kick on the edge of the area. A goal scored in those circumstances probably would have been scored against 11 defenders as well. So I ignored the first minute after a red card. (I tested longer periods up to five minutes and they made no difference to the size of the effect I observed).

It takes two teams to tangle

There is another old cliche: referees like to even things up.

I examined Premier League games in the last 21 seasons with two red cards, and only two. I put aside those where both players were sent off for the same incident.

After the first red card one team had ten players and the other 11. So there were fewer players on the first team than on the second who could have received the second red card. I took that into account.

One Premier League game in seven finishes with fewer than 22 players on the pitch. Say one every Saturday.

In other competitions and other countries the rate varies. Nearly everywhere, though, red cards are a fairly regular occurrence.

As we have seen, a sending off can have a big impact on the balance of play. But it does not raise significantly the number of goals scored in the rest of the match.

Nor does it raise significantly the number of yellow cards shown in the rest of the match. The ratio of yellows to players goes up a bit but there are fewer players on the pitch and the total for yellows is about the same.

A red card does not signal a general breakdown in discipline.

I looked at yellow cards in Premier League games during the last 12 seasons, 2006-07 to 2017-18. I ignored yellow cards shown for the same incident as a red card.