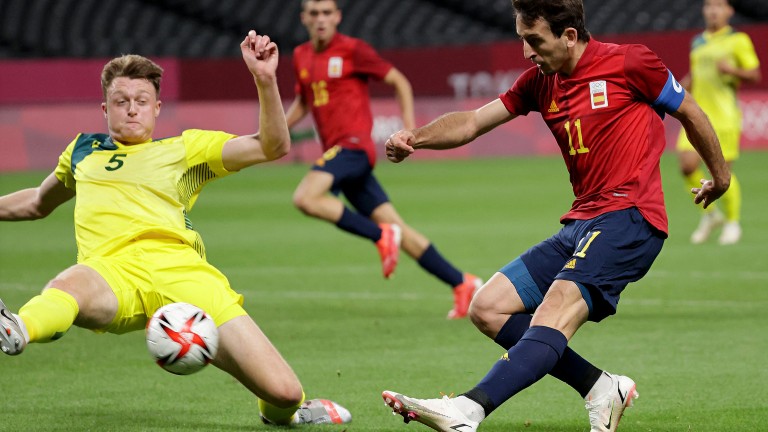 Spain survived a real scare as they overcame Ivory Coast to seal their semi-final spot at the Olympic Games and another tough test lies in wait against tournament hosts Japan.

Although a 5-2 extra-time triumph over the Ivorians may suggest there was clear daylight between the sides, La Roja required an injury-time equaliser from substitute Rafa Mir to keep their gold-medal hopes alive.

Manager Luis de la Fuente would have been delighted with their extra-time display but, much like their Euro 2020 campaign, their matches have been a tale of lots of possession and spurned opportunities.

Spain bowed out in the semi-finals of Euro 2020 and six of the 22 players in De La Fuente's squad in Tokyo were also part of Luis Enrique's roster.

But for all the quality in this possession-based side, Spain are lacking a natural goalscorer who could take them to the next level.

That was evident at Euro 2020 as they were locked level in five of their six matches after 90 minutes, and a similar trend has taken place in Tokyo.

La Roja drew two of their three group games against Egypt and Argentina while they required an 81st-minute winner from Oyarzabal to record a narrow 1-0 success over Australia.

Given Spain's wasteful nature, another stalemate in normal time against plucky hosts Japan, who have conceded just once during four matches, is where the value lies.

Hajime Moriyasu's men came through a tough section with a perfect record thanks to wins against South Africa, France and semi-finalists Mexico. They then kept their nerve to see off New Zealand in a penalty shootout after a goalless draw in the last eight.

Japan may lack the individual talent of their star-studded opponents, but they make up for it in grit and determination and some of their players ply their trade in elite European leagues.

The other semi-final sees Brazil, who are aiming for back-to-back Olympic titles after claiming gold in Rio five years ago, tackle Mexico.

With Hertha Berlin's Matheus Cunha, Everton star Richarlison and highly-touted Ajax youngster Antony spearheading their attack, it would be disappointing if the Brazilians failed to progress in 90 minutes.