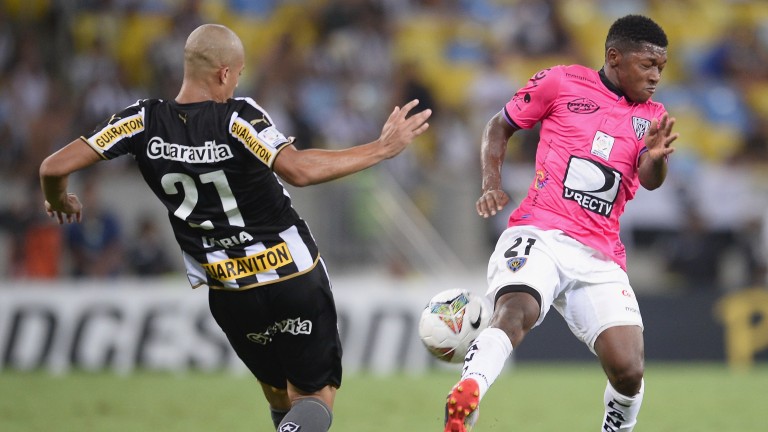 Jonathan Gonzalez (right) made the move to Olimpia from Independiente
Getting
1 of 1
By Steve Davies 7:38PM, FEB 8 2017

Pablo Repetto, the man who guided Independiente del Valle to the final of the Copa Libertadores last year, can mastermind an early exit for his former club tonight.

Uruguayan coach Repetto swapped Ecuador for Paraguay in December and, quirkily, the draw pitched his new team, Olimpia, up against his former employers in this, the second qualifying round.

Repetto’s return to the Quito suburbs last week was an unhappy one with Independiente carving out a narrow 1-0 win to take into the second leg.

But very few visiting teams flourish at altitude and the fact is that Independiente are far weaker than last year and Olimpia should be able to see them off with a bit in hand back in Asuncion.

The reason why Independiente are weaker is in no small way down to the excellent Repetto, who not only removed himself from the scene of his greatest triumph, but took keeper Librado Azcona and midfielder Jonathan Gonzalez with him.

The Ecuadorean club also saw their joint-top scorers in the 2016 Copa, Jose Angulo and Junior Sornoza, leave in the off-season, so perhaps it was no surprise that they only pipped Peruvian lightweights Deportivo Municipal in the first qualifying round 3-2 on aggregate.

Olimpia are formidable at the Estadio Manuel Ferreira and victory in their opening league game of the season on Monday – they won 3-0 at Sportivo Trinidense – will have removed any of the rust that was evident in Quito last week.