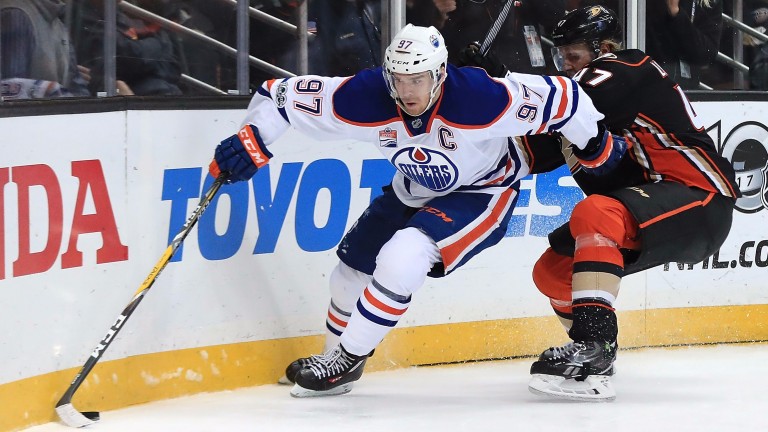 Edmonton's Connor McDavid was the most potent forward in the NHL last season
Sean M. Haffey
1 of 1
By Adam Scriven UPDATED 1:26PM, OCT 7 2017

Last season Pittsburgh became the first team to retain the Stanley Cup since the introduction of the NHL salary cap in 2005 and the Penguins are favourites in most books to make it a threepeat.

There's a lot of hockey to be played before it comes to that, though, and for betting purposes it may be best to concentrate on the regular season markets.

Edmonton were the whipping boys of the NHL not long ago, but a change of management and an influx of prodigious young talent have transformed the Oilers and they are challenging Pittsburgh for Stanley Cup favouritism.

General manager Peter Chiarelli has handed out some generous contracts which could leave them in trouble with the salary cap a couple of years down the line, and he seems to have gambled the Oilers' future on delivering the Cup in the next couple of seasons.

Edmonton finished second to Anaheim in the Pacific Division standings last year and should continue to progress.

The Ducks have won this division five years on the spin, although they are likely to be without key forward Ryan Kesler until Christmas. Their core players aren't getting younger and it may be time for a changing of the guard.

Superstar goaltender Carey Price played a big part in Montreal winning the Atlantic Division last term, but even his brilliance might not be enough to rescue a team otherwise sorely lacking in star quality and depth.

When Price went down injured two seasons ago the Canadiens went into freefall and having lost fiery forward Alexander Radulov and solid defenceman Andrei Markov in the offseason, the squad look light.

While Montreal will be praying their few elite players stay healthy, their arch-rivals Boston look well prepared in case of injuries.

The Bruins have farmed high draft picks in recent seasons and those promising youngsters look ready to break through into the big leagues judging from preseason performances.

Boston scraped into the playoffs last season with 95 points having just missed out in the two previous campaigns with tallies of 93 and 96 points. Ladbrokes' mark of 91.5 points looks easily attainable.

The team improved significantly after a change of head coach last February, and they will be hopeful of a smoother run to the postseason this time.