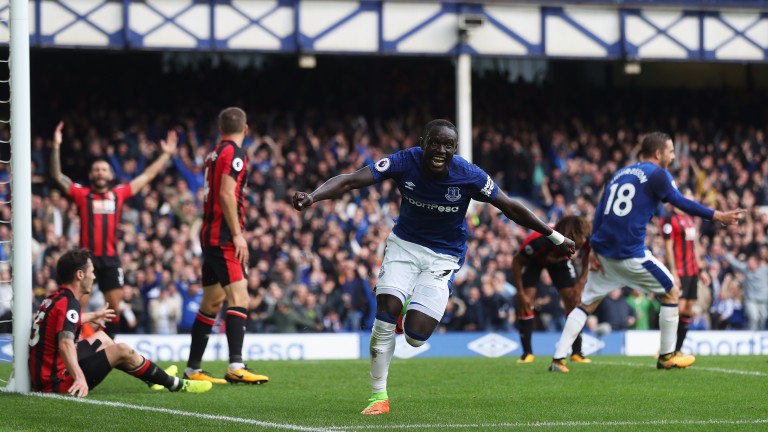 Everton's Oumar Niasse gets the winner against Bournemouth
Mark Robinson
1 of 1
By Graham Woods 7:48PM, SEP 23 2017

They remain level on points with Manchester United but boosted their goal difference over their rivals, who edged Southampton 1-0 at St Mary’s.

It was another good day for punters after a Wednesday League Cup coupon when all five Premier League favourites obliged. As well as City and United, there were wins for 8-13 Tottenham at West Ham and 4-6 Chelsea at Stoke.

Merseyside pair Everton and Liverpool may have been left off a few punters’ shortlists after their recent struggles but the Toffees came up with the goods, beating Bournemouth 2-1 at home at odds of 7-10, while the Reds won 3-2 at Leicester.

Everton’s win helped ease some of the pressure on manager Ronald Koeman but West Ham boss Slaven Bilic is evens to be the next manager to leave his post.

Frank de Boer had already become the first manager to go this season but his successor at Crystal Palace has fared no better, and the Eagles’ defeat at the Etihad means they have now gone six games without a point or even a goal.

The run of fixtures doesn’t get any easier with a trip to Old Trafford next followed by a visit from champions Chelsea. Newcastle away and West Ham at home after that are more winnable and Hills go 20-1 that Palace fail to take a point from those games.