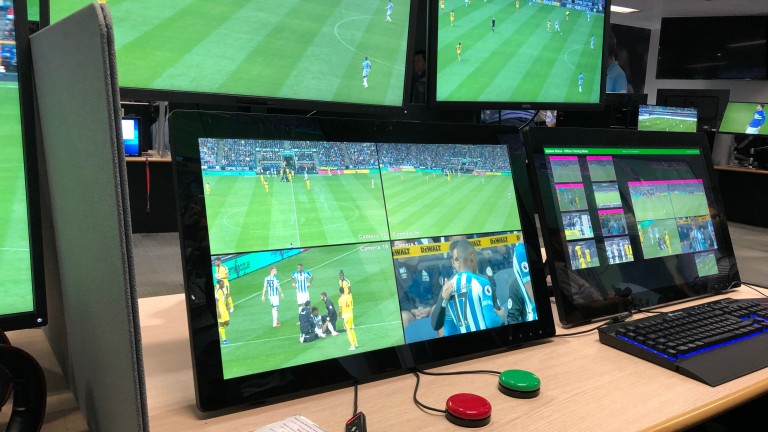 The intention, having made my thoughts perfectly clear, was to sit back and watch the reality of VAR prove every bit as horrific as expected, so I could then win the ‘I told you so’ world championship as the authorities realised they had made the biggest error in the history of football and scrapped it.

But despite the opening weekend of Premier League football in the VAR era having produced two shockingly shambolic incidents there is still a widespread belief that video refereeing has a future.

The decision to rule Raheem Sterling offside and then the outrageous disallowing of a Wolves goal should have led to rioting on the streets but, while plenty of people have started to realise VAR is a significant backward step, there is a dismal lack of evidence that revolution is in the air.

And so those who can see how harmful this is going to be – and when I say harmful I mean utterly ruinous – are obliged to do the right thing and make our voices heard.

This is in order to counteract voices such as Robbie Savage’s. He’s a person I genuinely admire for squeezing such a long and lucrative playing career out of such a relatively limited amount of ability and then for creating a prolific media career out of even less talent.

But it is hard to think of anything with which I could disagree more vehemently than his verdict on the opening weekend, in which he concluded: “For me VAR is working so well.”

He points to the right decision having been reached at all times, which may be true strictly speaking but which does not tell the whole story of how the new way of officiating football matches is already causing such appalling damage.

First, let’s look at the Sterling offside, a decision that was reached after an embarrassingly long stoppage, the fruits of which were a still image that suggested a part of the City star’s shoulder might have been offside by around three millimetres.

The lunacy of spending so long reaching such a conclusion is mind-boggling. What the hell is going on? I honestly felt gutted when I saw the incident unfold because it felt like something I have loved all my life was being ripped to pieces in front of my eyes.

You simply cannot stop a game and spend so long trying to find such an absurd reason to disallow a goal. It is mad. Let’s go back to why the offside law was introduced in the first place.

It was created to prevent teams goal-hanging. If there was no such thing as offside it is likely teams would have taken to employing a posse of giants to stand in the six-yard box and try to convert crosses supplied by specially recruited experts.

Something had to be done to avoid that but offside is actually an excessive deterrent to that possibility in that it enables defenders to avoid having to physically stop attacks by closing down the ball and instead letting them just push to the halfway line to trigger a flag.

In other words, the law acts to detract from attacking football and for many years when I was first watching the game that’s exactly that happened, with linesmen flagging far too frequently.

But then there was a brilliant directive to give the benefit of doubt to the attackers, and that worked superbly right up until last weekend, when VAR tried to solve a problem that did not exist, namely the need to determine whether, even if part of an attacker’s body was onside, another part was marginally off.

The handball that robbed Wolves of a goal at Leicester the following day was even more depressing. Nobody in the stadium had the remotest clue an offence had taken place.

It was a standard sort of goal from a corner. The ball pinged around a bit in the box and then fell to a Wolves player who slammed it into the net.

But behind the scenes, as Wolves fans went wild, footage was being reviewed and it was noticed the ball has momentarily brushed the top of a Wolves player’s arm, so handball was given, even though it could not have been less intentional.

For all that I detest VAR, I maintain that there is basically no right or wrong answer in terms of whether it is a good thing for football.

If you are the type of person who wants everything just so, who keeps their CDs in alphabetical order, saves everyone in their phone contacts by their first name then surname rather than as ‘Mum’ or ‘Soft Mick’, and fastidiously ensures food labels face the front of the kitchen cupboard, it is great.

The idea that a throw-in on the halfway line should be wrongly awarded strikes these folk as horrifically unjust. They want everything in the world to be as perfect as possible and if that means taking as long as it takes to get decisions on a football pitch right then so be it.

But if you are the type of person who, while keen to ensure real crimes are solved in a rightful manner, preferred football as it was, with the vast majority of decisions being correct and the game flowing in the wonderful way it does (or rather did), you are going to be phenomenally unimpressed by all these extra stoppages.

The problem is bringing in VAR is not going to attract any new fans, who are suddenly prepared to embrace the game because it is being officiated with one or two per cent greater accuracy.

It will, however, drive away plenty of existing football lovers for whom its fundamental majesty has suddenly become grotesquely distorted.

Stan Collymore, an excellent pundit, is also a fan of VAR and in a Twitter exchange we had in the wake of the Sterling incident I expressed the view that football was a more enjoyable escape from real life when you could celebrate a goal properly rather than having to glance across to the referee to see if he appeared to be chatting to the video referee.

It was a well expressed point, one with which many will agree. But Collymore was describing football foreplay. And without the orgasm of the unrestrained goal celebration it really isn’t the same thing.

VAR is, to borrow Danny Baker’s brilliant description, like a parent at a party.

“You aren’t allowed to smoke in the house. We said you had to go outside to smoke.”

“No you’re not. You’re a millimetre over the threshold. Get out.”

And if the scenes from last weekend are repeated on a regular basis, which is likely, the party will soon be over as far as football’s popularity is concerned.

The sport has become so massive that we no longer believe anything can stop its growth, but nothing has a divine right to keep getting more and more loved (except, it would seem, Mrs Brown’s Boys), and if VAR is not thrown into a skip as quickly as possible the long-term consequences are likely to be dire.

My views on the mares’ chase that will be introduced at the 2021 Cheltenham Festival are broadly – and far more expertly – expressed by Richard Forristal in the Racing Post, but a key question remains unanswered in the wake of the announcement of the new race.

Why does one of the existing 28 races have to be axed to accommodate it? The festival currently comprises four seven-race cards, but it is common for meetings to feature eight races and it is difficult to see why Cheltenham can’t simply stage an extra contest on one of the days.

Apparently there are concerns that the turf would suffer as a consequence, but in 2008, after the Wednesday meeting was lost due to high winds, they staged ten races the following day and nine on Friday and the terrain seemed to hold up without problems.

In terms of which race will get the chop, Cheltenham chief Ian Renton says there are four or five under consideration, although presumably neither of the existing mares’ contests are among them given that it would be perverse to introduce a new mares’ event to boost the general situation for female jumpers only to remove an existing one.

I suspect Renton and his fellow bigwigs will assess the impact of the changes made to the National Hunt Chase with a view to dumping that if the 2020 running is anything like as controversial as this year’s was.

Otherwise, if a race really has to go my heart would not break if the Boodles (Fred Winter) was the chosen one. It has yet to generate a winner who went on to anything noteworthy and has impacted on the size of the Triumph field.

The insistence on one in, one out is interesting because it suggests, contrary to popular belief, that Cheltenham is not particularly crazy about creating a fifth day of the festival, something they could easily have done by adding the mares’ chase and a veterans’ contest over fences and making five six-race cards.

I would have no problem with such a move. The Ryanair Chase could easily act as a bill-topper on a fifth day and it would be good for racing fans who cannot afford to take a day off in the week to have the chance to sample the magic of the festival.

It is hard to think of a more gutless, incompetent piece of sports administration than the refusal of PGA Tour officials to start issuing stroke penalties to slow players.

By chickening out of doing so they are solely to blame for the row that erupted between players last week in the wake of Bryson DeChambeau’s outrageously long preparation for a putt he eventually sent well wide of the hole.

If players know their score will be harmed if they take more than the stipulated 40 seconds to hit their shot the problem will be eradicated immediately. It is extraordinarily stupid to keep letting the snails get away with it.