Not much to separate the Giants and Cowboys 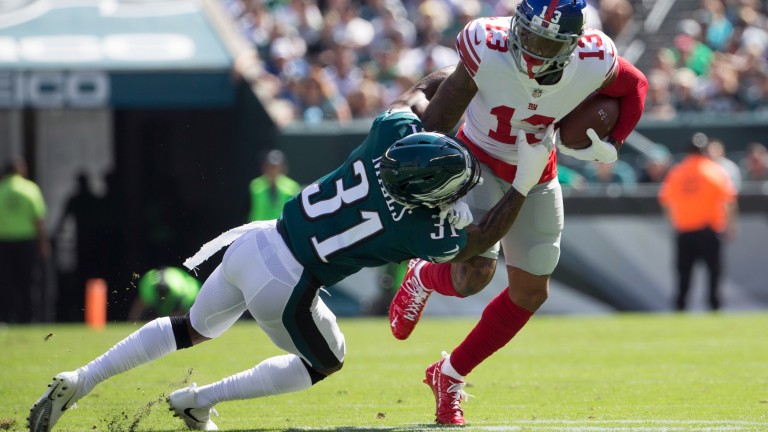 Dallas Cowboys against New York Giants looks like a showpiece showdown for Sunday night but neither of the NFC East sides are as strong as they have been in recent seasons.

The Giants are showing signs of being on the way back up after their tough 3-13 campaign last season, but Dallas had a winning 9-7 record in 2017 that they will struggle to emulate this time.

The Cowboys opened up with a sorry 16-8 defeat to Carolina that could have been even worse as they trailed 16-0 at one point.

Dumping veteran receiver Dez Bryant and the retirement of veteran tight end Jason Witten has left even more responsibility on the shoulders of running back Ezekiel Elliott, with the added handicap that their once fearsome offensive line is not the force it was.

Quarterback Dak Prescott, a rookie sensation in 2016, is coming under fire in his third year but he doesn't have much to work with. Cole Beasley, who might be a third-choice receiver with many other teams, has wound up as his top target for this year.

Things can only get better for the Giants, whose disastrous 2017 campaign - just a year after they went 11-5 - did at least allow them to draft running back sensation Saquon Barkley, who could put on a show in Texas.

Barkley was largely bottled up by the impressive Jaguars defence on his debut but broke off one 68-yard run for a touchdown and should be seen to better effect against the Cowboys.

While choosing Barkley may provide short-term gains, the Giants could face longer-term regret if quarterback Sam Darnold, chosen by their neighbours the Jets with the next pick, turns into an NFL superstar.

For now, they are relying on the final seasons of Eli Manning's career. Manning missed out on a couple of long connections to the superb Odell Beckham last week, but they should find their stride and the good news was that the wide receiver showed no sign of rust after last season's broken ankle.

The Giants should at least be competitive in this contest and are worth supporting with a handicap start.