Not even VAR could spoil a wonderful World Cup 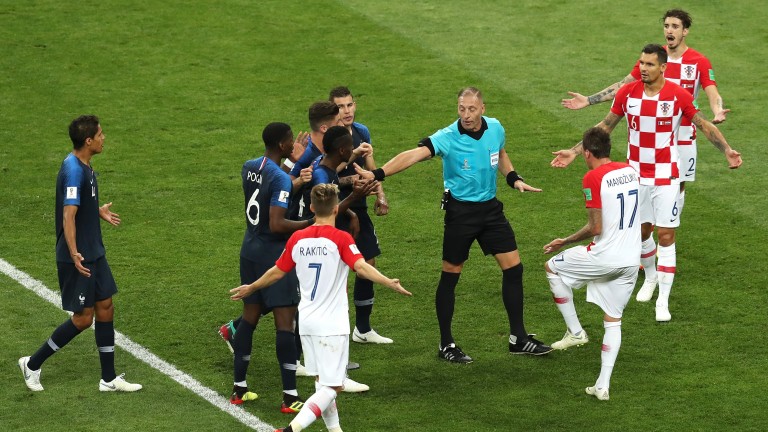 The VAR penalty decision in the World Cup final sparked just as much debate off the pitch as on it
Catherine Ivill
1 of 1
UPDATED 1:26PM, JUL 25 2018

What a tournament. What a month. It was such a surprisingly wonderful World Cup that, even though you are almost certainly sick to death of reflective pieces, I can’t think of anything else to do this week other than reflect on the tournament.

At least, having read a zillion other such articles, I’m coming up with an original number of topics. Here then are my seven takeouts.

Some loved it, others remain unsure about it and then there are those like me who cannot have it at any price.

It had a similar tournament to Harry Kane in a funny old way. One of the most prominent elements of the World Cup in the early stages, it then went quiet. But, unlike Kane, who was unable to pop up and have an influence in the final, the VAR did indeed make an appearance in the last game and organisers are lucky it was not more controversial.

Had the penalty that was awarded to France after review been the winning goal all hell would have broken loose and rightly so because there was never a shred of clear and obvious video evidence to reverse the original decision that no intentional handball had taken place.

I am happy to accept I got it horribly wrong by predicting the VAR would ruin the World Cup, but the magnificence of the tournament was despite rather than thanks to the VAR.

It has had a beneficial effect in terms of minimising grappling at set pieces, but there was still too much diving that did not get properly punished via the VAR and the stoppages were ludicrous and annoying, culminating in the 4min 21sec it took to decide Ivan Perisic had deliberately handled the ball.

Worst of all it led to decisions being made that were no less contentious than good old naked eye ones, exhibit A being the laughable penalty that was awarded to Iran against Portugal. I have literally never seen anything as absurd on a football pitch

It is brilliant that there will be no VAR used in the Premier League next season but that joy is tempered by the realisation that every time there is a questionable decision advocates of video refereeing will be screaming the place down for it to be introduced, which promises to get extremely boring.

At least those of us who heeded Pierluigi Collina’s warning that linesmen would not flag unless they were certain it was offside managed to get a few quid out of it. Sporting Index pitched total offsides at 270 at the outset and there were just 167.

It seemed clear the arbiters were under instruction to limit the amount of players they cautioned, although whether the rumour that the edict was issued to prevent star names being suspended in the latter stages is true we will never know.

The upshot was, however, that some fairly brutal tackles were not properly punished and far too many potentially thrilling breakaways and counter-attacks were cynically halted by professional fouls in the middle third yet the culprits were rarely booked, which was ridiculous.

Comparing Bobby Robson's side to England's heroes in Russia

Swell of England optimism likely to end in predictable heartache

Congratulations are in order to the BBC and ITV for their marvellous coverage. It was slick, comprehensive, insightful and both stations found the perfect balance between giving the World Cup the sense of occasion it merited and not being too earnestly intense.

The breaking of the white, male monopoly of presenters and pundits improved the output rather than merely ticked boxes and it was actually quite emotional to watch the wonderful closing sequences that both the Beeb and ITV crafted so beautifully.

It wasn’t perfect, of course. Some pundits have had their day, and neither channel played its best commentary pairing for the final (do they ever survey viewers to see who they prefer?), but all in all armchair viewers were given an outstanding viewing experience.

Yes, I know I’m always harping on about this but until something gets done about it I shall continue to do so.

Neither Uefa nor Fifa stands for any semblance of confusion between opposing sides’ kits and watching matches is all the better for it.

Excited though I am for the resumption of the Premier League, I know too that it will not be long before we see a team in white playing a team in the palest blue imaginable and numerous other examples of ridiculous tolerance towards strip similarities that should be clamped down upon but aren’t. If a team has a silly new third kit to flog to its fans they will damn well make their players wear it regardless of how alike it is to the opposition’s colours. This has to stop.

One aspect of the media coverage of the tournament that really got on my wick was the outrageous temerity of some English football writers who criticised fan-generated player ratings.

This centred on the low marks out of ten BBC viewers gave to Raheem Sterling, something that certain snobby journos decided was worthy of condescending comment.

They tried to educate the unsophisticated viewers that Sterling had in fact played well and that while most of his attempts on goal had gone nearer the corner flags than the posts, his movement and workrate enabled others to thrive.

Three points here: first, if significant numbers of fans didn’t think Sterling played well, he didn’t play well. Football is played for the enjoyment of the crowds, not the pseudo-intelligent press box dwellers.

Second, Sterling had a terrible World Cup and should have been on the bench for much of the time he was toiling fruitlessly on the pitch.

Third, who the hell are football writers to criticise anyone for generating poor ratings? We have all read ratings for the team we support and wondered whether the people creating them actually watched the game. They are invariably done with little care or are downright embarrassing.

Now the euphoria has abated I think we are all able to see that Gareth Southgate’s class of 2018 are actually not much different from most other Three Lions squads of the modern era.

They reached the semi-finals through a bit of good luck that eluded their predecessors, a sharp range of set-play drills and a vastly improved spirit and sense of confidence, for which Southgate deserves all the praise that is coming his way.

But they created little in open play and were simply found out for an overall lack of quality in the end. It was great to see a fairly limited squad achieve so much though.

I am trying to solve a little mystery at the moment. Sporting Index are currently offering 2018-19 total points quotes for three Prem teams - Arsenal, West Ham and Wolves. Why those three? It is intriguing me far more than it should.

Anyway, hopefully they will put up a quote for Spurs soon, and it will be fascinating to see what that number is.

Tottenham already have a tricky start in that three of their first four league games will be away and the other will be at Wembley because the redevelopment of White Hart Lane is slightly behind schedule.

But a bigger concern for Mauricio Pochettino, their superb manager, is what sort of team he will play for those games, with so many of his preferred starters only just beginning to unwind after their lengthy and arduous stints in Russia.

No fewer than nine Spurs players represented countries that were involved right through to the last weekend of the tournament and while you would think Hugo Lloris should be okay to hit the ground running given keepers travel so much less distance, the likes of Trippier, Alderweireld, Vertonghen, Dier, Alli and Kane all had a demanding schedule this summer and cannot be expected to be remotely ready to go again when Tottenham’s new campaign kicks off in Newcastle 23 days hence.

I thought Kane and Alli were particularly inert towards the end of England’s exertions and it will be a big test for Pochettino to get his team off to a decent start.

Clearly Sporting Index will be well aware of that when they issue their points spread but it is unlikely to be set at a level which makes a buy remotely appealing.

Give us all a break and end marathons

Something has to give when you are a sports fan and the World Cup is dominating your attention, and this year that something was Wimbledon, which I barely noticed was taking place.

But then it became apparent that something extraordinary had taken place last Friday when reports came through of a men’s semi-final that lasted more than six-and-a-half hours.

Further investigation revealed, however, that the contest in question, between Kevin Anderson and John Isner, was actually the most hideously drawn out affair since Avatar and that the concluding set, which Anderson won 26-24 was great only if you’d bought total games on the spreads.

As a spectacle it was pretty grotesque, a weary serve-a-thon that dragged on for far longer than anyone wanted, including even the players, and especially the crowd, who were denied the chance to see Djokovic v Nadal reach its conclusion.

Surely now organisers will scrap these tediously long final sets. If you can’t demonstrate your superiority over your rival in five sets there is no reason why you shouldn’t face a sudden-death tiebreak.

Actually there is a case for a wider review of the sport’s scoring system, with four games being a better target to win a set than six and games probably comprising either best-of-five or best-of-seven sets. But for now it is glaringly obvious there should be a tiebreak at the end of every set.