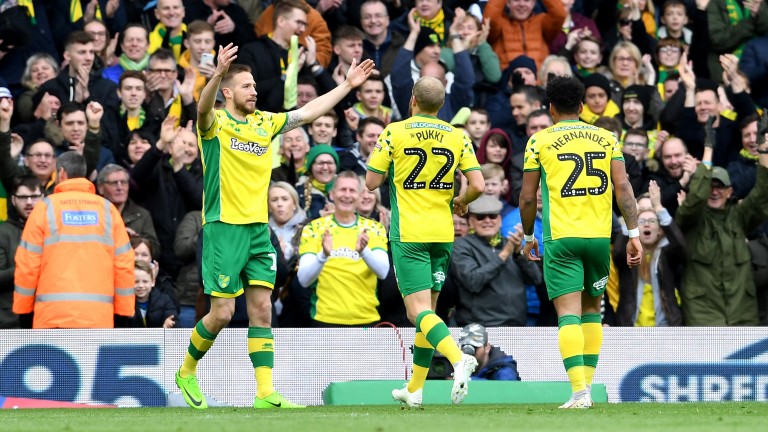 Norwich were hoping for a promotion party tonight, but Sheffield Wednesday could make it a nervous night for them at Carrow Road.

The Canaries were denied the chance to go up by winning this game when Sheffield United beat Nottingham Forest in today's early kick-off. They clearly want to claim their Premier League spot swiftly and the busy Easter period offers them an opportunity to seal the deal.

However, the short odds for a home win don't appeal greatly and mid-table Wednesday should make life tricky for the hosts.

Norwich's eight-match winning run saw them move from hopefuls to runaway leaders, although their charge has slowed in the last couple of matches which they drew 2-2 at home to Reading and 1-1 at Wigan.

Daniel Farke's men battled back for a point at Wigan and dominated against Reading but they appear to be lacking a spark.

That could be due to the continued suspension of top assist-maker Emi Buendia, who sits out the final match of his three-match ban, and with that in mind a punt on Wednesday getting a one-goal start on the Asian handicap may bring a profit.

Wednesday were totally outplayed last time out and yet they still lost only 1-0 at Leeds - the same margin of defeat in Norfolk would see Asian handicap punters have their stakes on the Owls returned.

The Elland Road loss was just the third in Wednesday's last 20 league matches as they look to lay down a marker for next season under boss Steve Bruce.

Unfortunately for Wednesday, their playoff chance has virtually slipped away and their motivation needs to be taken on trust. Adam Reach's absence through injury is also a blow for the outsiders.

But Wednesday have drawn away to Sheffield United, West Brom and Derby this season and won at Aston Villa, Bristol City and Middlesbrough, so there is no reason to suggest the Owls will collapse at Carrow Road.

Key stat
Sheffield Wednesday have lost just two of their eight matches away to top-ten teams this season.