Brighton can edge to narrow win over doomed Norwich 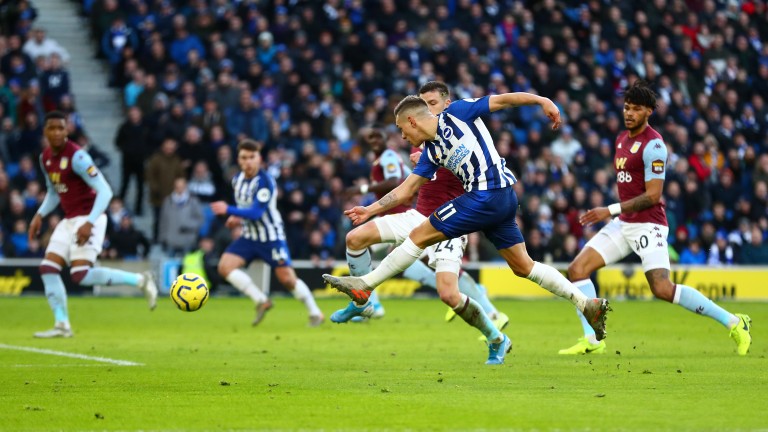 Norwich
Grant Hanley, Christoph Zimmermann and Sam Byram are out for the season. Moritz Leitner (hernia) is unlikely to feature but Timm Klose returns from suspension.

Brighton
Defender Adam Webster could return to the squad and Davy Propper should shake off a minor injury.

Brighton supporters must have been fearing the worst after a 1-0 home defeat to Crystal Palace on February 29, especially given that six of their next seven matches were against Wolves, Arsenal, Leicester, Manchester United, Liverpool and Manchester City.

However, a 2-1 win over the Gunners and goalless draws with Wolves and Leicester have boosted the Seagulls' chances of staying up and they can edge their way to a crucial win over bottom club Norwich at Carrow Road.

In-form Manchester United proved too strong for Brighton on Tuesday, winning 3-0 at the Amex, but Graham Potter's men drop down in class to face a Norwich side who have lost six of their last seven league games, failing to score in seven of their last eight.

Given that Brighton have drawn a blank in four of their last five, few TV viewers will be expecting a festival of end-to-end football despite Norwich's desperate need for a victory.

Seven points from safety, the Canaries have to aim for maximum points but that has been the case for a while.

The problem for Norwich boss Daniel Farke is a lack of quality in the final third and Brighton's solid defence has enough about them to snuff out the threat of Teemu Pukki.

The Finnish striker has scored 11 of Norwich's 21 league goals this term but he hasn't found the net in any of his last ten appearances in all competitions.

The only regular goalscoring support Pukki has received this season has come from exciting young midfielder Todd Cantwell, who has notched six league goals as well as a cracker in last weekend's FA Cup defeat to Manchester United.

But that reliance on Pukki and Cantwell makes Norwich easy to defend against and Brighton, who missed a penalty in their goalless draw at Leicester, are worth backing to claim a narrow win.

The Seagulls' away form may not encourage punters – they have won once on 15 road trips since an opening-day 3-0 romp at Watford – but Norwich's dismal 4-0 defeat at Arsenal on Tuesday showed why they are propping up the table.

The Canaries failed to register a shot on target in November's reverse fixture, when goals from Leandro Trossard and Shane Duffy gave Brighton a 2-0 victory.

Duffy and Lewis Dunk, who scored the equaliser against Arsenal, make the Seagulls a real threat from set-pieces while striker Neal Maupay has some talented creative midfielders behind him and Brighton can inflict another damaging defeat on Norwich.

Norwich have scored only one goal in their last eight Premier League matches.