Todd Cantwell could well get on the scoresheet 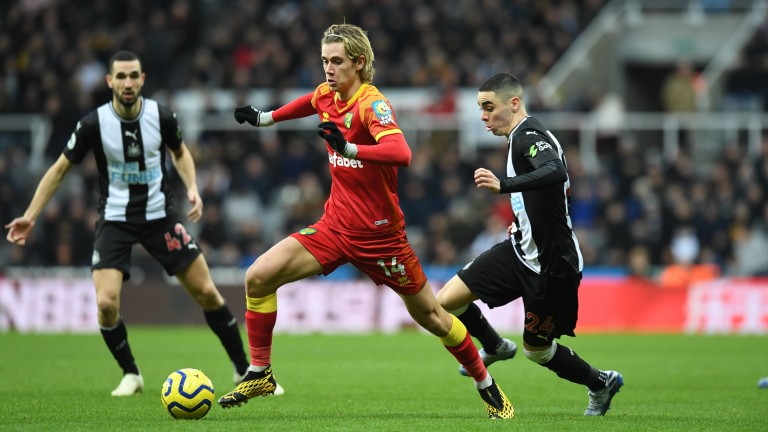 Liverpool
Sadio Mane is expected to return from a thigh injury while James Milner and Xherdan Shaqiri may have recovered from thigh and calf injuries.

The elements did their best to extend the yawning chasm between Liverpool and the Premier League chasing pack when Storm Ciara postponed Manchester City v West Ham last week and the Reds can blow away the winter-break cobwebs in a Carrow Road cracker.

If the 22-point advantage Jurgen Klopp's men have established over the Citizens is not astonishing enough, there are an eye-watering 55 points separating top and bottom as they prepare to lock horns in East Anglia.

But the 3-10 on offer for a Liverpool win - a fair bit bigger than the 1-8 available for Man City to beat basement side Huddersfield at this stage last season - shows bookmakers have some respect for Daniel Farke's men.

The Canaries have netted in all of their home league encounters against last season's top six, seeing off Liverpool's closest competitors - and that term should be used lightly - Manchester City 3-2 in September.

That was one of only four league wins they have chalked up all season but while an inability to hold on to leads is costing them points, they have no issues finding the net in front of their own fans.

Norwich have scored in 11 of their 12 league games at Carrow Road, with Watford the only Premier League club to keep a clean sheet in Norfolk. Even on that occasion Norwich dominated with 17 shots and 66 per cent possession.

Liverpool's defence went on a superb run of keeping seven successive clean sheets in all competitions between December 21 and January 19 but they are far from impenetrable on the road.

They have accumulated the most away clean sheets in the league this season but have still shipped in six league games at Southampton, Chelsea, Manchester United, Aston Villa, Crystal Palace and Wolves.

Norwich are arguably at their strongest down the flanks with Emiliano Buendia and Todd Cantwell attracting the attention of big clubs.

Mohamed Salah looks the best bet to break the deadlock - he drew first blood when the sides met on the opening night of the season - but there could be value elsewhere in the anytime scorer market.

Only Teemu Pukki (66) has managed more shots than Cantwell (36) in the Norwich side this term and the winger could add to his tally of six league strikes against a Liverpool team who operate with flying wing-backs.

While Norwich can be competitive, it would rank among the greatest shocks in Premier League history if they were to bring an end to the unbeaten run of a fully-fit Liverpool. Still, maybe Storm Dennis will intervene.

Norwich City have kept only one clean sheet at Carrow Road in this season's Premier League.