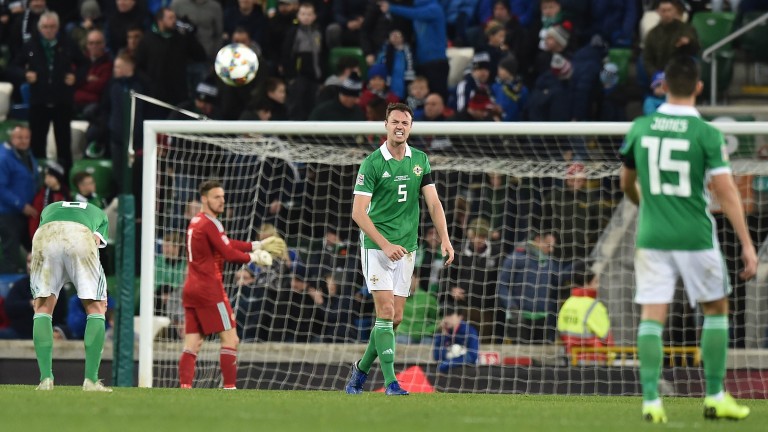 Jonny Evans of Northern Ireland screams in anguish after his side conceded a late against Austria
Charles McQuillan
1 of 1
By Steve Davies UPDATED 5:07PM, NOV 15 2019

Northern Ireland
Jordan Jones is still out with a knee injury.

Holland
Steven Bergwijn and Donyell Malan, who led the Dutch line in Belarus last month, are injured. Memphis Depay is a doubt.

Ronald Koeman branded Northern Ireland “terrible to watch” during last month’s Euro 2020 qualifier in Rotterdam but what the Dutch boss failed to mention was the visitors were also desperately unlucky to lose 3-1.

Northern Ireland put in a rock-solid, uncompromising, charmless defensive effort to stifle the free-flowing Dutch, a plan that was working spectacularly well until injury-time, when Holland scored twice to seal a 3-1 win.

It was a heartbreaking conclusion which saw them knocked out of the automatic qualifying spots in Group C and to compound Northern Irish misery, popular boss Michael O’Neill is about to wave farewell having taken over at Sky Bet Championship side Stoke.

This is O’Neill’s home sign-off and it would be fitting if his team can produce the kind of gutsy, hard-working effort which has been the hallmark of his eight years at the helm.

Even with home advantage they are hard to back at 7-1 because they are limited going forward.

But having disturbed the Dutch once before they can easily do so again.

O’Neill’s banks of four and five are marshalled by top-class pros such as Jonny Evans and Steven Davis and there is no reason to believe they will be blown away by a Dutch team who would ultimately be content with a point.

There have been 15 goals in Northern Ireland's seven qualifiers, only one of which has been scored inside the first 30 minutes. Take the 11-10 that the deadlock isn’t broken until after the 28th minute.

Holland are likely to have almost all of the ball – Northern Ireland boasted just 24 per cent possession in Rotterdam – but they will need to be less wasteful than they were in that game and that won’t be easy against a resolute rearguard.

Northern Ireland’s six qualifiers have produced three first-half goals, the lowest tally of all 55 nations in the tournament.