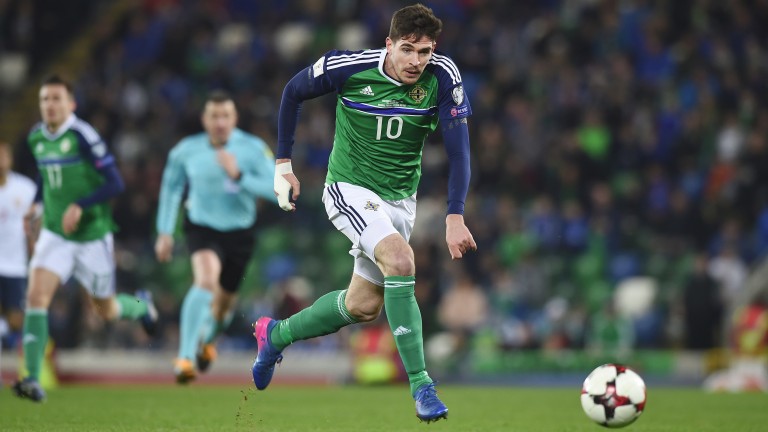 Northern Ireland ended a sequence of four successive competitive losses by defeating Estonia 2-0 on Thursday but they may have to settle for a damaging draw at home to Belarus.

Failing to win would be a major blow to their hopes of reaching the Euro 2020 finals as Michael O'Neill's side were done no favours by the draw, which pitched them in with Germany (by far the strongest of the pot-two teams) and Nations League semi-finalists Holland.

Getting between that pair is going to be incredibly difficult and Northern Ireland need to harvest maximum points from their games against Estonia and Belarus to give themselves a realistic chance.

They made a fine start on Thursday, overcoming a stubborn, defensive-minded Estonia side who were intent on playing for a stalemate.

But Belarus are a higher-quality side and they are already guaranteed a berth in the Euro 2020 qualification playoffs after finishing top of Nations League D Group 2.

To avoid having to go through the playoffs, Belarus would need to make a major splash in Group C but they got off to a miserable start by losing 4-0 to Holland in Rotterdam on Thursday.

However, the contest was not entirely one-sided - the shot count was ten to eight in Holland's favour - and Belarus head coach Igor Kriushenko will be hopeful of a better result in Belfast.

He may look to tinker with his selection and could hand a start to striker Anton Saroka, who came off the bench on Thursday and unleashed a fierce drive which forced a decent save from Dutch keeper Jasper Cillessen.

Saroka has a respectable record at international level, scoring seven in 15 appearances, and should be well supported by offensive midfielder Stanislav Drahun, who bagged four goals during the Nations League campaign.

Northern Ireland will have to be alert to Belarus's threats and may find it more difficult to camp in the opposing half as they did for long periods against Estonia.

A different performance will be needed from O'Neill's side, who will have show a little more patience and demonstrate a clinical edge in front of goal.

It is far from an insurmountable task, but Northern Ireland's status as odds-on favourites looks questionable and there may be value in siding with the draw.

Belarus
Striker Anton Saroka looked lively after coming off the bench against Holland and could get the nod over Mikalay Signevich.

Key stat
Belarus have lost only one of their last seven competitive games.