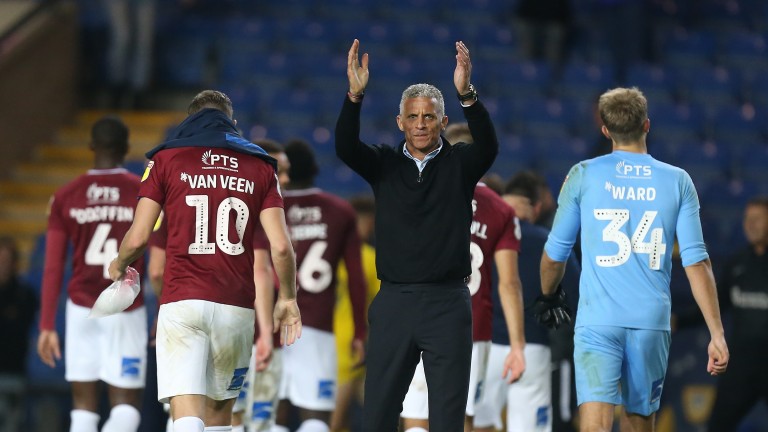 Northampton have looked a different team since bringing in Keith Curle as their manager last month and they can make it four Sky Bet League Two wins in succession by beating fifth-placed Exeter at St James Park.

Curle took over a Cobblers side teetering just two points above the drop zone after winning only one of their first ten league games.

But fears of a second successive relegation have been replaced by hope of a promotion push after four wins, two draws and one  league defeat (1-0 away to highflying MK Dons) under the new regime.

Curle quickly got the players on his side and has worked wonders with attacking midfielder John Joe-O'Toole and mercurial striker Kevin Van Veen, who were underperforming earlier in the campaign.

O'Toole has started every league game for Curle, scoring twice, and Van Veen's confidence is on the rise after two goals in his last three games.

Both have the talent to be major players in League Two and are potential match-winners against injury-hit Exeter, who are struggling to maintain the high standards they set earlier in the campaign.

Only Pym has a chance of facing Northampton and Exeter's problems are increased by the loss of regular left-back Dean Moxey, who serves a one-game ban after being sent off in their 2-0 loss at Tranmere.

Exeter confirmed first place in their EFL Trophy section by winning 2-0 at home to Bristol Rovers on Tuesday but they had previously suffered three successive defeats and may struggle to cope with Curle's Cobblers.

Grimsby are in danger of being dragged into a relegation scrap for a second successive season but they can give themselves a bit of breathing space by beating Crawley at Blundell Park.

The Mariners' last three league games have been on the road and they have lost the lot, going down 2-0 at Crewe, 1-0 at Cambridge and 2-1 at Mansfield, despite competing well on each occasion.

However, they have collected seven points from their last three home games and came from behind to register a 3-1 success over MK Dons in last Saturday's FA Cup first-round tie.

Their performance against the Dons was as good as anything they have produced this season and should give them a boost of confidence as they seek to increase the four-point gap to the drop zone.

On-loan Sunderland winger Elliot Embleton, who scored their first goal last week, is away with the England Under-20s but Grimsby manager Michael Jolley should not have to make any other enforced changes and has decent attacking options with Martyn Woolford and JJ Hooper pushing to get back into the team.

Another steady Grimsby performance may be sufficient to see off Crawley, who have lost six of their eight away league games this season.

The Reds have shipped 11 goals on their last three League Two road trips and will be without suspended defender Romain Vincelot and winger Luke Gambin, who is on international duty with Malta.

Bury are starting to get the results their attacking play has warranted and can make it four wins in a row by beating League Two promotion rivals Stevenage at Gigg Lane.

The Shakers boast one of the strongest attacks in the division and are high on confidence after last Saturday's 5-0 victory at home to Dover in the FA Cup.

Free-agent signing Nicky Maynard has given them an extra cutting edge, scoring six goals in eight league games, and Danny Mayor is one of the best wingers in the division.

Defensively they still have room for improvement but Stevenage's threat may be reduced with on-loan Birmingham winger Steve Seddon expected to miss out with a neck injury.

Seddon suffered the blow as Stevenage crashed out of the FA Cup with a 1-0 loss at Plymouth. It was the Hertfordshire side's fourth loss in five road trips and further disappointment is in store this week.