Euro debutants could cause a surprise or two 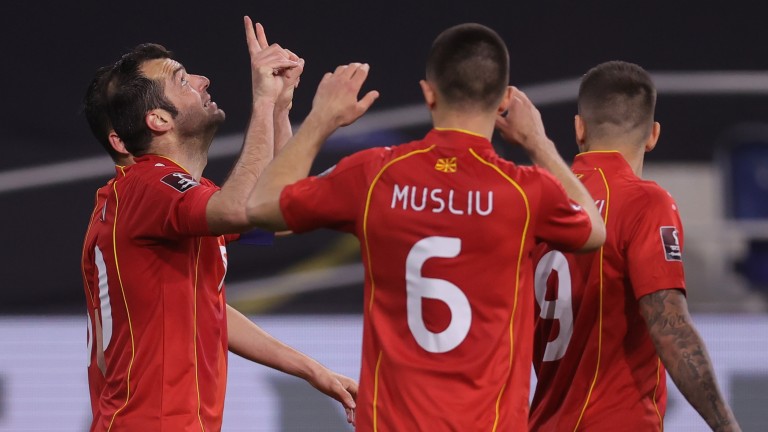 North Macedonia veteran Goran Pandev (left) will be hoping for one last hurrah
Alex Grimm
1 of 1
By Chris Rivers 9:54AM, JUN 14 2021

Just reaching the finals of Euro 2020 is a major achievement in itself for North Macedonia but they won’t be content to rest on their laurels now they are rubbing shoulders with Europe’s elite.

The rank outsiders for Euro glory bring to the party a capable if unspectacular squad, but have already demonstrated they can give the big boys a bloody nose if underestimated after winning 2-1 away in Germany in a World Cup qualifier in March.

The Red Lynxes qualified for their first major tournament via the playoffs after winning their Nations League group, seeing off Kosovo and then Georgia to punch their ticket. Suitably enough, it was the captain and national icon Goran Pandev who grabbed the iconic winner against Georgia.

In the twilight of his 21-year career, 37-year-old Pandev is finally reaping the rewards of sticking by North Macedonia through some very lean times and if the Euros is to be his swansong, he will be determined to go out on a high.

While North Macedonian football owes Pandev a huge debt of gratitude - he founded club side Akademija Pandev which nurtured several members of the international side - the Genoa forward has head coach Igor Angelovski to thank for giving him one last shot at the big time.

Angelovski has brought what was a divided squad closer together since taking charge in 2015 and that team spirit has played a big part in their run to Euro 2020. He’s also benefited from giving a chance to several of the youngsters who steered the nation to a first Under-21 European Championship in 2017, led by Napoli’s Elif Elmas, who was the top scorer in qualifying with four goals.

Angelovski’s men have acquitted themselves well when facing sides of a similar standard but with the exception of the Germany game, they have been found wanting when the quality of the opposition has been stepped up.

They finished a distant third to Poland and Austria in the qualification campaign for the Euros, going down to a 4-1 home defeat to the Austrians, who they will face again in their opening group game.

A lack of discipline has also been an issue - no side received more yellow cards than North Macedonia’s 34 in qualifying - and their campaign has the potential to get ugly if they don’t make a strong start.

Manager - Igor Angelovski: Appointed in November 2015, Angelovski is North Macedonia’s longest-serving head coach. The 44-year-old had previously managed only domestic side Rabotnicki before stepping up to international football and while he’s fostered a great atmosphere in the squad, his tactical ability has been questioned at times.

Prospects: Finishing as one of the best third-placed teams and reaching the last-16 stage is not beyond North Macedonia. To achieve that, they will probably need at least one win and should view their clashes with Ukraine and Austria as the best opportunity to get three points on the board.

Inside info - Jonathan Wilson, European football expert: The decision to allow teams in from the Nations League is a really good idea - we see so often good teams unable to qualify because their coefficient is terrible which punishes a better generation.

You can never be sure whether a new team will be inspired by qualification but I think they will lose all three games.