No stopping red-hot Ronaldo in pursuit of goals 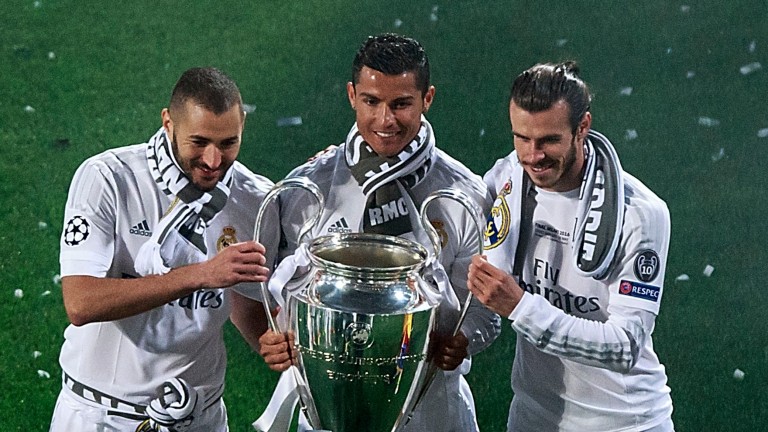 Nobody has scored more goals than Cristiano Ronaldo in any of the last four Champions League campaigns and the Real Madrid phenomenon could once again prove to be the punters’ pal in this season’s competition.

There are two ways of looking at Ronaldo’s efforts in the Champions League. You could say he is due a bad one or you could see that the Portuguese poser is an each-way good thing considering his sensation record in Europe’s elite competition.

Ronaldo’s worst Champions League effort for Real came in 2010-11 when he managed only six goals in 12 games. That was his second year in Madrid after he had notched seven times in just six appearances in 2009-10.

Since then Ronaldo’s level has risen remarkably, reaching double figures in all five years with tallies of 10-12-17-10-16.

Nobody in the history of the game can match those efforts and his total of 93 Champions League goals is ten better than nearest rival Lionel Messi.

There should be no doubt that Ronaldo is a more selfish player than Messi but the 31-year-old showed a different side this summer as he led Portugal to Euro 2016 glory with rousing speeches at various points, even after injury ended his final appearance.

Those niggles could get worse as the years go on but he made a successful first outing of the season on Saturday, scoring after six minutes against Osasuna.

Zinedine Zidane has the option of more rotation this season following Alvaro Morata’s return from Juventus but there is almost certainly no way Ronaldo will sit out the two matches against former club Sporting, while the games against probable whipping boys Legia Warsaw come early in the campaign on matchday three and four.

Borussia Dortmund will provide the toughest test but they are not overly secure defensively and should Real Madrid justify favouritism in the group it should allow the holders to get a comfortable tie in the last 16.

From there the luck of the draw can play a pivotal role but Ronaldo’s consistency makes him the man to follow, particularly as he is on spot-kick duty for Real.

Karim Benzema will have to fight for a starting berth alongside Morata and Gareth Bale tends to play the leading role when Ronaldo is missing.

Luis Suarez is the favourite after scoring 40 goals for Barcelona in La Liga last term as he finished five clear of Ronaldo, while Messi (26) and Neymar (24) were way behind.

However, with Barca there is always the possibility of the goals being shared more evenly than at Real Madrid. It’s also unclear which one of the front players will be taking penalties.

The magical Messi can never be written out of the calculations even though he seems to enjoy playing slightly deeper these days and of the trio Neymar could be the pick of the value.

Bayern Munich duo Robert Lewandowski and Thomas Muller are always respected but there are unlikely to be many easy goals in a group alongside Atletico Madrid and PSV Eindhoven, who played out the first goalless Champions League two-legged tie in last season’s last 16.

Rostov are the weakest side in the section but Bayern’s trip to Russia on matchday five comes between key Bundesliga battles with Borussia Dortmund and Bayer Leverkusen and if qualification is secured Carlo Ancelotti may be tempted to rotate his squad.

Argentinian pair Gonzalo Higuain and Sergio Aguero will be the main goalscoring hopes for Juventus and Manchester City. Aguero’s fitness needs to be taken on trust and Higuain may have to share the scoring load with the excellent Paulo Dybala.

Dortmund may not go far enough for Pierre-Emerick Aubameyang to make a serious splash and Euro 2016 top goalscorer Antoine Griezmann will need to be at his brilliant best to get Atletico Madrid close given Diego Simeone focuses very much on the defence first.

Edinson Cavani has failed to convince during his time in France but with no Zlatan Ibrahimovic this could be his time to shine and of those in the middle of the pack he is most interesting.

However, PSG look a weaker side this season and are in a real battle with Arsenal for top spot in Group A as the winners should secure a perceived easier path in the last 16.

It is hard to be sure of who the Gunners will use as their central striker, while across north London Harry Kane needs to prove he is up to this level.

The Premier League’s top scorer had a miserable Euros with England and Leicester’s Jamie Vardy was not much better despite scoring against Wales.

Both have nice groups from which to ease their way into debut campaigns at Europe’s top table. Tottenham’s group looks balanced with Monaco, CSKA Moscow and Bayer Leverkusen for company but if the German outfit can nick top spot Javier Hernandez could seriously outperform his dismissive odds.

Leverkusen know only one way to play under Roger Schmidt. They are under the pump from the first whistle and attack, as shown by their 13 goals in six Champions League fixtures last term, and in all competitions Hernandez bagged 26 times from 40 appearances.

Chicharito has played for two massive clubs in Manchester United and Real Madrid but never managed to nail a regular first-team spot because he lacks the awareness to operate as a team player at such an elite level.

At Leverkusen he must press from the front but otherwise Hernandez’s only job is to get in the box and finish off the work of Leverkusen’s excellent midfield.

Maybe the Little Pea is a bit short of the kind of quality usually associated with Champions League Golden Boot winners but he is a fine goalscorer and a whopping price.