No stopping champion swaggering into final 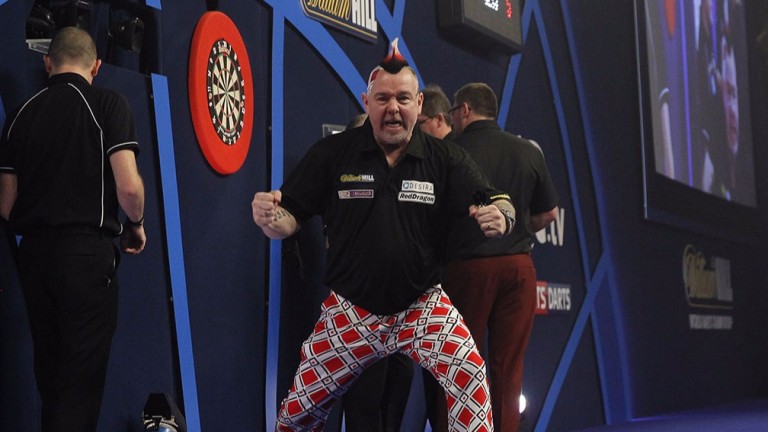 Anderson v Wright
Head-to-head: Anderson leads 17-11
Gary Anderson arrived at Alexandra Palace with new glasses, a slightly adjusted throwing action, and fresh from a second-round defeat to world number 83 Ron Meulenkamp in the Players Championship Finals. The inspiration of a stage Anderson has owned over the last three years, though, quickly revived the Scot.

Anderson cruised through his first two matches without dropping a set, and he has averaged more than 100 in the previous three rounds. Both Phil Taylor (2009-11) and Adrian Lewis (2011-13) have won 15 matches in a row at Ally Pally, but Anderson is 16 and counting.

There has been an increasing swagger in the step of the defending champion and more on-stage aggression than normal. The 46-year-old is clearly thrilled that the switch to spectacles does not seem to have created the career wobble it could have done. Nobody appears to have had more fun in the first four rounds than Anderson and a place in the final seems likely.

Anderson, who nailed 12 maximums in a 5-3 victory over Dave Chisnall in the quarter-finals, nearly always comes to the oche with a guarantee of heavy scoring. Lipstick-lashing is Gazza’s strength and when doubles start being hit, too, few can live with him.

Peter Wright, attempting to reach a World Championship final for the second time after losing to Michael van Gerwen in 2014, is a rock-solid all-rounder who has averaged more than 100 in all four previous rounds. Wright, prone to equipment changes, has stuck with the same set of darts for a little while and is getting excellent results.

The suspicion, though, is that Wright lacks the extra gear required to overcome an in-form Anderson. The harsh truth is that Wright regularly gets to the latter stages of major tournaments without ever winning. The 46-year-old has held trophies aloft in dark, non-televised darting backwaters such as Barnsley, Coventry and Crawley, but is always found wanting at the end of major events.

Van Gerwen v Van Barneveld
Van Gerwen leads 26-16
It looks like Michael van Gerwen is going to have to win the World Championship the hard way – by beating both the men who have slain him most recently at Ally Pally.

Two years ago, Gary Anderson beat Van Gerwen 6-3 in the semi-finals, then last year Raymond van Barneveld upset his much younger compatriot in an epic third-round clash which went the distance. Van Gerwen has the scent of revenge in his nostrils.

The Barney versus Mighty meeting last year was a contest of ridiculously high quality, with Van Gerwen averaging 105.78 in defeat. Surely Raymond, aged 49 and without a prestigious title since winning the 2014 Premier League, will not be able to pull another rabbit from the hat.

Barneveld has admitted in interviews he feels like Tom Cruise in Mission Impossible this year, having been handed a stinker of a draw. Barney has overcome Adrian Lewis and Phil Taylor – can he follow up by seeing off Van Gerwen, then probably Gary Anderson, for an incredible sixth World Championship triumph?

It is a fanciful suggestion. This is Barneveld’s third consecutive Ally Pally semi-final. For a player who has slipped down the rankings in the last few years and does not automatically qualify for some elite gatherings, a continued World Championship last-four presence shows how this mercurial talent can rise to the occasion. But a third consecutive semi-final defeat beckons.

Van Gerwen, winner of 25 tournaments in 2016, is the boss of modern darts and a different kettle of fish to Lewis and Taylor. Van Gerwen’s averages in his first four matches of 103.34, 105.24, 104.44 and 103.08 are likely to be bettered with increased focus and respect for his opponent. Expect a ruthless Van Gerwen to avenge last year’s defeat in spectacular fashion.

Spreadwise: MvG to show no mercy

Much has been made about Raymond van Barneveld supposedly having some sort of psychological edge over compatriot Michael van Gerwen, but their head-to-head record dismisses the myth.

Van Gerwen has won 26 of their 42 meetings and can quickly take control of their William Hill World Darts Championship semi-final tonight. Buy Van Gerwen’s set supremacy at 17 with Sporting Index.

If there is anything to the suggestion that Barney provides a different mental test from other opponents for Van Gerwen, it is that Mighty Mike affords the former top dog of Dutch darts more on-stage respect than other rivals.

Expect that courtesy to go out of the Ally Pally window tonight, though, as an ultra-pumped Van Gerwen seeks revenge for his World Championship defeat of last year.