No lack of motivation for qualified England 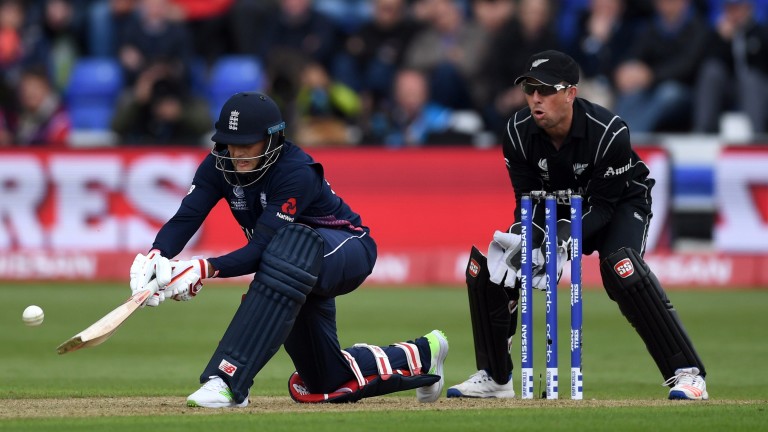 Joe Root is a crucial batsman for England, top-scoring in both games at the Champions Trophy
Gareth Copley
1 of 1
By James Milton 8:00PM, JUN 9 2017

The domestic football season is over but punters are still puzzling over fixtures that feature one team who ‘need’ a result more than their opponents.

England are already guaranteed a place in the Champions Trophy semi-finals while Australia require a victory at Edgbaston to progress after washouts against New Zealand and Bangladesh.

Most bookmakers are unable to split the pair, reasoning that the Aussies’ extra motivation for this virtual quarter-final will counter-balance England’s home advantage and superior quality.

However, in such a short tournament – three group games, a semi-final and the final – it is vital to maintain a winning habit and England, victorious in ten of their last 11 ODIs, won’t want to let their standards slip.

It’s not just about professional pride for Eoin Morgan’s men – their chances of lifting the trophy would undoubtedly be boosted if they can eliminate their oldest cricketing rivals, who were second-favourites at the start of the tournament.

England have won well against Bangladesh and New Zealand, despite not being at their best, while the Aussies will be fired up after the frustration of their last outing against Bangladesh, when they were four overs away from a crushing win on the D/L method before rain ended the contest.

Best bet
England’s perceived lack of motivation may not be a decisive factor in this game and the hosts merit a bet at 10-11.

Australia are still feeling their way into the tournament – they batted for only nine overs against New Zealand and 16 against Bangladesh before the weather intervened.

Steve Smith’s side were undoubtedly robbed of victory against the Tigers but they would have been relieved to get away with a point against the Kiwis, having been reduced to 53-3 chasing 235 in 33 overs.

Their problematic middle-order still hasn’t been tested in the tournament and, although their fast bowlers tore through the Bangladesh batting, reducing them from 122-3 to 182 all out, England pose a far tougher test.

Even with Jason Roy struggling at the top of the order, England have a wealth of batting talent with all of the top seven capable of playing match-changing innings.

Alex Hales and Joe Root put on 159 and 81 for the second wicket in the first two games and Morgan’s last seven ODI innings include 76 against Ireland, 107 against South Africa and an unbeaten 75 against Bangladesh.

Ben Stokes, who also made a ton against the Proteas, looked in superb touch against the Kiwis on Tuesday, and Moeen Ali (77 off 51 balls against South Africa at Headingley) and Jos Buttler (61 off 48 against New Zealand in Cardiff) have played crucial knocks at the death.

Mitchell Starc, Josh Hazlewood and Pat Cummins, supported by spinner Adam Zampa, were too good for Bangladesh’s batsmen at The Oval but England can fight fire with fire when it comes to quick bowling.

Mark Wood’s return to fitness seriously peps up their one-day attack and Liam Plunkett has taken 28 wickets in just 11 ODIs this year.

Venue
South Africa crawled to 219-8 on their way to a rain-affected loss to Pakistan at Edgbaston but that was out of character for a ground that has seen some massive one-day totals recently.

Team news
Adil Rashid slotted back into the England side with 2-47 off ten overs against New Zealand and should keep his place along with Roy, who retains the faith of the management despite a lean run of scores.

Rashid’s fellow leg-spinner Zampa picked up two quick wickets against Bangladesh and will be hoping for another outing.

Weather
The outlook for a completed match looks promising with light cloud for much of the day, showers possible from around 6pm, and highs of 19C.