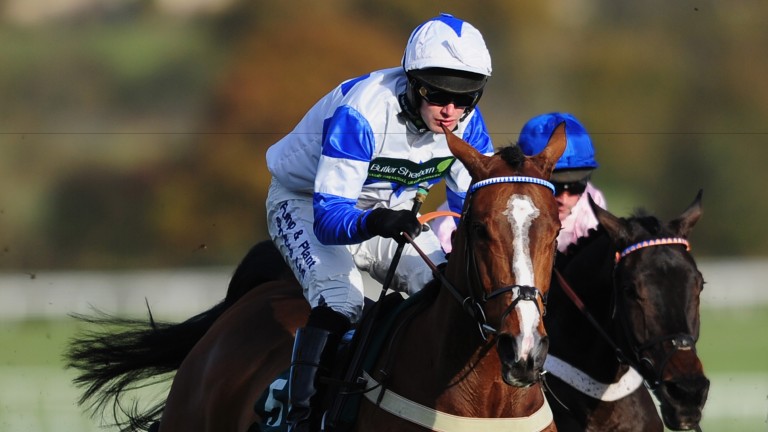 The main appeal of sport is its ability to shield you from the hassle and tedium of real life, allowing you to escape to a happier mental state. Finding that piece of mind is one of the glorious attractions of a day at Cheltenham racecourse.

And so it was that at just after two o’clock last Friday afternoon I was standing on the balcony of the top floor of the beautiful new stand, looking out across the sunlit course, casting my gaze upward to the dreamy hills that provide this special place with such a magical backdrop and thinking things weren’t so bad.

I was still slightly annoyed that I had come up with the idea of running the headline UNDER BARTERS ORDERS on the front page roughly four hours after the presses had started rolling, but thinking of a half-decent line too late is something I’ve become used to so never mind.

And anyway there was Barters Hill himself, halfway to the horizon, looking great and getting ready to embark on his chasing career. An exciting moment.

He had already built a big fan club based on his exploits in bumpers and over hurdles that had yielded six highly promising wins before he’d come up a little short in the Albert Bartlett last March, and now we would find out whether he could go on to achieve even more over fences.

This was no purring Porsche of a racehorse. He’d already shown he needed to graft to get his head in front but he had an engine that would get you to Timbuktu and back and that was half the attraction. Jumps fans love nothing more than a horse with a heart and an appetite for a battle.

So off they went, drenched in golden autumn sunshine, and everything seemed to be going just fine. He was at the front as usual and jumping nicely until, shortly before they crossed the last one before heading out for the final lap, he jinked a bit.

And then, after jumping it, he was pulled to the outside by David Bass and brought to a gradual halt. It was almost serene rather than the type of frantic deceleration a jockey is forced to make when something is drastically wrong but still alarm bells began to sound.

As the others pressed on, the outcome of their contest becoming less relevant by the stride, all eyes were on Barters Hill as he was dismounted in sight of the stands.

Events take on a different feel when you don’t have the reassurance of a commentary. As the public address system continued to describe the conclusion of the Steel Plate and Sections Novices’ Chase, the eyes recorded first the lone figures of horse and concerned rider and then people converging on them from all angles at speeds that suggested something was worryingly amiss.

But there was nobody telling you what was happening. You had to try to reach your own conclusion.

Help was quickly at hand. We could see what looked like veterinary experts on the scene, and maybe that was the groom running towards the horse. What must they have been thinking?

Then the screens were removed from their covers. Those green drapes of doom were unwrapped and erected to shield increasingly concerned eyes from the possibility of a heartbreaking conclusion to a horse’s life.

And who was this, hurrying along with something long and thin on his shoulder? Was it some sort of gun?

We tried to make sense of it. The sun gave the screens a slight translucence and every so often the top of the horse’s handsome head would appear, his ears pointing rigidly upwards.

But just when you allowed yourself to be encouraged by that you thought back to those happy episodes when the screens are removed and the horse and his tearful handler walk, shaken but stirred, back to the stables, ready to fight another day, and noted those magical moments tended to occur when a heavy fall had merely winded the beast.

After a while, during which no distant thud could be heard, the equine ambulance reversed towards the group of helpers and it was possible to make out Barters being walked inside. The vehicle drove off, the screens came down and everyone dispersed.

I was too far away to be able to make out telltale facial expressions but it didn’t seem too gloomy a scene, so then it was over to the phone to provide more details.

And this story did end well. Barters Hill, it was revealed, slipped a tendon off a hind hock (no, I’m not sure either) and, while we will not see him on a racecourse for many months, the sight of his trainer Ben Pauling standing next to him in his box that evening holding a sign saying “I’ll be back – thanks for all the get well messages” was wonderful.

Just two days later Simonsig, the beautiful grey who once seemed to have the world at his feet, did not survive a fall at the same venue. And nor this month were a clutch of other horses as lucky as Barters Hill to go to the races in the morning, meet with adversity, and make it home again that night.

But I can still defend the sport without feeling like I’m kidding myself. In an ideal world no horses would die in the name of sport, but the fact is this: racing creates vastly more equine life than it takes away.

And those lives are lived in cosseted luxury, with love showered upon them by those who look after them in return for a few minutes of brave exertion a few times a year.

Ban racing and the lucky horses will be those who are found a good home in a field. But even there they are not completely safe from harm, as the recent death of poor Vautour showed.

Racing has highs and lows, and nothing brings us down more than fatalities. Thank goodness, then, that those increasingly worrying minutes when we wondered whether Barters Hill would make it had a happy ending.

Pleasing to see Tour clamp down on lack of foresight

A man I know who used to work in the world of professional golf once expressed his dislike of those people lucky enough to play the game for a living.

“I work on the basis that 97 per cent of them are complete tossers,” he said. “And if you happen to meet one of the three per cent that aren’t you’ve been lucky.”

I wouldn’t have a clue whether his ratios are accurate but he’s a sound enough bloke so I certainly wouldn’t have high expectations if someone introduced me to a pro golfer.

And their collective reputation was not helped last week by the need for the European Tour to remind its members to shout fore when they hit a shot that heads towards spectators.

The shouting of fore is described as etiquette but it is more than that. Wrong use of etiquette usually has consequences no more serious than a snobby dinner party host reminding themselves not to invite the neighbour again because he used the wrong fork for the main course.

Failing to alert spectators that a small, hard, white missile is hurtling towards them could result in serious injury.

It is believed those players who do not shout fore are banking on the crowd standing upright upon impact so that the ball has a better chance of rebounding back in play, which, if true, is indeed the thought process of a tosser.

I commend the European Tour for taking action but, as with slow play, they need to follow it through and disqualify offenders if necessary.

By the way, nothing to do with shouting fore and only tacked on here because I can’t think of another way to get this off my chest, but can anyone name a tattooed golfer? I watch an unhealthy amount of golf and cannot think of a single inked pro. Tweet me on @brucemillington if you can put me out of my misery.

FIRST PUBLISHED 7:31PM, NOV 16 2016
This was no purring Porsche of a racehorse. He'd already shown he needed to graft to get his head in front but he had an engine that would get you to Timbuktu and back and that was half the attraction
Bookmaker
Price
E.W. Terms
bet365
Open Account
Ladbrokes
Open Account
William Hill
Open Account
Coral
Open Account
Paddy Power
Open Account
Betfair
Open Account
Sky Bet
Open Account
Sporting
BetVictor
Boylesport
888sport
TODAY'S OFFERS
TODAY'S BOOKMAKER OFFERS
Exclusive to new customers: