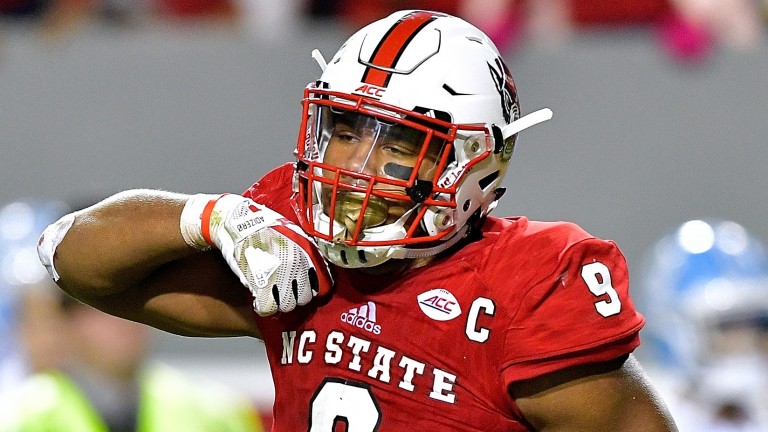 Bradley Chubb could go early in the first round of the NFL Draft
Grant Halverson
1 of 1
By Andrew Wilsher UPDATED 2:25PM, APR 26 2018

All eyes will be on Arlington, Texas on Thursday as the hotly anticipated NFL Draft rolls into action.

In all, 256 college players will be selected by the 32 NFL teams, with Cleveland, who ended last season without a win, starting the process, right through until we reach Super Bowl champions Philadelphia at number 32 before the process starts all over again.

However, it's not quite that simple. Teams will trade with other franchises to try and move further up the list to get the players they want, and some outfits have multiple picks due to deals struck in previous years.

For instance, Cleveland already have the fourth pick as well having traded with Houston last year and the New York Jets have moved up to third from sixth after reaching an agreement with Indianapolis.

Some teams will have strong desires for to strengthen particular positions while others may just take the best player available when their turn comes.

It's a night when anything can happen but here's our view on who may go where in the first round.

1 Cleveland - Sam Darnold, QB, USC
The Browns have been tight-lipped as to who they are taking at number one, but Darnold has the greatest potential of the quaraterback class and can turn Cleveland around.

2 New York Giants - Bradley Chubb, DL, NC State
New Giants general manager Dave Gettleman was known for building the team around lines while with Carolina, and Chubb is a great candidate to fill the hole left by Jason Pierre-Paul.

3 New York Jets (via Indianapolis) - Baker Mayfield, QB, Oklahoma
Moving up from number six made it clear the Jets were going all out to get the man they want, and can finally end their decade-long search for a franchise quarterback.

4 Buffalo (via Cleveland) - Josh Allen, QB, Wyoming
The Bills could trade up to number four by giving the Browns their two first-round picks this year and they can get a quarterback to finally bring some stability.

5 Denver - Josh Rosen, QB, UCLA
The Broncos legendary general manager John Elway has struggled to find a replacement for Peyton Manning and he will be keen to acquire the services of the best pure passer in the draft.

6 Indianapolis (via New York Jets) - Saquon Barkley, RB, Penn State
With quarterback Andrew Luck coming back from such a long injury, the Colts will want to get their run game going to take the pressure off, and the superstar running back is the perfect pick.

7 Tampa Bay - Minkah Fitzpatrick, DB, Alabama
Fitzpatrick can make an immediate impact and become the new leader of the defence.

9 San Francisco - Roquan Smith, LB, Georgia
Smith is ready to be the new leader of the Niners defence, and minimises the damage of Reuben Foster’s character concerns.

10 Oakland - Tremaine Edmunds, LB, Virginia Tech
The Raiders would be disappointed to miss out on Smith, but Edmunds is a pass rusher with the potential to be every bit as good.

11 Miami - Quenton Nelson, OL, Notre Dame
He has all the makings of being an all-pro lineman, and can add extra flair to a Dolphins offensive line already boasting 2016 first-rounder Laremy Tunsil.

12 Cleveland (via Buffalo) - Vita Vea, DL, Washington
The Browns could trade down to add some energy to a ferocious defensive line alongside Myles Garrett.

13 Washington - Derwin James, DB, Florida State
A defensive back who can do it all, the Redskins would love to have James partner Josh Norman in the secondary.

14 Dallas (via Green Bay) - DJ Moore, WR, Maryland
The Cowboys can move up to find their Dez Bryant replacement and take the first receiver off the board.

15 Arizona - Calvin Ridley, WR, Alabama
A pick that allows Ridley to learn from Larry Fitzgerald before eventually taking over as number-one receiver himself.

16 Baltimore - Mike McGlinchey, OL, Notre Dame
With the top two receivers off the board, the Ravens instead may take McGlinchey to boost their run game and provide Flacco with added protection.

17 Los Angeles Chargers - Marcus Davenport, DL, UTSA
The Chargers already have a solid roster, but Davenport is raw and can create a feared pass-rush duo alongside Joey Bosa.

18 Seattle - Josh Jackson, DB, Iowa
A playmaker who will be an ideal replacement for Richard Sherman that can fit into their zone coverage scheme.

19 Green Bay  (via Dallas) - Harold Landry, DL, Boston College
The Packers may trade down and take the man who can finally fill the pass-rushing hole that has hampered them for a while.

20 Jacksonville (via Detroit) - Lamar Jackson, QB, Louisville
With question marks persisting over Blake Bortles’s position as the quarterback, the Jaguars could trade up nine places to land the man who could win them a Super Bowl.

21 Cincinnati - Connor Williams, OL, Texas
Once considered a top five pick, Williams can add a spark to what is currently a woeful offensive line.

22 Cleveland (via Buffalo) - Kolton Miller, OL, UCLA
With their third pick of the round, the Browns may elect to provide Sam Darnold with some protection after the retirement of Joe Thomas.

23 New England - Rashaan Evans, LB, Alabama
Led the Alabama defence to a Championship, and is exactly the type of underrated player that Belichick will love.

24 Carolina - Hayden Hurst, TE, South Carolina
With Greg Olsen coming back from a foot injury and age becoming a factor, Hurst is ready to become the Panthers’ new tight-end threat.

25 Tennessee - Leighton Vander Esch, LB, Boise State
He isn’t the most athletic player, but his knowledge of the game will fill the Titans’ big need at the position.

26 Atlanta - Taven Bryan, DL, Florida
The former Gator can plug the middle and stop the run, which is what the Falcons will be looking for in their pursuit of Super Bowl glory.

27 New Orleans - Maurice Hurst, DL, Michigan
After an irregular heartbeat stopped him from competing at the combine, Hurst was cleared at his pro day and can be a grand addition to the defensively strong Saints.

28 Pittsburgh - Malik Jefferson, LB, Texas
Jefferson is an ideal replacement for James Harrison and can compliment Ryan Shazier well if the veteran recovers from injury.

30 New York Giants (via Minnesota) - Mason Rudolph, QB, Oklahoma State
The Giants may trade back into the first round and prepare for life after Eli Manning by choosing a quarterback with the skill and leadership potential to rejuvenate the team.

31 New England - Derrius Guice, RB, LSU
A dynamic presence with speed and strength that can offer the Patriots some consistency at running back.

32 Oakland (via Philadelphia) - Jaire Alexander, DB, Louisville
The Raiders may re-enter to further bolster their defence as they look to return to the playoff picture.