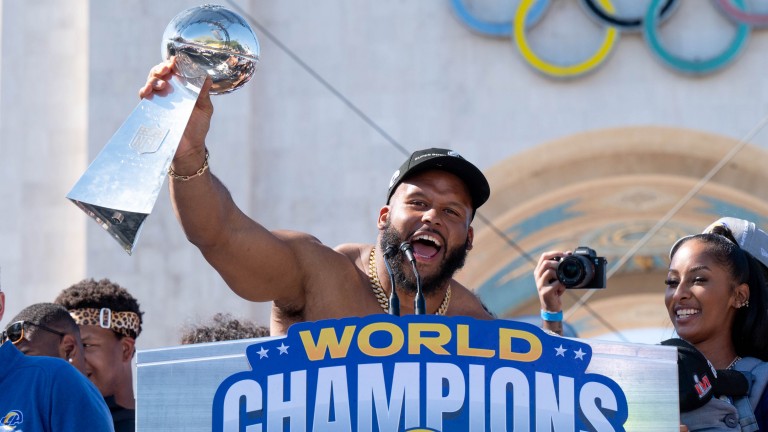 With an unforgettable 2021 NFL season now in the rearview mirror, attention has started to turn towards who might win next year’s Super Bowl.

This year’s top prize went to the Los Angeles Rams after one of the most unlikely Super Bowls in recent history, the Rams beating the Cincinnati Bengals 23-20 at SoFi Stadium.

While the Rams harboured genuine Super Bowl ambitions entering the season, few expected 200-1 shots the Bengals to get so far, proving anything is possible in the NFL.

However, with five of the last eight Super Bowl winners starting the season at single-digit prices and only two of the previous 12 champions beginning the campaign at odds of 20-1 or bigger, runs like the one the Bengals enjoyed are rare.

After a crazy start to free agency which featured some huge moves, the betting landscape for next year’s Super Bowl in Arizona suddenly looks very different.

Oddsmakers are finding it tough to split the Kansas City Chiefs and Buffalo Bills in the early betting for the Super Bowl with a slight preference towards 13-2 chances Buffalo.

Neither made the Super Bowl this year with the Chiefs falling just short, making a fourth successive AFC Championship game only to lose to the Bengals.

Kansas City had accounted for the Bills in the previous round of the playoffs in a classic contest and with two top-quality quarterbacks on board in Patrick Mahomes and Josh Allen, both are likely to make the postseason again.

While the Chiefs were relatively quiet in free agency, the Bills opened up their cheque book to sign premium linebacker Von Miller to a six-year, $120 million deal, improving what was already an excellent defence.

The Chiefs' cause hasn't been helped by their AFC West divisional rivals pulling off some massive trades in an effort to challenge them. The Denver Broncos' odds have been slashed to 10-1 with most firms after they brought in quarterback Russell Wilson from Seattle.

Not to be outdone, the Las Vegas Raiders made Davante Adams the highest paid wide receiver in history when snaring him from the Green Bay Packers. They also swooped for top defensive talent Chandler Jones, helping to make the AFC West the most competitive division in the NFL.

Also in a competitive division are the reigning AFC champions, the Cincinnati Bengals, with Paddy Power making them 20-1 to go one better than this year's Super Bowl loss.

They too have an excellent quarterback in Joe Burrow and have tried to address the lack of protection he received last season. Although they look to have improved, they face stiff competition just to make it back to the playoff from within their division with the Cleveland Browns, Pittsburgh Steelers and Baltimore Ravens all likely to improve on this year’s efforts.

The Browns have made controversial quarterback Deshaun Watson the highest paid player in NFL history by handing him a $230million five-year deal after landing him in a trade with the Houston Texans. With Watson's legal issues still to be resolved, it remains to be seen when Browns fans will get to see him in a Cleveland uniform.

Baltimore’s playoff hopes were derailed by a never-ending stream of injuries to a defence that was a top-ten ranked unit the year before, while an offence lacking genuine weapons hurt quarterback Lamar Jackson’s production.

If they can address those issues then the 20-1 generally available holds appeal.

The Tennessee Titans, who finished the regular season as the AFC’s number one seed, New England Patriots and Indianapolis Colts will expect to be in the playoff picture too, joining a very long list of contenders from the AFC. The Colts have brought in quarterback Matt Ryan from the Atlanta Falcons in the hope of keeping their Super Bowl window open.

With so many quarterbacks on the move, the Green Bay Packers will have been delighted to have secured Aaron Rodgers on fresh terms, helping them remain contenders in a top-heavy NFC. The loss of Adams to the Raiders is a significant blow though and they'll need to replace him to give Rodgers the tools he needs to succeed.

Four of the top seven places in the Super Bowl betting are occupied by NFC representatives with the Tamp Bay Buccaneers leading the way at 8-1.

Their price has fluctuated dramatically in the wake of Tom Brady's retirement announcement and subsequent return, drifting out to 25-1 before being drastically trimmed upon Brady's comeback.

The defending champions the Rams are a 10-1 shot and should have star defensive talent Aaron Donald back after he'd hinted he could retire in the aftermath of their Super Bowl success. However, they have lost Odell Beckham Jr and Miller, key pieces in their Super Bowl run.

The picture with the Rams is a little unclear right now and the same goes for 14-1 shots the San Francisco 49ers. The Niners are looking to trade Jimmy Garoppolo and start Trey Lance - the third overall pick in the 2021 draft - at quarterback and it looks a lot to ask of Lance to lead them back to the NFC Championship game.

The most settled of the leading NFC contenders could prove to be the Dallas Cowboys.

America’s Team haven’t been to a Super Bowl in 26 years but look to have the roster necessary to make a run at the Lombardi trophy. Both the offence and defence finished the regular season ranked in the top five and they should be shorter than 16-1.

With a couple of leading contenders in the NFC appearing vulnerable, the Minnesota Vikings and newly-named Washington Commanders could out-perform their prices.

The Vikings have made a much-needed coaching change, hiring Rams offensive coordinator Kevin O'Connell, and he should get more out of a Minnesota roster that’s underperformed the last two years.

The Vikings are a 50-1 chance, with Washington as big as 60-1 with Hills. They were another side crippled by injuries last season but have a strong defence and good skill players on offence, making them a dangerous prospect.

FIRST PUBLISHED 6:55PM, FEB 20 2022
America’s Team haven’t been to a Super Bowl in 26 years but look to have the roster necessary to make a run at the Lombardi trophy