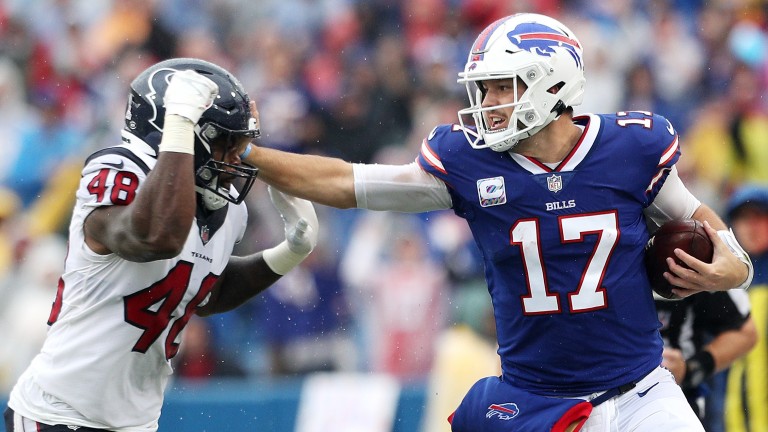 Buffalo Bills quarterback Josh Allen is in the running to be named NFL MVP this season
Bryan M. Bennett
1 of 1
By Joe Casey UPDATED 9:03AM, OCT 15 2021

NFL betting odds and analysis for Super Bowl LVI and for the 2021 regular season MVP award.

After back-to-back Super Bowl appearances, the Kansas City Chiefs went into this season fancied to continue their dominance of the AFC all the way to Super Bowl LVI at the SoFi Stadium next February.

However, after losing three of their first five games of the new campaign, KC have been beaten more times than they were in the entire 2020 regular season and sit rock bottom of the AFC West.

Just a year after they signed quarterback Patrick Mahomes to the second most expensive contract in the history of sports, their talisman is struggling.

Kansas City are joint-top of the turnover leaderboard with the Jacksonville Jaguars on 11 and this has led to the exposure of their poor defence.

The Chiefs have conceded the most points of any team in the NFL this season. In their last two seasons of success, the team have been known for their comebacks and victories in high-scoring games, but this season Mahomes hasn’t been able to bail out the defence in the same manner.

After their latest loss to the Buffalo Bills the Chiefs have lost their grip on favouritism for the Super Bowl for the first time since last year’s showpiece. Drifting out to a general 7-1 shot, the Chiefs have been eclipsed in the betting by both the Bills and last year’s winners, the Tampa Bay Buccaneers.

In a closely contested betting heat, the Bills and the Bucs have replaced the Chiefs at the head of the pile as joint favourites with both general 11-2 shots.

In the chasing pack, there are four teams floating between 10-1 and 12-1 for the Super Bowl title - the LA Rams, Green Bay, Baltimore and Arizona.

In the NFL’s MVP race, there has also been a changing of the guard at the top of the betting. Having led his Buffalo Bills side to a 38-20 victory over Mahomes and the Chiefs, Josh Allen is now favourite for the prestigious award.

The dual-threat quarterback already has the franchise record for most rushing touchdowns by a quarterback, along with a number of passing records from last season including his 4,544 passing yards.

Allen’s Bills are at the summit of the AFC East once more with a 4-1 record and the 25-year-old has helped rack up an NFL-topping 172 points along the way. The Wyoming native is now as short as 7-2 in places for the MVP award come the end of the season.

At the head of the betting, Allen’s primary rival is Arizona Cardinals quarterback Kyler Murray. Another dual threat, the former MLB draftee Murray has been key in the Cardinals only remaining perfect record in the league and is a 5-1 shot for MVP honours.

Elsewhere Justin Herbert, Dak Prescott and the evergreen Tom Brady are closest to the head of the betting, all trading between 6-1 and 8-1 to take home the award.