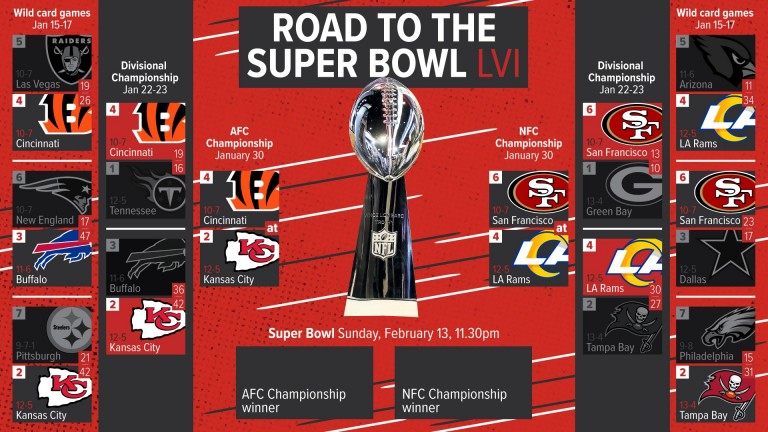 The Super Bowl is the culmination of the NFL season, with the top team in the AFC and NFC conferences facing off having fought off the rest of the competition throughout the regular season and playoffs. The Tampa Bay Buccaneers beat the Kansas City Chiefs last year 31-9 with an audience of 91.63 million in the US.

What happened on wild card weekend?

The wild card round largely went the way bookmakers had expected with only one upset across the six games. The only underdogs to advance were the San Francisco 49ers, who held off a late rally by the Dallas Cowboys to triumph 23-17.

All five of the remaining games went the way of the home teams with the Cincinnati Bengals beating the Las Vegas Raiders on Saturday to end a 31-year wait for a playoff win. That was followed by a one-sided Buffalo Bills victory over their divisional rivals the New England Patriots at a sub-zero Orchard Park.

On Sunday, the Tampa Bay Buccaneers had little trouble overcoming the Philadelphia Eagles and stormy conditions to advance, while the Kansas City Chiefs were equally as dominant when squashing the Pittsburgh Steelers 42-21 later in the day.

The Los Angeles Rams wrapped up wild card weekend with an Odell Beckham Jr-inspired win against the Arizona Cardinals on Monday.

What happened in the divisional round?

After a fairly predictable wildcard round, the divisional games were anything but.

The underdog Cincinnati Bengals overcame the number one seed in the AFC, the Tennessee Titans, 19-16 on the back of a strong performance from young quarterback Joe Burrow.

The San Francisco 49ers got the better of the Green Bay Packers 13-10 in frigid conditions to take their recent playoff record over the Super Bowl favourites to 4-0.

Tom Brady threatened another of his famous playoff comebacks in the game between his Tampa Bay Buccaneers and the Los Angeles Rams, levelling the tie having been down 27-3 in the second half.  However, a late field goal from the Rams prevented another fairytale ending for Brady.

A wild encounter between the Buffalo Bills and Kansas City Chiefs was the perfect end to the divisional weekend, with the Chiefs coming out on top 42-36 in overtime in a back and forth game.

Both quarterbacks threw for over 300 yards and at least three touchdowns as the lead swung back and forth. 25 points were scored in the last two minutes before a late Chiefs field goal sent it to overtime, where they won the coin toss and converted.

What are the odds in the Championship games?

The Cincinnati Bengals are big underdogs once again in their AFC Championship encounter with the Kansas City Chiefs. The Chiefs are seven-point favourites to reach their third Super Bowl in as many years.

In the NFC Championship things are a little closer, with the Los Angeles Rams 3.5-point favourites over the San Francisco 49ers.

How can I watch the NFL playoffs?

Sky Sports NFL will show every game throughout the playoffs.

Who are the favourites to win Super Bowl 2022?

The Kansas City Chiefs are now the Super Bowl favourites, having reached The Show in the last two years. The Chiefs are best priced 13-10 with William Hill to win the Vince Lombardi Trophy. The Los Angeles Rams are next in the betting at a general 21-10.

The San Francisco 49ers are 9-2 to win the Super Bowl while the biggest price of the quartet are the Cincinnati Bengals, available with bet365 at 9-1 to complete an unlikely victory.

Super Bowl LVI is set to take place on the 13th February. As a result of the NFL regular season’s expansion to 17 games, it will be the first Super Bowl to be held on the second Sunday in February.

The game will be played at the SoFi Stadium in Inglewood, California. The stadium opened in September 2020 and is the home venue of the Los Angeles Chargers and Rams. This year’s event will be the eighth Super Bowl in the Los Angeles area but the first since 1993.

What time is the Super Bowl half-time show?

The length of the first half can vary, but the half-time show is expected to start at around 1.30am UK and Ireland time.

Who is performing in the Super Bowl half-time show?

Where to watch the Super Bowl in the UK?

The Super Bowl will be live on BBC One and BBC iPlayer as well as on Sky Sports NFL, Sky Sports Mix and Sky Sports Main Event.

The game can also be accessed through NOW TV and the NFL's Game Pass service.

Who are the star players?

Quarterbacks often dominate the regular season MVP race and this year is no exception with Green Bay's Aaron Rodgers odds-on to claim the prize for a second straight year. Tampa Bay's legendary QB Tom Brady is also in the conversation and while Patrick Mahomes and Josh Allen of the Kansas City Chiefs and Buffalo Bills aren't in the MVP mix this year, they have lit up the playoffs.

Of those remaining Mahomes is most likely to take Super Bowl MVP if his team make it that far. His quarterback performances in the playoffs so far have been standout and he took the crown two years ago.