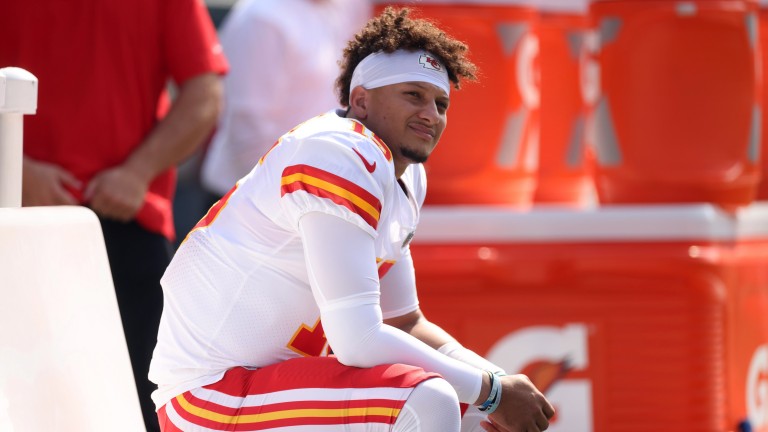 Chiefs quarterback Patrick Mahomes hit his stride at the end of the regular season
Simon Bruty
1 of 1
By Chris Rivers UPDATED 4:05PM, JAN 14 2022

Free NFL picks, best bets and analysis for the NFL playoffs and the road to the Super Bowl 2022.

The line-up for the NFL playoffs is complete after a remarkable regular season reached a wild conclusion as the Las Vegas Raiders, San Francisco 49ers and Pittsburgh Steelers all locked up their postseason spots with overtime wins in Week 18.

And yet after all the drama of the regular season, could this campaign have an entirely predictable ending with the pre-season favourites Kansas City achieving redemption by winning Super Bowl LVI?

The Chiefs were humbled by the Tampa Bay Buccaneers in last year’s title decider and looked to be suffering a serious hangover at 3-4 after seven weeks.

For the past two seasons, their offence has been the star of the show for the Chiefs but it wasn’t Patrick Mahomes and co who turned their year around as the defence dragged them out of their slumber.

Eight consecutive wins later the Chiefs were back, winning the AFC West and booking a playoff spot as they went on to finish the regular season 12-5. Their defensive unit gave the Chiefs' offence time to get back on track and Kansas City now look like the most complete team in the AFC.

They are 2-1 favourites to win the conference title for a third straight year and begin their playoff campaign at home to a Pittsburgh side they thrashed 36-10 at Arrowhead in Week 16.

The Buffalo Bills are expected to be the main challengers to the Chiefs' divisional crown but have failed to convince that they are ready to go one step further than last season’s conference championship defeat.

The Cincinnati Bengals have the potential to cause a shock with their red-hot offence but could eventually be let down by a suspect defence, while the New England Patriots, Raiders and Steelers will do well not to be one and done in the playoffs.

Instead, the Chiefs' biggest threat should come from the Tennessee Titans, who look value at 17-2 to win the Super Bowl. The Titans are much maligned, confounding the NFL’s analytical model to go 12-5 and secure the AFC’s number one seeding in the process. Of the 62 teams to enter the playoffs ranked number one since 1990, 32 have gone on to reach the Super Bowl, and yet the Titans appear an afterthought.

The Titans' defence has been excellent all year, while the offence is about to get its most dangerous weapon back with Derrick Henry due to return from a foot injury.

One of the Chiefs or Titans look most likely to emerge from the AFC and head to Los Angeles's SoFi Stadium, where bookmakers expect them to face the Green Bay Packers in the title showdown.

The Packers are 4-1 favourites to win the franchise’s fifth Lombardi trophy after they powered through the regular season, securing the NFC’s number one seed thanks to another MVP-calibre season from Aaron Rodgers.

Rodgers took the Packers all the way to the NFC Championship game last season, only to come up short against champions Tampa Bay. Tom Brady’s Bucs are seen as Green Bay’s main rivals for the conference title and they are 8-1 to become the first team since Brady’s New England Patriots to win back-to-back Super Bowls in 2004 and 2005.

Brady continues to defy time and the 44-year-old finished the regular season with a league-high 43 passing touchdowns and 5,316 passing yards. With Brady in top form, Tampa Bay are a danger, despite dealing with injuries to key members of their offence.

The Bucs open their playoff campaign against the Philadelphia Eagles, the outsiders in a conference that seems packed with potential Super Bowl winners.

The Los Angeles Rams and Dallas Cowboys will fancy a deep playoff run, while the Arizona Cardinals deserve respect despite cooling off after a hot 7-0 start.

The 49ers are built to win playoff matches, demonstrating an excellent ability to run the ball while limiting the opposition with a top-class defensive front. They won’t prove easy opponents for Dallas in the wild card round, despite being on the road.