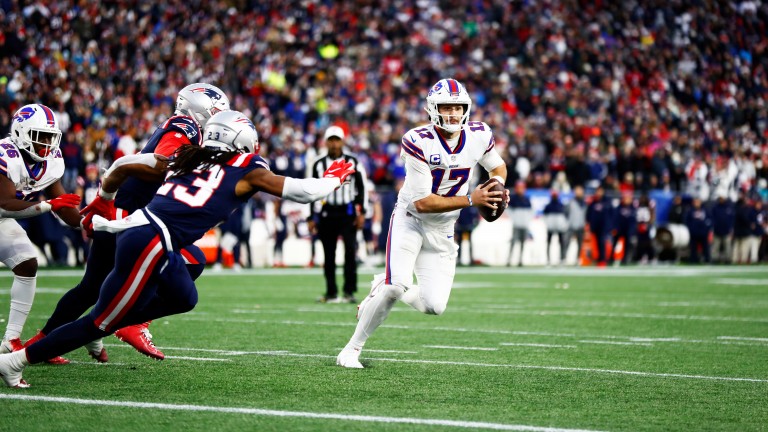 Bills quarterback Josh Allen has to tuck and run in the regular season against the Patriots
Omar Rawlings
1 of 1
By Connor Grootenhuis 5:20PM, JAN 14 2022

Free American football tips, best bets and analysis for the New England Patriots at Buffalo Bills in the wild card round of the NFL playoffs.

The New England Patriots and Buffalo Bills possess two of the best defensive units in the league and points could be at a premium when they meet in sub-zero conditions at Highmark Stadium.

Temperatures are forecast to drop to an Arctic-like minus 15 Celsius in Buffalo, although a steady breeze may mean it feels even colder than that.

The pair are also the best two defences in terms of points allowed with the Bills holding their opponents to a league-low 17 points per game while the Patriots were next best, giving up only 17.8 points per game on average.

The Patriots' defence has been able to stymie Buffalo quarterback Josh Allen at times during his career, and their storied coach Bill Belichick should be able to conjure up a solid defensive gameplan to stop him again. In eight games against New England, Allen has a 57 per cent completion rate, which is well below his career mark of 62.3.

Offensively, the Patriots may look to slow the pace of the game with the run.

Damien Harris has eclipsed the 100-yard mark on the ground in both games against Buffalo this season, and it seems unlikely that Belicick will put too much pressure on QB Mac Jones in his first career postseason start – especially given the Pats are also on the road.

Throw into the mix the points total going under in four of the pair’s last five meetings in Buffalo and that looks the way to go again.

The under is 4-1 in the last 5 meetings between these teams in Buffalo.