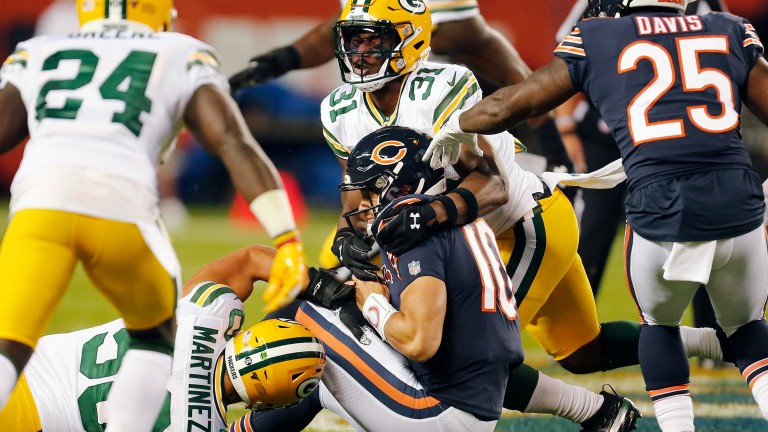 Chicago Bears have been shunted out from 22-1 to 28-1 to win the Super Bowl by RedZone after scoring just three points while losing the season-opening home game against the Green Bay Packers.

The Packers have been cut from 20-1 to 18-1 after their 10-3 NFC North road victory in which tight end Jimmy Graham scored the only touchdown.

Both defences were on top and Chicago, who had been 2-1 joint-favourites for the division with the Packers, are out to 5-2 with Green Bay cut to 7-4.

Antonio Brown, whose off-season issues had already included getting frostbite from a cryotherapy chamber and a long-running row over which helmet he is allowed to wear, looks set to miss the Raiders' Monday-night opener against Denver after a bust-up with general manager Mike Mayock, who had fined him for missing practice.

Julio Jones is expected to play for Atlanta against Minnesota despite an ongoing contract dispute and lingering foot injury. The Vikings are four-point favourites for that game.

And Cleveland should have Odell Beckham Jr available to make his Browns debut against Tennessee having nursed a hip injury through the pre-season.

"It’s getting better. We’ve got a game Sunday, so it’s time to go,” said Beckham, whose side are 5.5-point handicap favourites at home.