Unbeaten Chiefs go to the top of the tree 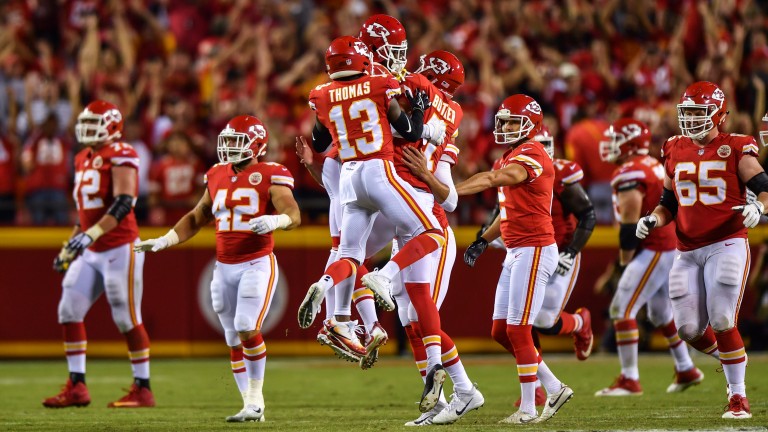 1 Kansas City Chiefs (up one)
Record: 4-0
Last week: Won 29-20 at home to Washington
This week: One-point favourites at Houston

The only unbeaten team in the league are at the top of the chart but they limped over the line against Washington. Houston should have the wind in their sails but with Alex Smith performing excellently at quarterback and strength on both sides of the ball, the Chiefs could take some shifting.

There were no miracles this week as the Patriots fell to a second home defeat of the season. If their defence do not get their act together then others will know that the champions are there to be shot at.

After their woeful loss to Chicago, the Steelers were back in business with a win over the team who should be their nearest NFC North rivals. Running back Le'Veon Bell had his most productive game of the season and there is cause for optimism, but the Jags could pose problems.

The Packers claimed what has become their customary win over the Bears. That they have won three of their four matches with a host of injuries, including two offensive tackles, is impressive and they should get stronger when their current problems clear up.

The Falcons slipped to their first defeat of the season against the Bills and the loss was made all the more painful when wide receiver Julio Jones picked up a hip injury. Their early bye week may not have come at a bad time.

6 Dallas Cowboys (down one)
Record: 2-2
Last week: Lost 35-30 at home to Los Angeles Rams
This week: Two-point favourites at home to Green Bay

The Cowboys saw some decent flashes from running back Ezekiel Elliott which have been missing in the last couple of weeks, but defeat to the Rams, especially at home was a poor result. The Packers will provide a key indication of how far they can go this year.

While other fancied teams were slipping up against outfits they were expected to beat comfortably, Seattle put in a fine all-round show against the Colts. The Seahawks dominated the second half and finishing matches strongly is an enviable habit to get into.

Another solid defensive performance from the Broncos who added a decent scalp to that of the Cowboys, who they beat in Week Two. It has been a pretty satisfactory first four weeks of work to reflect upon during their bye week.

The Vikings continue to have no luck with injuries. First quarterback Sam Bradford went down and now they have lost rookie running back Dalvin Cook to a knee injury just when he was showing great potential. Their slide could continue in the long term.

A win at the Patriots is never going to do a team any harm and it was heartening for Panthers fans and backers to see quarterback Cam Newton have his best game of the season. The defence is strong and they could be getting it together offensively.

Oh dear. Just as some of us were getting excited about Tennessee's chances this season, they get absolutely thumped by their AFC South rivals. The extent of quarterback Marcus Mariota's hamstring injury will have a huge bearing on their fortunes over the next few weeks.

Some remain unconvinced by Eagles quarterback Carson Wentz, but the team are getting the job done and Philadelphia merit their position at the top of the NFC East. It's worth remember that three of their first four matches have been on the road and the only team to have beaten them are the top-ranked Chiefs.

The Raiders could once again be stopped in their tracks by an injury to Derek Carr. If he is out for six weeks with a back injury, it is difficult to see them lasting the pace with Kansas City and Denver in the AFC West. Replacement EJ Manuel does not inspire confidence and it could again be a case of what might have been.

The Buccaneers have had to take their time to get going and their two victories have come against teams who have mustered just a solitary success between them. Their clash with New England will provide more pointers as to how they might get on. Running back Doug Martin is back from suspension to help.

The Lions keep holding their own and with the injury problems at Minnesota, they soon could provide the Packers with their toughest test in the NFC North. They were unlucky to suffer their only defeat at Atlanta and are capable of making strides up the chart.

A scrappy match may not have pleased many spectators at Wembley last week but Saints coach Sean Payton will have been delighted that his much-maligned defence prevented Miami from scoring a point. If you match that effort with the quality Drew Brees typically displays at quarterback then you will always have a chance.

An overtime touchdown from Larry Fitzgerald got the Cardinals over the line but there seems little to get excited about at Arizona this season. It could prove a middle-of-the-road campaign in which they don't make much of an impression.

Following up at win over Denver by beating the Falcons means it has been an impressive fortnight for the Bills. Their defence is a match for the best in the league and they could go on a decent run if they don't take it easy against teams who may be weaker than them. Such as Cincinnati.

The Ravens started the season with wins over Cincinnati and Cleveland but the last fortnight has been dismal, particularly for quarterback Joe Flacco. The offence have not got going at all and they look to be on the slide.

Since losing to the Eagles in Week One, Washington have beaten the improving Rams, nullified the Raiders offence and given the unbeaten Chiefs as tough a test as they have faced. There is scope for the Redskins to improve after their bye week.

Deshaun Watson went a huge way towards establishing himself as the new star at Houston with his inspiring performance against the Titans. The Texans' Week One capitulation against the Jaguars seems a long time ago and a visit from Kansas City should ensure they do not remain complacent after they blew the AFC South wide open.

Maybe their first-week bye and a trip to Wembley has knocked the Dolphins out of sync, but they have had two poor offensive performances with Jay Cutler not living up to the optimism that was around in pre-season. Hosting a Tennessee side who will be fuming after their loss at Houston is hardly ideal this week.

Still the Giants cannot get over the line. The passing game is improving but there is little joy to be gained from the running unit. Rapid improvement needs to happen if they are to be competitive in their division.

After their storming show at Wembley, a lack of discipline cost the Jags against the Jets and quarterback Blake Bortles disappointed once again. Running back Leonard Fournette has adjusted to the professional game well, but he needs some help.

Last week it was said that the Rams had to prove themselves against the Cowboys to make people sit up and take notice. I have sat up and I am taking notice and a victory over Seattle this week will lead plenty of people to conclude that the tide has indeed turned.

26 Cincinnati Bengals (up one)
Record: 1-3
Last week: Won 31-7 at Cleveland
This week: Three-point favourites at home to Buffalo

The first win finally arrived for the Bengals, but they have to convince against other teams than the hapless Browns. It is a key game for them this week as a win over the Bills would give them the chance to regroup during their bye week, but being 1-4 with four of their following five games away from home would leave them in a right pickle.

Andrew Luck? Has anyone seen Andrew Luck? The Colts quarterback has returned to practice but it could be three weeks until he is back playing. If their defeat to Seattle is anything to go by, by that time the Colts' season could be over.

Another close defeat for the Chargers who could have had three wins under their belt. Perhaps it says something about their mentality that they cannot get over the line in tight games. They need to win this week as their following three games are divisional clashes against Oakland and Denver, and a trip to New England. Ouch!

So, we are about to enter the Mitchell Trubisky era in the Windy City. Let's hope he gets more of a run than Mike Glennon did. The Bears have been confused at quarterback since the draft and running back Jordan Howard will probably have a key role to play with a new man under centre. They are best watched for the time being.

Two wins out of two and the Jets are in serious danger of not getting that first-overall draft pick. A trip to Cleveland should hold no fears for them and maybe they are not the sitting ducks plenty of people predicted they would be after all, even with veteran former Brown Josh McCown at quarterback.

Head coach Kyle Shanahan was the offensive supremo at Atlanta last season, a team who averaged more than 34 points a game. So how come his team have prevented two teams from scoring a regulation-time touchdown and still haven't chalked up a win? Surely it has to get a bit better.

Back in what many people think is their natural home. Already some Browns followers are discussing whether now is the time to concentrate on next season. Again. A debut for number-one pick Myles Garrett after injury should help, but defeat against the Jets should not be contemplated.