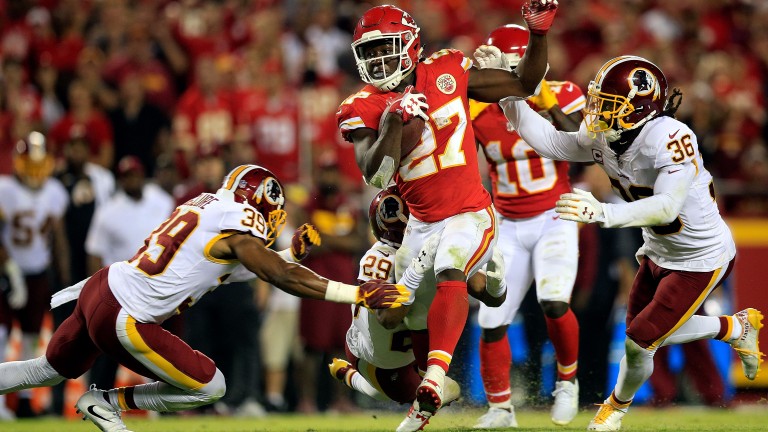 Kareem Hunt has been in great form for Kansas City
Getty Images
1 of 1
By Ian Wilkerson UPDATED 8:53PM, OCT 7 2017

Kansas City head into Week Five as the only unbeaten team in the NFL and they have been the punters' friends too, having covered the handicap in each of their four outings.

They have not looked back since beating Super Bowl champions New England on the opening night, but the same can be said of Houston, whose 29-7 Week One defeat to Jacksonville seems like a distant memory.

The Texans were unlucky not to beat the Patriots themselves and the big story has been the rise of rookie quarterback Deshaun Watson, who has seized his early opportunity.

He threw five touchdown passes and ran for a score himself in last week's stunning 57-14 success over AFC South rivals Tennessee. Houston's defence has been strong for a while, but Watson may be the missing piece of the jigsaw who solves their offensive woes.

It will not be easy against the Chiefs, who have a strong defence, a quarterback in Alex Smith who looks at the top of his game and their own rookie superstar Kareem Hunt, the league's leading rusher.

However, the Texans had the league's top-ranked overall defence last year and can put pressure on the Chiefs' running and passing games.

It will then be up to Watson to rise to the occasion and his confidence must have been boosted by his excellent display last week.