Champions are equipped for a repeat success

Titans are emerging force in AFC 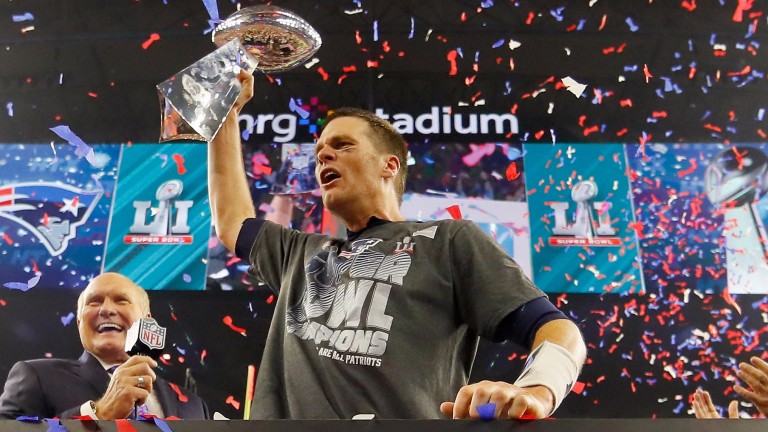 That's only just over half of a Premier League football campaign and you have hardly started when completing that number of fixtures in an 82-game NBA term or the 162-match marathon that is Major League Baseball.

But so much can happen in the relatively short amount of time it takes from the outset of the NFL year to crowning a Super Bowl champion that there is plenty of scope for pre-season favourites to fall flat on their face or the apparently dead-and-buried to claw their way back into contention.

Last year, Oakland were going along merrily and seemed on the cusp of their first Vince Lombardi Trophy only for star quarterback Derek Carr to break his leg.

Meanwhile, Green Bay lost six of their opening ten games but got the wind in their sails and reached the NFC Championship game.

You don't need that long to dig your way out of trouble or see your hopes crash. It's a temperamental game.

So should Super Bowl champions New England be as short as 4-1 to complete the campaign unscathed and become the first team to claim back-to-back Vince Lombardi Trophies since they did it themselves in 2005?

Frankly, yes, they should be that short and they still represent good value to be celebrating another success in Minnesota on February 4.

Greater deficits have been overturned than the 28-3 the Patriots overcame in the Super Bowl against Atlanta in February, but it will go down as the game's greatest recovery due to the stage on which it took place.

It is not just the relative ease with which New England win their division - they have been AFC East champions in 13 of the last 14 years - that puts them in a commanding position.

They have won at least ten of their 16 regular-season matches every year since 2002 and a strong argument can be made that the team who lost just two games last year are even stronger now.

Quarterback Tom Brady missed the first four games of last season through suspension, which included a 16-0 defeat to Buffalo, and they have no such concerns this year.

They suffer the early blow of seeing Brady's favourite receiver Julian Edelman suffer a season-ending knee injury, but the big news is that Rob Gronkowski, the best tight end in the game by a mile, is fit again and ready to go after missing half of the last campaign.

And wide receiver Brandin Cooks arrived from New Orleans in a trade that gives Brady a dangerous new weapon.

A defence who conceded an average of just 15.6 points per game - more than two points better than any other team - has also been boosted by the signing of cornerback Stephon Gilmore from Buffalo, who will give them a bigger physical presence in the secondary.

They will face potentially difficult trips to Tampa Bay, Denver, Pittsburgh and a showdown with Oakland in Mexico City, and the Falcons will have revenge in their nostrils when they head to Foxborough in Week Seven.

But they should still have enough to claim home advantage for the playoffs and that should help them on their way to a sixth Super Bowl triumph under Bill Belichick.

Next best
Atlanta 16-1
While the ticker tape descended on the NRG Stadium after the Patriots' momentous recovery, everyone associated with the stunned Falcons will have been left in a state of despair.

Some doubt whether Dan Quinn's team will be able to recover from the shock and even seven months later be fully focused on the task of going one better this time.

Although they have to fight their way through a potentially tough NFC South division where Carolina will equally want to prove their doubters wrong and Tampa Bay are emerging into a real force, the Falcons could find last year's memories are their biggest hurdle.

If that is the case, quotes of 16-1 about them claiming their first championship could prove generous.

Their offence was immense last season and there is no reason to believe it will not be again, despite the departure of coordinator Kyle Shanahan.

Matt Ryan is a top quarterback, Julio Jones is one of the most feared receivers in the league and the running-back duo of Devonta Freeman and Tevin Coleman are a potent force.

Their pass-rush should be improved and they looked geared for another dominant season which could this time have a happier ending.

Other selection
Tennessee 40-1
It is feasible that we could have a repeat of February's epic climax, but there is another team in the AFC who are heading in the right direction and are a hefty each-way price for glory.

Tennessee are the strongest side in what otherwise looks a weak AFC South and the Titans have a lot of the required elements in place to have a successful season.

Marcus Mariota is turning into an excellent quarterback and he has some decent new receivers in rookie Corey Davis and former Bronco Eric Decker.

The strength of their offensive line suggests running back DeMarco Murray can have another successful season, while their defence can be relied upon against both the pass and the run.

The Titans showed they are no respecters of reputation when they scored 47 points against Green Bay in Week Ten last year.

A 9-7 record was not enough to earn them a playoff berth but they look set to improve and claim the divisional crown.

Others to note
Green Bay are second favourites for the Super Bowl but Aaron Rodgers had to drag them out of trouble last year and the quality of their running game, which will not be helped by key departures on the offensive line, suggests they are short enough.

The quality of Pittsburgh's attacking options suggests they should have a good season if Ben Roethlisberger, Le'Veon Bell and Antonio Brown can avoid injury, while Oakland look another improving AFC powerhouse.

Seattle still have all the defensive resources to make them a force but their offensive line is poor, while Dallas quarterback Dak Prescott is no longer an unknown quantity after his excellent rookie season.

Kansas City and Denver could have quarterback issues and the same applies to Houston, possessors of arguably the toughest defence in the league.

Tampa Bay should push Atlanta all the way in the NFC South, while a substantial improvement is likely from Cleveland, who claimed just one victory last term.