All 32 teams listed from best to worst 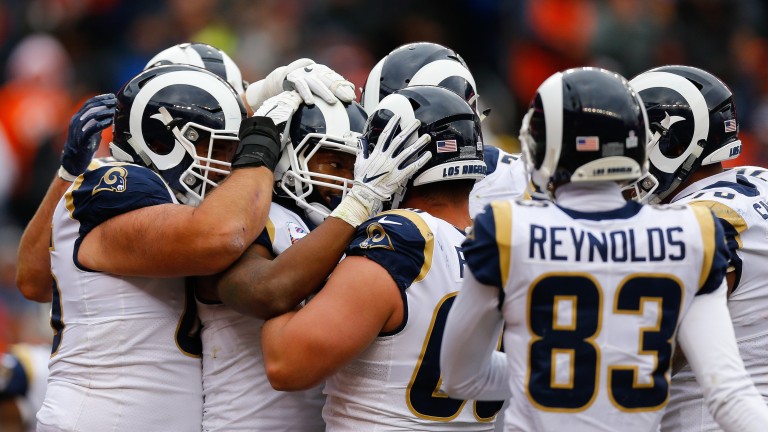 The Rams' victory at Denver was not by a convincing scoreline but they eased up after taking a 20-3 lead. The league's only unbeaten team have to stay at the top of the rankings.

2 New England Patriots up one
Record: 4-2
Last week: Won 43-40 at home to Kansas City
This week: Three-point favourites at Chicago

Yet again the Patriots came out on top in a game where they had to demonstrate their credentials. Their two early defeats have proved to be just the wake-up call they needed.

3 Kansas City Chiefs down one
Record: 5-1
Last week: Lost 43-40 at New England
This week: Six-point favourites at home to Cincinnati

Scoring 40 points in a defeat on the road demonstrates just how powerful the Chiefs offence is and they look destined to remain a factor if they have good fortune with injuries. Their loss at Foxborough should not prove a huge setback and the pair could easily face off again in the AFC Championship game.

The Cardinals are not the strongest opposition but the Vikings built on their victory over Philadelphia and can be expected to push on in the race for the NFC North title.

The Ravens are ticking along nicely in the AFC North, which looks like being one of the season's most hotly contested divisions. Keeping your opponents off the board is always a confidence booster and if they can hold the Saints' rampant offence this week, they would be considered a real force.

Life has been great in the Big Easy in the run-up to their Week Six bye. Their clash against Baltimore will be intriguing and one they have to pass if they are to be considered genuine contenders.

The Jags just can't get going at all and their thumping at Dallas was a disaster. Fingers can be pointed at familiar target Blake Bortles, but their defence have to look at themselves as well after last week. Maybe a big divisional clash is just what they need.

The Eagles needed a victory after two narrow defeats, although the Giants have been struggling. The champions' start hasn't been ideal, but it hasn't been terrible either and there is scope for further improvement.

The Chargers' two defeats have come against the Chiefs and the Rams and they were excellent against a good defence in Cleveland last week. They are just one win behind Kansas City in the AFC West and the immediate future looks bright.

10 Carolina Panthers down one
Record: 3-2
Last week: Lost 23-17 at Washington
This week: 4.5-point underdogs at Philadelphia

Defeat against underrated Washington was a blow especially as they have tough games against Philadelphia, Baltimore and Pittsburgh in the next four weeks. Some good results from those three games would provide a positive outlook.

They got the better of the 49ers with some late Aaron Rodgers magic, but there is still little to get excited about if you have backed the Packers to win the Super Bowl. Their bye week may have come at the right time, especially with their star QB battling his way through a knee injury and fit wide receivers thin on the ground.

The Falcons gained a valuable divisional win, but losing running back Devonta Freeman to injury was a big blow. They can ill-afford setbacks in the tough NFC South but another success against the poor Giants could give them a lift.

Everyone in the AFC will have noticed that the Steelers have won three of their last four games, so don't write them off just yet. Le'Veon Bell's contract holdout is rumbling on but maybe they will be able to put it to one side.

There is so little to separate the teams ranked from ninth to 14th that the Bengals are unfortunate to have fallen so low after their defeat to the Steelers. A trip to Arrowhead will be a good test of their mettle.

A late score put some gloss on the Broncos' defeat to the Rams and they covered the handicap for the first time this season. The offence is still struggling with quarterback Case Keenum failing to hit the heights he did at Minnesota.

16 Washington Redskins up two
Record: 3-2
Last week: Won 23-17 at home to Carolina
This week: 1.5-point favourites at home to Dallas

Bouncing back from a thumping against the Saints with a decent win over Carolina demonstrated their inconsistency. But that means they are perfectly at home in the NFC East and remain at the top of the tree.

Two straight home wins have given the Jets a .500 record, which is not too bad after six matches. The Vikings will be strong but they are going well enough.

18 Chicago Bears down one
Record: 3-2
Last week: Lost 31-28 at Miami
This week: Three-point underdogs at home to New England

The Bears are more than halfway towards eclipsing their win total of last year and they only lost in an overtime thriller against the Dolphins. However, after this week's tough test, upcoming clashes with the Jets, Buffalo and Detroit should hold few fears so better days could be ahead.

Quarterback Ryan Tannehill was injured but the Dolphins still got over the line in a cracking games against the Bears. Maybe they will be better than a 8-8 team, but they won't want to rely on Brock Osweiler at QB for long.

A poor defeat to the Bills was followed by being shut out against the Ravens, rather wasting what they achieved with their valuable divisional victory over Jacksonville. Their offence needs to fire at Wembley to keep up with the explosive Chargers, who are looking the part.

The NFC East looks set to be the usual titanic battle this season and it should help the Cowboys to keep their feet on the ground that they have a game against Washington after such a thumping win last week. If they can get their passing game going, they could soon be shooting up the list.

Expectations are hardly sky high in Seattle as the team appears to be in transition but they will be pleased to have won their last game before their owner Paul Allen died on Monday. Their long-term future is more uncertain now but they look likely to finish second in the NFC West this year. It's difficult to see them forcing the issue against the rampant Rams, though.

There have been some better times this season for Cleveland, who were winless last year, but the Browns were brought back to earth with a bump by the Chargers and their wide receiver injury list is mounting. There is still plenty of work to do and their game against the Bucs could be interesting.

No team have passed the ball for more yards in the opening six weeks of the season than the Bucs, but it is difficult to see them remaining competitive if their defence can't do their bit. They have conceded 30 or more points in four of their five games.

The Lions have had a week off and their victories over New England and Green Bay appear not to have gone unnoticed. They can't take their foot off the pedal though in a competitive NFC North.

A pick-six of much-maligned Bills QB Nate Peterman meant the Texans rode their luck to claim a win over Buffalo but their start may not have been as bad as first pictured. They can still get in the hunt in the AFC South but their meeting against the Jaguars is key.

Scoring 30 points will have given the Niners a lift as they cope with the loss of quarterback Jimmy Garoppolo, but they have plenty of work to do. Having the Rams drop in for a visit probably isn't ideal.

Quarterback Eli Manning's days look to be numbered at the MetLife and it is difficult to see the Giants making much of an impact. Star receiver Odell Beckham has hardly been subtle in expressing his frustrations and that can't bode well either. They might just fall far enough to get another shot at a new quarterback in the draft, having passed up the chance to take one this year.

Defensively, the Bills are looking good, but they couldn't look much worse offensively. There has been enough to suggest, though, that the campaign is far form being a lost cause. Veteran Derek Anderson takes over at quarterback this week with Josh Allen injured.

Only Buffalo have a lower average number of points scored per game and the offence have claimed the fewest yards in the opening six weeks. It's plain where they need to improve and new quarterback Josh Rosen is having to learn fast.

31 Indianapolis Colts up one
Record: 1-5
Last week: Lost 42-34 at New York Jets
This week: 7.5-point favourites at home to Buffalo

The Colts move up one place by virtue of getting 34 points on the board against the Jets. They still look a way behind their rivals, even in the mediocre AFC South.

32 Oakland Raiders down one
Record: 1-5
Last week: Lost 27-3 against Seattle at Wembley
This week: Bye

A miserable result at Wembley and talk of a fire sale at the Raiders. The Jon Gruden revolution seems to have reached the second stage already and it is difficult to see them making much headway this term.