Bet on Drew Brees for most passing touchdowns 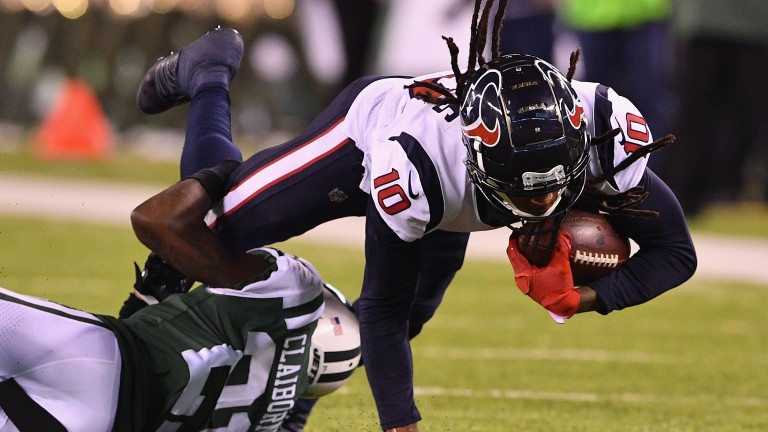 DeAndre Hopkins has had a great season for the Houston Texans
Getty Images
1 of 1
By Andrew Wilsher 8:00PM, SEP 4 2019

DeAndre Hopkins has been the star of the show in Houston for a number of years and could light up the league this season.

With running back Lamar Miller out for the season head coach Bill O'Brien could rely even more on his top receiver, and Hopkins was not far off the pace for most receiving touchdowns last year, finding the endzone 11 times, which was only four fewer than Antonio Brown.

It can be argued that the return of Will Fuller could take opportunities away from Hopkins but it is also another high-profile player defences will need to be aware of.

Another player well worth considering in this market is LA Chargers receiver Mike Williams.

The 24-year-old had a quiet season after returning from a back injury in 2017, but last year he caught the eye with ten touchdowns from just 43 receptions.

The Chargers are likely to be trigger-happy once again with Philip Rivers under center and running back Melvin Gordon holding out, and Williams is too big a price to ignore.

At the age of 40, Drew Brees remains as good as ever and come January the quarterback could lead the league in passing touchdowns.

The signal-caller hasn't topped the charts since 2012 but he has won it four times previously and has a range of top talent at his disposal.

Michael Thomas should continue to work well as his top receiver, but Ted Ginn and Jared Cook are all proven endzone threats and the option to pass to running back Alvin Kamara should not be underestimated.

Patrick Mahomes is the obvious market leader after racking up a record 50 passing touchdowns, but it is unlikely he replicates that number and Brees has the tools to run him close.

Carolina running back Christian McCaffrey really came into his own last season, and considering he is as dangerous in the passing game as he is in the run, he could top the standings for most overall touchdowns scored.

The Panthers star scored 13 times last year, eight behind leader Todd Gurley, but has continued to improve and physically looks better than ever.

Gurley and Saquon Barkley are likely to be his biggest rivals in this market, but there are questions over the health of Gurley's knee and the Giants may not have enough firepower for Barkley to score enough.

A small wager on Sam Darnold throwing the most interceptions looks a big price.

The Jets quarterback was notorious for them in his college days and the pressure could force mistakes in his second season.