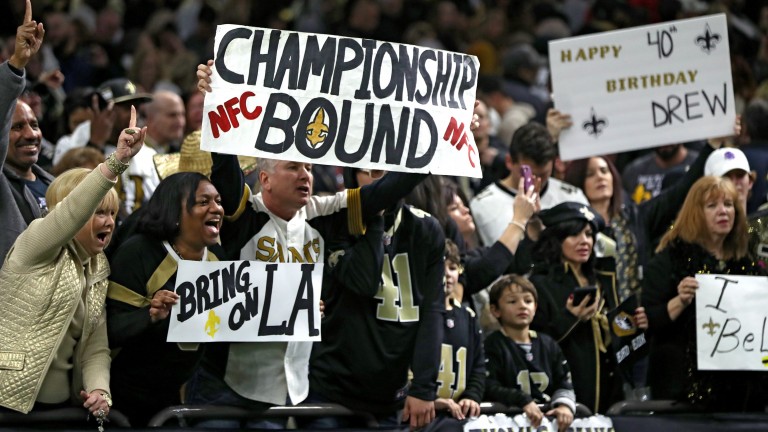 New Orleans Saints are 15-8 favourites for the Super Bowl after surviving a scare against outgoing champions Philadelphia Eagles to reach the NFC Championship game.

The Saints host the 15-4 Los Angeles Rams, a dangerous team to be outsiders in a top-quality field of four. Kansas City Chiefs are 11-4 with their AFC rivals New England Patriots 7-2 shots.

All eight teams who took part in Wildcard weekend have been eliminated as the top two seeds in each conference progressed with the help of a week off and home advantage.

Both championship games - and the Super Bowl line-up they produce - should be crackers. In the AFC, New England's legendary combo of head coach Bill Belichick and QB Tom Brady are underdogs as they visit Andy Reid's Kansas City and their prolific offence led by second-season sensation Patrick Mahomes.

The earth should tremble as NFC powerhouses LA Rams, under the guidance of the game's hottest young brain Sean McVay, visit New Orleans, led by the savvy veteran QB Drew Brees. The Saints are early 3.5-point favourites despite having had the toughest examination of all four surviving teams in the divisional round. 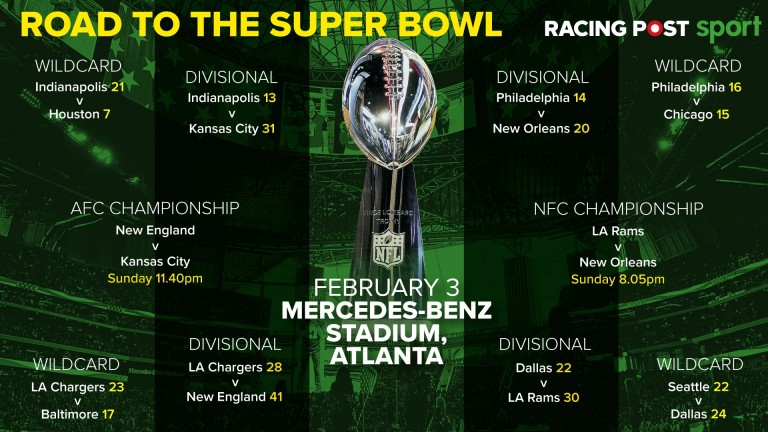 Championship round fixtures: Rams at Saints and Patriots at Chiefs
RP Graphics

Divisional round game summaries
Indianapolis 13 Kansas City 31 The Colts were supported to cause an upset in this one but their challenge faded tamely against the high-powered Chiefs offence. The Kansas City defence showed more fire than they have for much of the season, which is a welcome sign for their supporters.

Dallas 22 LA Rams 30 The Rams were always in control thanks to a powerful ground game and had established a 16-point lead early in the third quarter.

LA Chargers 28 New England 41 The Patriots blew away the Chargers with an awesome first-half display, leading 35-7 at half-time before cruising home. However. they are underdogs for a playoff game for only the second time since 2007 as they hit the road to face the Chiefs.

Philadelphia 14 New Orleans 20 The divisional round saved the best for last with a full-throttle encounter in which the 2018 Super Bowl champions Philadelphia raced into a 14-0 lead. Veteran QB Drew Brees steadily steered the Saints in front before a drop by Eagles wide receiver Alshon Jeffery foiled another comeback bid by QB Nick Foles and led to a game-ending interception.

Star of the week
CJ Anderson is on his third team of the season after being overlooked and released by Carolina and quickly cast aside by Oakland. But the former Bronco was a key man for the LA Rams as he and fellow running back Todd Gurley both passed 100 rushing yards against the Cowboys. Anderson registered 123 yards and two touchdowns.