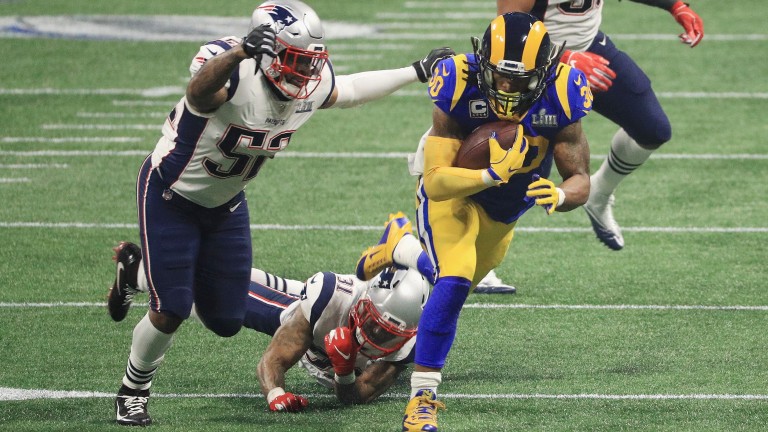 Running back Todd Gurley will be a key player for the Los Angeles Rams
Getty Images
1 of 1
By Ian Wilkerson 8:15PM, SEP 4 2019

There is little surprise to see the Rams at long odds-on prices to claim the NFC West crown and neither is it a shock to see Arizona such heavy favourites to be bringing up the rear.

The Rams' performance in the Super Bowl would have provided much food for thought over the off-season in Los Angeles but it is hard to argue against the theory that they have one of the most talented squads in the NFL.

They should come out on top of a division which could prove too competitive for the Cardinals, who are looking to recover from a campaign to forget under a new coach and a rookie quarterback.

There may not be much to choose between Seattle and San Francisco, who are capable of having decent seasons.

The scope for improvement looks greater at the Niners, if they can get off to a decent start, which hasn't happened in their last two season under Shanahan.

Injuries played a huge role in them winning just four games last term and it is worth chancing that they can be the team who give the Rams most to worry about.

Verdict The only way is up for a coach in his first NFL season and the Cardinals need number-one pick Murray to spark an offence that was bottom of the charts both through the air and on the ground. It could prove a long, drawn-out process in a tough division, although four home games in the opening six weeks may help him settle. A fitter offensive line should help but merely recording a respectable win tally should be their primary target.

Verdict The Rams' 2018 season was pretty faultless until it got to the big one and everything fell apart against the Patriots in the Super Bowl. However, they still have one of the best all-round rosters in the league and one of the game's brightest coaches directing operations. Defensive guru Wade Phillips is also a massive asset. Keeping Gurley fit will be key and it is difficult not to see them making another charge for the big prize.

Verdict The Niners finished 2017 in fine fettle and hopes were high last term before injuries to Jimmy Garoppolo and Jerick McKinnon stopped them in their tracks. The defensive line has plenty of depth and there are high hopes for Nick Bosa. Even better things can be expected of tight end George Kittle, who was a revelation last season. Improvement has to be on the cards as they search for their first Super Bowl success for 25 years.

Verdict There were plenty of changes at the Seahawks before last season, but they performed well to claim a playoff berth, helped in no small part by their excellent running game in which Chris Carson flourished. They won six of their final seven regular-season games before surrendering a fourth-quarter lead against Dallas in the wildcard round, and they are set to prove difficult opponents for whoever they face.