Neymar all the rage as Three Lions jet out to Russia 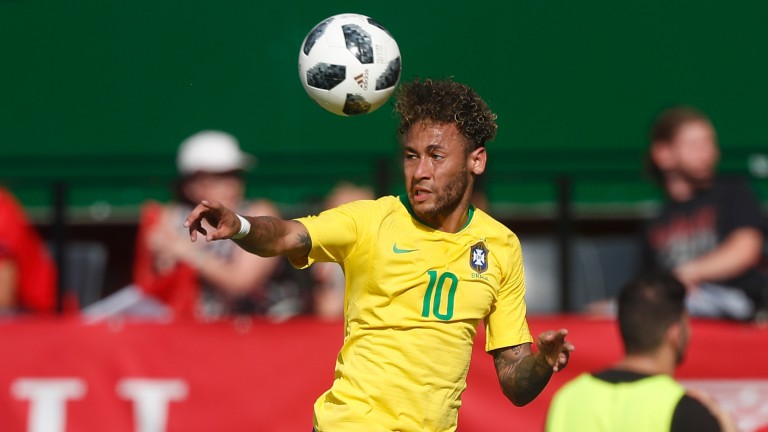 Brazil talisman Neymar confirmed his fitness with a goal against Austria on Sunday
Laszlo Balogh
1 of 1
By Steve Davies 6:28PM, JUN 11 2018

Neymar continues to be well backed to take top goalscorer honours at the World Cup after proving his fitness – and confirming his scoring prowess – in Brazil’s final warm-up match at the weekend.

The 26-year-old played 84 minutes and scored his 55th international goal in Sunday’s 3-0 win over Austria.

It was Neymar’s first start since February after a foot injury – he was a scoring substitute against Croatia at Anfield last week – and his performance impressed layers and punters alike.

Hills and Betfred cut him to 8-1 in their top scorer markets while bet365 trimmed the Brazil star into 9-1 from 10-1.

England fly out to St Petersburg this afternoon carrying an 18-1 outright quote on their shoulders. Their first Group G game is against Tunisia in Volgograd on Monday, with the Three Lions a 2-5 chance to open their account with victory.

Bespoke bet requests are proving popular at this World Cup with Betway revealing some of the more intriguing ones they’ve been asked to price up. Among the saner wagers is 7-2 that all 32 teams score in Russia, a bet that would have copped four years ago.

The Blue Samurai are a group close to crisis who, according to former coach Philippe Troussier, wouldn’t reach the last 16 in Russia if they were managed by Jose Mourinho. Instead they are managed by Akira Nishino, appointed in April and whose first two games in charge have ended in feeble 2-0 losses to Ghana and Switzerland.

The Paraguayans, who would be in Russia but for a shock 1-0 home defeat by bottom side Venezuela in the final round of Conmebol qualifying, are 2-1 to give their veteran cat a winning send-off.

Problems for Japan are being mirrored by their Asian rivals South Korea, who suffered a dispiriting 2-0 defeat at the hands of Senegal in a behind-closed doors friendly in Austria on Monday.

Defender Young-Gwon Kim put through his own net before Moussa Konate doubled the African side’s lead from the penalty spot in injury time.