Next Gen ATP Finals tournament betting preview, free tips and where to watch 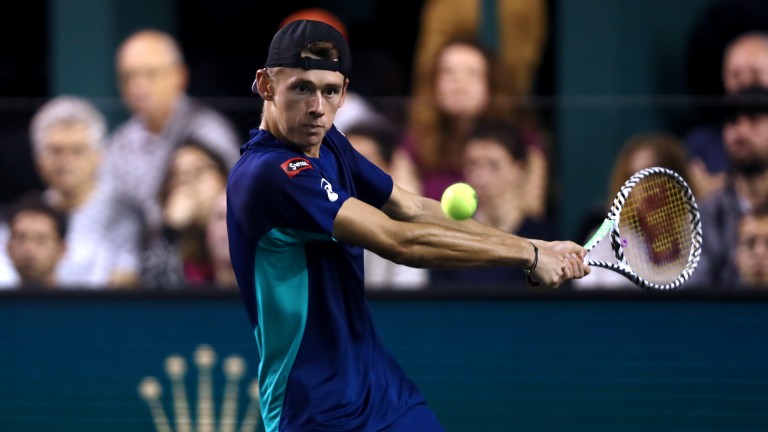 Alex de Minaur keeps his eye on the ball in the Paris Masters last week
Dean Mouhtaropoulos
1 of 1
By Adrian Humphries 6:30PM, NOV 4 2019

It's not difficult to see why Jannik Sinner is so well respected by the oddsmakers for the Next Gen ATP Finals in Milan.

The Italian teenager has shown he can be an awkward opponent for many players and while the rankings suggest he should be the rank outsider for the third Next Gen Finals, the betting says otherwise.

Bookmakers are struggling to find a favourite for Group B out of Frances Tiafoe, Ugo Humbert and Sinner.

But while Tiafoe's experience should afford him a slight advantage over some of his rivals this week, the American is far from certain to rule the roost against Humbert, who is already a decent performer, Sinner and promising Swede Mikael Ymer.

But while the deceptively strong Antwerp semi-finalist Sinner could boss his section, unsurprisingly the money has already been pouring in for title favourite Alex de Minaur.

The Australian, runner-up to Stefanos Tsitsipas in Milan last year, opened at 11-4 to go all the way this week but those odds were smashed into.

De Minaur ought to do the business – he's ranked a lofty 18th while the second seed Tiafoe is down at 47th in the latest ATP chart.

But it's a slight concern that De Minaur has a winning record against none of his section rivals and trails 2-0 against the physically strong Miomir Kecmanovic, who could prove a danger to anyone, and 1-0 against Alejandro Davidovich Fokina, a late replacement for Denis Shapovalov who may also cause problems for opponents.

De Minaur has enjoyed a fine campaign and recently added the Zhuhai title to ones collected in Sydney and Atlanta.

But while he started well enough in last year's tournament, he needed five sets to pip Jaume Munar in the semis.