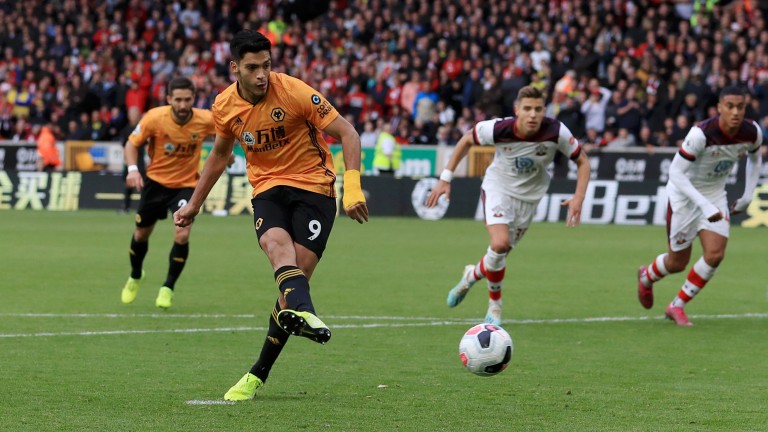 Raul Jimenez's Wolves can cause problems for Newcastle United in the Premier League
Matthew Lewis
1 of 1
By Mark Langdon UPDATED 6:45PM, OCT 26 2019

Newcastle
Andy Carroll and Fabian Schar are sidelined for Newcastle because of injury and Isaac Hayden is suspended. Matt Ritchie returns and Florian Lejeune is also close to a comeback.

Wolves
Ryan Bennett's groin injury could keep him out and Pedro Neto is injured. Willy Boly is reportedly out, while Wolves have confirmed Benny Ashley-Seal has travelled to Tyneside.

Wolves showed during the last round of matches following continental action that the Europa League workload was no handicap to them as they landed an away success and they can repeat the trick by overcoming Newcastle at St James' Park.

On the previous occasion it was a remarkable 2-0 success at Manchester City that followed Wanderers' trip to Besiktas and this time Nuno Espirito Santo's side are aiming to back up their 2-1 triumph at Slovan Bratislava on Thursday.

Nuno has a small squad to work with but he is rotating his players as much as he can and slight variations in his formation enable him to get more out of the pool of players than perhaps the numbers would suggest.

Ruben Neves, Diogo Jota, Adama Traore, Jonny Castro and Leander Dendoncker were among those who failed to start in Bratislava and could be in line for recalls as Wolves go in search of a third Premier League victory of the campaign.

Draws have held Wolves back to some extent - they have split the points on five occasions - and it makes sense to at least save stakes on another stalemate just in case Nuno's men are frustrated.

Forcing the issue does not come easy to Wolves but in Raul Jimenez they clearly have the best forward on the pitch and if they can remain solid it is difficult to see where Newcastle's attacking threat will come from.

Newcastle have not scored more than once in any match this season and their two biggest signings both have questions to answer.

Miguel Almiron has not scored for the club since arriving from America in January and summer signing Joelinton's only goal came in the shock 1-0 success at Tottenham in August.

There are calls for Dwight Gayle to be given a shot in the final third, particularly with Andy Carroll injured again, but whoever plays as the striker will find it difficult because Newcastle are creating so few chances.

The Longstaff brothers are full of midfield endeavour and Matty's long-range effort was enough to see off Manchester United in Newcastle's last home match as the Magpies once again showed an appetite for beating the bigger clubs in the division.

However, the onus will be on them to force the issue at home to Wolves and they lack the quality to hurt opponents, while Fabian Schar's injury robs United of their most consistent defender.