India had been 1-6 to progress after Kiwi innings 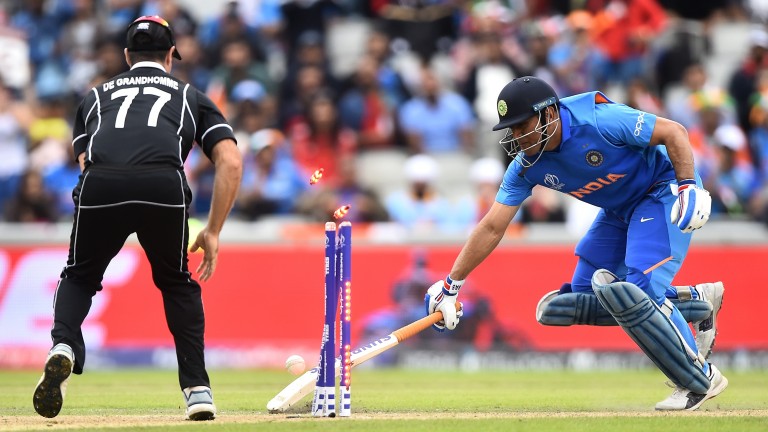 MS Dhoni is run out by Martin Guptill's throw as India slipped to defeat
Nathan Stirk
1 of 1
By James Milton UPDATED 2:15PM, JUL 12 2019

For the second World Cup in a row, New Zealand held their nerve to win a thrilling semi-final and the Black Caps are 2-1 to lift the trophy following a dramatic 18-run victory over India at Old Trafford.

After rain disrupted play on Tuesday, New Zealand returned to finish their innings on Wednesday's reserve day. The Kiwis, 11-4 outsiders before the toss, reached 239-8 from their 50 overs as number four Ross Taylor top-scored with 74.

India, who had been 13-8 trophy favourites before the semi-finals, were just 1-6 to chase down that target at the midway point of the match with New Zealand out to 5-1.

Within 3.1 overs, however, India's batting was in tatters as Matt Henry dismissed openers Rohit Sharma and Lokesh Rahul for one run apiece and Trent Boult claimed the key wicket of Virat Kohli, also for a single.

India were 5-3 at that point, and 24-4 after ten overs, but Rishabh Pant (32) and Hardik Pandya (32) steadied the ship before a century stand between Ravindra Jadeja and MS Dhoni set up a nerve-shredding finale.

They were trading at 5-2 after Dhoni hit the first ball of Lockie Ferguson's stanza for six but the former skipper was run out by a Martin Guptill direct hit off the third ball and New Zealand hit 1-100 in-play.

Ferguson and Jimmy Neesham wrapped up the last two wickets to send the Kiwis into Sunday's final at Lord's.

Kane Williamson's men, 11-1 ante-post, were still 9-1 at the start of the semi-finals, having scraped through to the last four despite losing their last three group games.

India, 100-30 second-favourites behind England in the ante-post betting, had been 2-1 to lose in the semi-finals at the start of the tournament.

Sharma, a 9-2 chance, finished as their leading runscorer, having made a record five centuries, and 11-4 favourite Jasprit Bumrah was their top wicket-taker with 18.

Sharma remains top of the tournament runscoring chart – he had been 16-1 ante-post to be the most prolific batsman – but he is just ten runs ahead of Australia's David Warner, who faces England in Thursday's second semi-final.

England are 11-8 to win the World Cup with Australia 9-4 but whoever comes through their clash at Edgbaston will be wary of New Zealand after their heroics at Old Trafford.