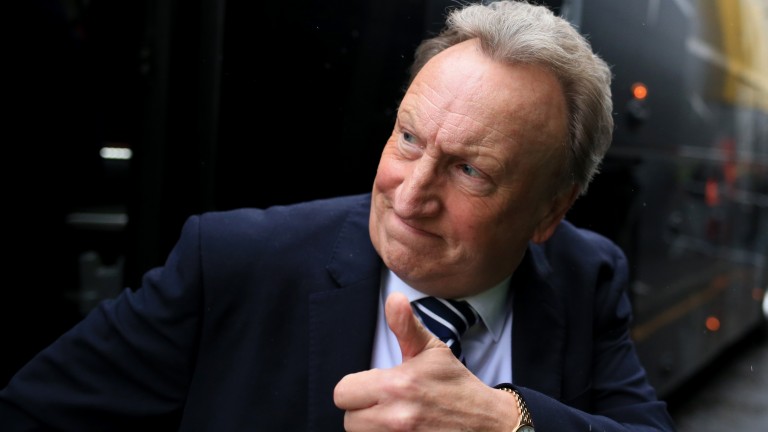 Commuting from Cornwall to Middlesbrough is no issue for Neil Warnock
Marc Atkins
1 of 1
UPDATED 2:48PM, JUN 25 2020

The return of English football has been a welcome sight despite the nagging sense that something essential was still missing.

This week, though, that void has been filled by the announcement that Middlesbrough have parachuted in Neil Warnock as a replacement for Jonathan Woodgate in their Sky Bet Championship survival battle.

At the age of 71, the former (sorry, you'll have to look up his CV yourself – I'm working to a tight word count here) manager just couldn't resist the lure of one last heist.

You're never too old to take on a fresh challenge. Warnock, the doyen of the mid-winter, rain-lashed six-pointer, once told a reporter that he relished the "muck and nettles" of the Championship more than the glitz of the Premier League. Now we'll see whether he can do it on a balmy July afternoon in Reading.

This is, perhaps, an appointment for our times. In a moment of crisis, Boro have voted in an uncomplicated, vocal leader with a clear message: Keep Your Shape. Win The 50-50s. Stay Up.

This is a man who can be trusted to 'Get Avoiding Relegation To League One Done'. Cry 'Havoc!' and let slip the dogs of Warnock.

It is fascinating to observe how different generations of football managers coexist and compete with one another.

Some, like Lee Bowyer of Charlton or Fulham's Scott Parker, are forever fixed in my amber-like memory as promising young players.

Others – and the lean, prowling Pep Guardiola comes to mind here – look as though they could still slip on a pair of boots and produce a seven-out-of-ten performance in the midfield engine-room.

But Warnock, along with fellow elder statesmen such as Roy Hodgson, Arsene Wenger and Sven-Goran Eriksson, seems to come from a pure-bred managerial class.

Their umbilical cords came with a coach's whistle attached; their first toy was a stack of training cones; their bedtime stories were about catenaccio rather than Pinocchio.

And for all their experience, these men retain a childlike love of the game. Even in the uncharted territory of a Zoom press conference this week, Warnock oozed enthusiasm and energy.

"I think you need that bit of something on the edge," he explained. "That's what I've missed in the last few months. I do enjoy that thrill, trying to get enough points to help a team keep its head above water."

Asked about the impressive training facilities at Middlesbrough, he chuckled: "I won't tell you exactly what I said to the groundsman but some of the clubs I've been at we've had to shovel certain stuff off the pitch before we start.

Home for Warnock, famously, is Cornwall and you get the impression that he would happily make the commute to Boro daily if it meant staying up on goal difference thanks to a late winner that should probably have been ruled out for a foul on the goalkeeper.

Scratch that – he'd do the journey just for a chance to offer a few words of encouragement and advice to a nervy young fourth official.

The Middlesbrough job is not a straightforward one but that's exactly why Boro have sent up the Warnock Signal with eight games of the season remaining.

They are 4-1 shots to be relegated although, after last weekend's 3-0 tonking at home to Swansea, only goal difference is keeping them out of the bottom three.

As well as being an appointment for our times, in some ways Project Warnock is also a gloriously old-fashioned decision from Boro. Maybe Dave Bassett had already turned them down.

We know all about the data analytics in modern football, the complex nutrition plans, the cryotherapy chambers, and those funny little sports bras that players wear these days.

Cast all that bilge into the Tees, Boro have declared. Get Warnock on t' phone, order him a batch of tight-fitting polo shirts from the club shop, and put aside enough money to cover the fines that will inevitably accrue because, in an empty stadium, the refs can hear every single word he says.

And, for the love of God, somebody clear that pile of "stuff" off the training pitch.

FIRST PUBLISHED 2:44PM, JUN 25 2020
Warnock, the doyen of the mid-winter, rain-lashed six-pointer, once told a reporter that he relished the "muck and nettles" of the Championship