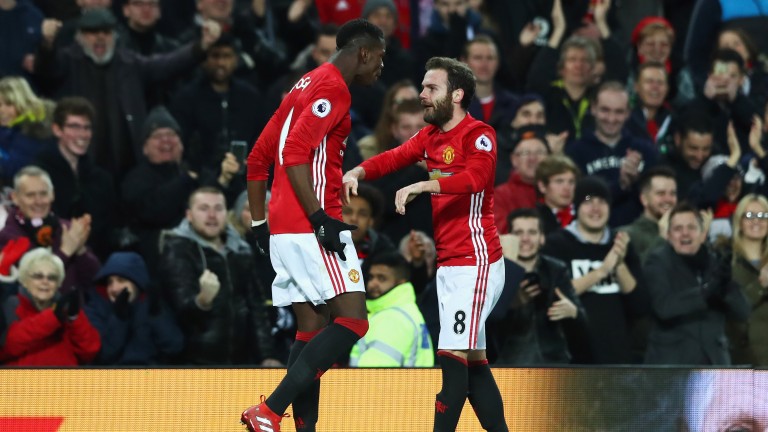 Manchester United made it six straight wins on Saturday and they can continue their fine run of results with another success at West Ham's London Stadium.

It was like the United of old as they staged a late comeback success over Middlesbrough but there was nothing fortunate about the Old Trafford triumph, even though it needed dramatic goals from Anthony Martial and Paul Pogba to seal maximum points.

Jose Mourinho's early-season troubles have disappeared and his big-name signings including Pogba are coming to the boil nicely.

The world's most expensive player made a slow start to life back in England but he finished 2016 with a bang and 2017 is when Pogba is likely to show his true colours at United.

That can start with a man-of-the-match effort at West Ham with the Frenchman 11-2 to play a starring role in what could be a two-horse race alongside 7-2 favourite Zlatan Ibrahimovic, if, as expected by bookmakers, Mourinho's men bag a vital victory.

There is a theory that Pogba tried too hard when he first returned from Juventus as he attempted to justify the huge outlay, although he is now delivering the kind of performances that saw him worthy of the transfer in the first place.

Pogba was the best player on the pitch as he scored in the 2-1 win over Crystal Palace last month and delivered the telling blow against Boro, while at 23 years old the Frenchman is far more likely to relish the rapid turnaround in fixtures than 35-year-old Ibra.

The sensational Swede played the full match against Sunderland last week and in the Boro win but even if Ibrahimovic is not at his absolute best the class of United should tell.

There is a lot to like about the Red Devils, who have lost only one of their last 15 games, apart from the 90-minute price.

They are shorter than the 4-5 Arsenal were being quoted at for their trip to Stratford last month. Yes, the Gunners won 5-1 but even so the visitors cannot be considered tremendous value.

West Ham got a point at Old Trafford in November thanks to an early Diafra Sakho goal and a stunning individual show from goalkeeper Darren Randolph, while it was only last month the Hammers escaped Anfield with a 2-2 draw against Liverpool.

However, Slaven Bilic's team were also trounced 4-1 at United in the EFL Cup, lost the London derby 5-1 to Arsenal and their Premier League home wins this season have come against ten-man Bournemouth, Sunderland, Burnley and Hull.

It will be interesting to see whether Andy Carroll can play again so soon after Saturday's 1-0 loss at Leicester and if both managers feel obliged to make changes it is clear Mourinho has many more options.

Phil Jones, Marcos Rojo, Juan Mata, Jesse Lingard, Bastian Schweinsteiger and Marcus Rashford were on the bench on Saturday, while Bilic's squad options are limited by a stack of injuries.

Team news
West Ham
Skipper Mark Noble came off injured against Leicester and needs to be assessed. Diafra Sakho, Arthur Masuaku, Gokhan Tore, James Collins and Alvaro Arbeloa are out, while Simone Zaha and Reece Oxford are unlikely to figure. Sam Byram is nearing a return.

Man Utd
Eric Bailly has left for the Africa Cup of Nations, while Luke Shaw, Michael Carrick and Wayne Rooney are doubtful. Jose Mourinho said Carrick was more likely than Rooney to be available.

Key stat
Both teams have scored in nine of the last 11 meetings between the clubs.