Moult could be the toast of Motherwell 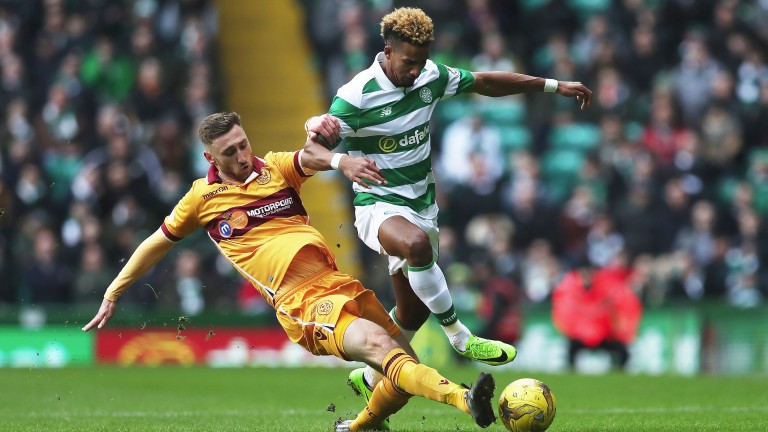 Motherwell can take a giant step towards safety with victory in Saturday's Lanarkshire Derby and plunge neighbours Hamilton into the relegation dogfight in the process.

This has been billed as the biggest ever derby between the two old rivals and defeat for either side could have serious consequences.

Both clubs are desperately trying to avoid a relegation playoff, although it could be even worse if Inverness can somehow secure another win at Kilmarnock.

The pair are extremely weak defensively and have made numerous defensive howlers in recent weeks.

But there is evidence to suggest Well have that extra bit of quality that could make all the difference. And his name is Louis Moult.

The 24-year-old striker’s 17 goals have undoubtedly helped saved the Fir Park club from even bigger trouble and, together with strike partner Scott McDonald, he can help dig Motherwell out of another hole today.

Accies capitulated at Inverness last week and there are signs that they have run out of steam at the worst possible time.

Motherwell have won just once in eight games but Accies have grabbed only two wins in the same period themselves – one of which came against a St Johnstone side who had to play with nine men for 45 minutes.

Well might just have enough within their ranks to grab a crucial New Douglas Park win.

On a tricky card, Airdie can complete the job in their Ladbrokes Championship playoff semi-final tie with Alloa.

The Diamonds were 1-0 first-leg victors on Wednesday and appear to be hitting form at the right time.

As a full-time team, Airdrie should have done much better this season, but their fitness levels may be beginning to tell at the end of the season.

They’ve won three in a row and were dominant in the home first leg against Jim Goodwin’s team.

Midfielders Ryan Conroy and Kyle Hutton took command of the game and they can nail down a chance to return to the second tier with a win at the Indodrill Stadium.

Rangers can build on last week’s smash-and-grab win at Partick Thistle by defeating a toiling Hearts side at Ibrox.

Both sides cannot wait for the season to end after a campaign of severe underachievement.

Rangers’ last-gasp victory at Firhill last week will have at least given them some confidence after two hammerings at the hands of Celtic. But Hearts, under an increasingly bewildered-looking Ian Cathro, look like a rudderless ship after a woeful second half to the season.

They’ve managed only one win in their last seven and that was at home against a Dundee side in freefall.

Rangers are a long way from being a force themselves, but should have too much for a side who have been woeful on the road and must be low on confidence.

Hearts are without John Souttar and Callum Paterson.

Key stat
Hearts have won only three of their 16 away games this season.