Max Verstappen could be in position for fastest-lap tilt 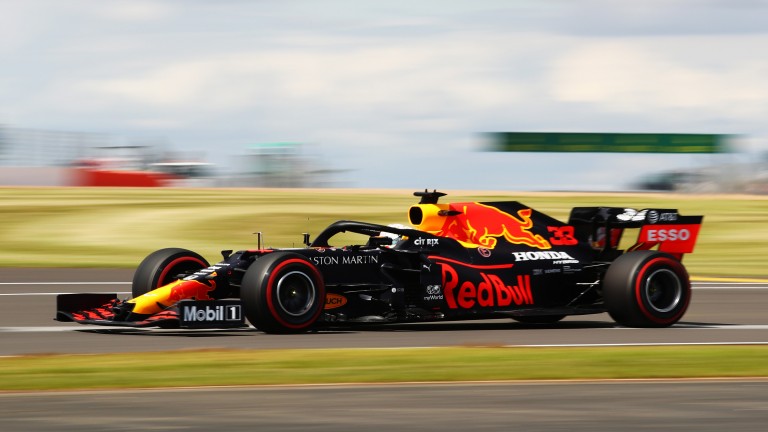 Lewis Hamilton didn’t let a spin into the gravel stop him from grabbing pole position for Sunday’s British Grand Prix.

Hamilton’s Mercedes teammate Valtteri Bottas looked to have the upper hand through the first two segments of qualifying, but the Finn had no answer to the world champion’s last-gasp effort as the pair lapped Silverstone 0.7 seconds faster than Max Verstappen’s Red Bull.

They will start ahead of Charles Leclerc, who is a promising fourth for Ferrari, with Lando Norris a brilliant fifth in the McLaren.

Hamilton is a 2-7 chance to extend his five-point championship lead with a seventh career victory at Silverstone, which also hosts next week’s round of the title chase.

Max Verstappen has been involved in thrilling battles with Valtteri Bottas at the last two grands prix, but it will be a surprise if anyone is able to live with the Mercedes this time.

Verstappen was passed by Bottas in the closing stages of the Styrian Grand Prix, but held off the Finn to claim second place in Hungary last time.

There was yawning gap back to fourth place in Budapest, and Verstappen had enough of a cushion in Austria after being overtaken that he could afford to make an extra stop and try for fastest lap on some fresh tyres.

In the end the Dutchman was outdone by Carlos Sainz, who adopted the same strategy, but Verstappen looks worth a bet to claim the fastest lap of the race.

It could be a dull afternoon for the Red Bull ace, with the Mercedes likely to disappear in front of him as he pulls away from the chasers.

That could well leave him in a position to fit fresh boots for a crack at fastest lap in the closing laps.

It has been a miserable start to the season for Ferrari. They have seen both cars finish in the points in only one race but they look big at 5-6 to manage the feat this time.

Charles Leclerc and Sebastian Vettel collided on the opening lap in the Styrian Grand Prix, while in Hungary Leclerc found himself on the wrong tyres for far too long and finished 11th.

Vettel has not looked happy this weekend but the four-time world champion should have enough to bring the car home in the top ten.

Leclerc produced a heroic lap in qualifying to line up fourth, just a tenth of a second behind Verstappen.

While that almost certainly flatters his machinery the Monegasque surely needs only to finish to score points.

The Prancing Horses, while lacking in pace, have at least proved reliable this season.