Moore to build on Ryder Cup glory with Copperhead triumph 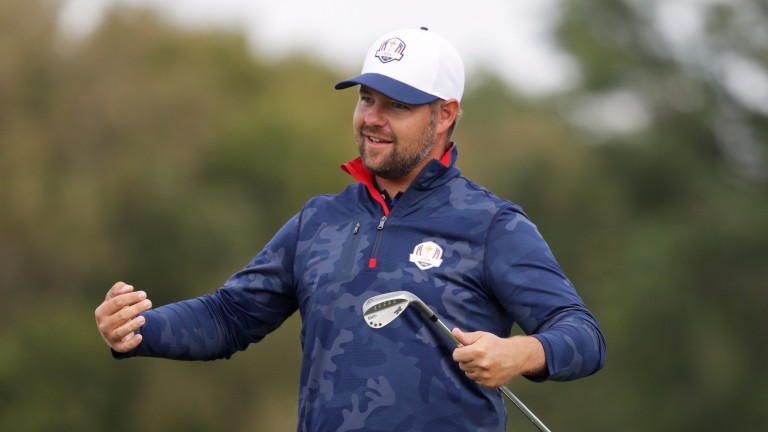 The Ryder Cup was won by Ryan Moore in October, a singles victory over Lee Westwood securing American glory, and Moore has never walked the fairways with more self-belief. Further success could be coming in this week's Valspar Championship.

Moore earned his place on the United States team by pushing Rory McIlroy all the way in the Tour Championship the week before, the culmination of an excellent FedEx Cup playoffs campaign. He then won two points from three matches at Hazeltine to take his career to the next level.

Moore started this year with third place in the SBS Tournament of Champions in Hawaii and a share of 28th spot in elite WGC company in Mexico last week was another decent effort from a player who increasingly believes he belongs at the top table.

Moore has won five US Tour titles, most recently the John Deere Classic last year, and a low-key Valspar Championship represents a tremendous opportunity for a sixth. The Copperhead Course demands accurate driving, which is Moore's strength, and he tied for eighth there on his debut in 2007. In the last two Valspars, Moore has finished fifth and third.

Justin Thomas is tournament favourite with most firms, but it is questionable whether he should be after a disappointing final-round performance in Mexico on Sunday. Thomas is not ideally suited to a tight, tree-lined track like Copperhead, and Henrik Stenson is much preferred.

Stenson withdrew after just 11 holes of the WGC-Mexico Championship, but it was only because of a stomach virus, which means the world number six should be swinging as normal at Copperhead. In fact, heading back to his Florida home three days earlier than scheduled means the Swede should be nicely rested, having missed 61 holes of combat at altitude in Mexico City.

Prior to jetting to Mexico, Stenson spent some time at Lake Nona with his coach, Pete Cowen, getting primed for the start of his US Tour campaign, and that work can bear fruit at Copperhead. Stenson's ball-striking quality makes him a natural for this layout and he has finished fourth and 11th in the last two Valspars.

Stenson finished eighth (Abu Dhabi) and second (Dubai) in his opening two events of the year, having signed off for 2016 with the runner-up spot in the Hero World Challenge, and it would be a surprise should he fail to contend in his adopted home state on Sunday. Stenson won the 2009 Players Championship and can flourish on another tough Florida track this week.

A stiff tee to green test such as Copperhead is exactly what Billy Horschel needs to show off his talents. This greens-in-regulation machine is not a regular Valspar starter, but he is desperate to end a 30-month victory drought and is hungry for competition.

Horschel, a born and bred Floridian who loves teeing up in his home state, was a playoff loser in the RSM Classic at the end of November, and fourth in the Honda Classic last time out with a new caddie alongside him. A bagman switch can often spark positive results and Horschel was second in the strokes-gained tee-to-green stats at the Honda.

Putting is Horschel's bugbear, but it is worth noting he recently reverted to the putter grip with which he won the FedEx Cup in 2014. Evaluating the state of his game on Twitter after the Honda, he said: “Very confident. Have got everything straightened out. Most comfortable I've felt with everything I'm doing in a while.”

Others to note
Charles Howell
The Florida-based swinger was second at Copperhead in 2009. Posted seven top-15 finishes in a row prior to the Honda. Has strong place claims

Cameron Smith
The Australian youngster is excellent from tee to green and is a 150-1 dark horse at a tough layout. Has settled nicely on the US Tour this year

Harris English
The two-time US Tour champ won the Southern Amateur Championship at Copperhead by three shots in 2011, and he has two top-tens to his name in the Valspar

Course overview This is a tough, tree-lined layout, opened in 1972 and hosting for the 17th time (no tournament in 2001). It opens with a double-dogleg par-five, the fifth is an uphill par-five of 605 yards to a small, well-bunkered green, while the 235-yard eighth is the longest of the five par-threes. The most difficult hole is the par-four 16th, where water runs down the right of the fairway. It starts what is known as the Snake Pit – a hugely demanding closing three-hole stretch. The tournament was formerly known as the Tampa Bay Classic, Chrysler Championship, PODS Championship, Transitions Championship and Tampa Bay Championship

Story of last year Charl Schwartzel finished like a train, then edged Bill Haas in a playoff, the South African claiming his only US Tour success other than the 2011 Masters

Weather forecast Hot, sunny and calm for the most part, but a breezy Sunday is expected

Type of player suited to challenge Gary Woodland, the 2011 champion, sticks out like a sore thumb on a Valspar honours board full of steady tee-to-green performers. Copperhead puts a premium on solid driving and straight hitting, which is why the likes of KJ Choi, Retief Goosen, Jim Furyk and John Senden have flourished at the layout