Fallon Sherrock 250-1 to lift the trophy 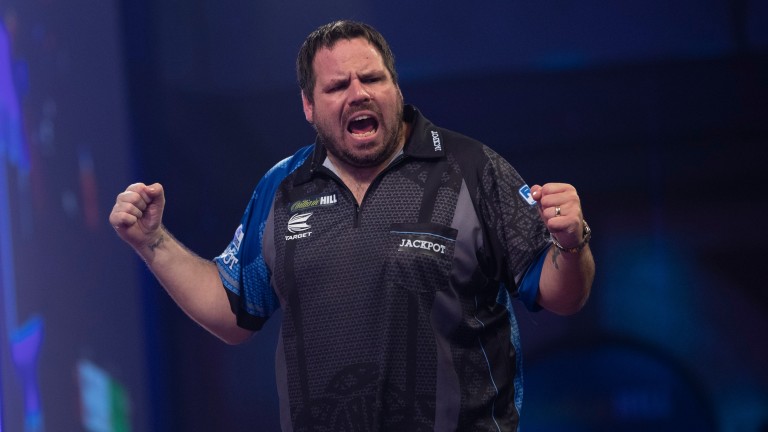 Jackpot could be set to cash-in against Dimitri van den Bergh
LAWRENCE LUSTIG
1 of 1
By Henry Hardwicke 5:04PM, DEC 22 2019

Fallon Sherrock rocked Alexandra Palace on Saturday with a stunning win over 11th seed Mensur Suljovic and now Chris Dobey stands between her and a place in the last 16 of the William Hill World Championship.

Sherrock was 8-1 to beat Suljovic and that victory came after she caused a 10-1 shock against Ted Evetts in the first round. The Milton Keynes star is now a 4-1 shot to beat Dobey on Friday and cause a hat-trick of Ally Pally upsets.

The 2015 BDO Women's World Championship runner-up is now just 250-1 to go all the way and lift the Sid Waddell Trophy having started the event as a 5,000-1 chance.

Paddy Power make it a 14-1 shot that Sherrock is eliminated at the quarter-final stage, 50-1 that she goes out in the semis and they go 150-1 that she is beaten in the final.

Adrian Lewis, Gary Anderson and Peter Wright are the big names in action on Monday's card.

There has been no shortage of shocks at the William Hill World Championship but we are into the longer format best-of-seven-set matches and that should allow the cream to rise to the top.

Nico Kurz has been responsible for a couple of those upsets when beating James Wilson and Joe Cullen, but the young German faces a tougher test against the impressive Luke Humphries.

Humphries averaged 91 in a 3-1 win over Devon Petersen in round one and followed that with an average of nearly 98 in a 3-2 win over the talented Jermaine Wattimena.

Cool Hand Luke is a 4-7 shot to make it through and that looks an accurate assessment of his chances.

Two-time world champion Adrian Lewis hasn't been performing at that level for some time but there have been enough positive signs to suggest he can run out a comfortable winner against Darren Webster.

Lewis made it only to the last 32 of the recent Ladbrokes Players Championship Finals, but his performance in a 6-5 defeat to Michael van Gerwen was promising.

Prior to that Jackpot made the quarter-final of the BoyleSports Grand Slam, emerging from a group that contained Van Gerwen, Jim Williams and Ross Smith.

Lewis managed a battling 3-2 victory over Cristo Reyes in his opening Ally Pally clash, and while that wasn't the most impressive display, Reyes is capable and had the benefit of a first-round win to call on.

Webster has struggled to recapture the form which saw him reach the world's top 16 and he could be emptied by Jackpot.

Fallon Sherrock made sure that Dimitri van den Bergh's 103.81 average in his 3-0 demolition of Josh Payne didn't make the headlines but it was probably the best performance of the tournament and he could put in another commanding display against Luke Woodhouse.

It's difficult to argue with Woodhouse's 3-0 win over Paul Lim and 3-1 beating of Michael Smith, but more is expected of Woody now than when he played Bully Boy, and he may struggle to replicate those performances.

It's evens that Dancing Dimitri can give Woodhouse a 1.5-set-start and that looks well worth taking.

Dave Chisnall struggled past an out-of-sorts Vincent van der Voort in the second round but he is unlikely to be let off the hook against Jeffrey de Zwaan.

De Zwaan wriggled through against Darin Young in round two but the American managed a checkout percentage of 52.94 and it's difficult to hammer anyone with those sorts of numbers.

Chisnall mustered a 93.1 average against Van der Voort despite hitting nine of his 14 double attempts, and he is likely to be put under more pressure by De Zwaan.

Chizzy is a top-quality operator who could easily move through the gears but that may not be as likely as the prices suggest.

Gary Anderson is another sleeping darting giant but he looks ready to wake up against Ryan Searle.

Anderson has been struggling for form but class is permanent and the Scot's scoring against Brendan Dolan in the second round was a blast from the past which bodes well for this contest.

The Flying Scotsman missed 18 darts to check out against Dolan and that kept his average down but his rhythm looked to be back and Anderson can call the tune against Searle.

Seigo Asada and Peter Wright survived almighty battles in round two and somehow both are still in the tournament.

Snakebite has seen seed after seed tumble at Alexandra Palace and he narrowly avoided joining them against Noel Malicdem.

However, a 96.53 average and near 50 per cent checkout success from Wright is not shabby and even a slight improvement on those figures should see the Scot claim a comfortable win.