The best bets for Saturday's football in Italy 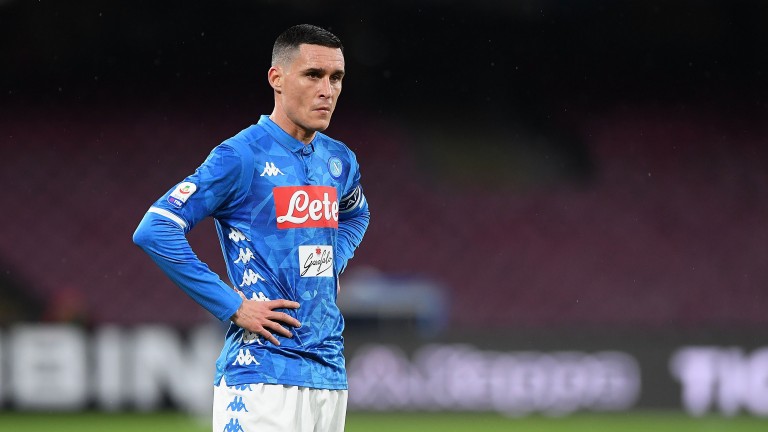 Jose Callejon has been a key component for Napoli in Serie A this season
Francesco Pecoraro
1 of 1
By Dan Childs UPDATED 6:28PM, JAN 26 2019

Napoli are doing all they can to hang on to Juventus's coat-tails and they can trim the gap to six points on Saturday by beating Milan at the San Siro.

Juve have a tricky game at Lazio on Sunday and that may offer encouragement Napoli, who are 13 points ahead of to fourth-placed Milan.

Key stat
Napoli have won six of their last seven Serie A games.

Sampdoria are 12 points ahead of Udinese in the Serie A standings and they can assert their authority when the sides meet at the Stadio Comunale Luigi Ferraris.

The club from Genoa have won four of their last seven league fixtures, having earned respectable draws away to Fiorentina and Lazio and pushed Juventus in a 2-1 defeat in the other three matches.

Their fine form, spearheaded by veteran marksman Fabio Quagliarella, who has 14 goals and five assists in Serie A, has put them in touching distance of a European spot in the division.

League aspirations will be top of their agenda after their Coppa Italia exit to Milan in their last home game and Udinese are unlikely to put up much resistance.

The Little Zebras have finished 13th, 16th, 17th, 13th and 14th in their last five seasons but bottom-half obscurity could turn into a relegation battle if they do not start stringing together some results.

They have just four wins from 20 matches this term and are significantly weak in the final third, with just seven players finding the net for them this campaign.

Udinese won the reverse fixture 1-0 back in August but the two sides have taken maximum points on the road once all season and should be comfortably beaten by Marco Giampaolo's men.